Marx & Philosophy Review of BooksReviews‘The Making of the Indebted Man: An Essay on the Neoliberal Condition’ reviewed by Lukas Slothuus 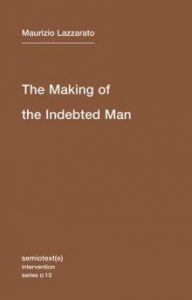 Maurizio Lazzarato
The Making of the Indebted Man: An Essay on the Neoliberal Condition

Maurizio Lazzarato’s essay The Making of the Indebted Man: An Essay on the Neoliberal Condition argues that the debtor/creditor relationship is the fundamental social relation under neoliberalism, and that class struggle today primarily plays itself out through this dichotomy. Hence, he attempts to decentre the worker/owner division in order to privilege the importance of debt as the driving force of contemporary capitalism. Situated explicitly after the 2008 crash, in Lazzarato’s view ‘everyone is a “debtor,” accountable to and guilty before capital’ (7), thus building on Bourdieu and Wacquant’s notion that neoliberalism has emerged as universal common sense, a divine given taken as self-evident. In this world, humans inherit not original sin but debt.

Crucially, Lazzarato does not seek to demote the ownership of the means of production to a subsidiary position. Instead, he specifies ‘public debt’ (rather than private debt) as the key component of the debt condition, thereby emphasising the structural, state-sponsored and systemic functions of debt as a driving force for neoliberal capital. In other words, ‘debt’ here refers to a condition, not a situation. The semantics at work might appear pedantic yet reveal the important underpinnings of the book’s arguments: This is not an essay against payday loans or high-interest car leases in themselves, it is a manifesto against the totality of debt as a tool and an agent of the capitalist mode of production in its entirety.

The book is divided into three sections. The first considers how debt is the basis of social life. The second chapter traces a history and theory of debt and the indebted, based on the works of Nietzsche as well as Deleuze and Guattari. Here, he provides not ‘a new totalizing theory of neoliberalism’ (35) but a reexamination of the current transformations caused by the debt economy. The third argues for the growing importance of debt and the debt condition under neoliberalism, using Foucault as a primary reference point. This structure provides a logical, partly chronological and highly persuasive framework for exploring the central role of debt as a requirement for capital to function. In particular, the first section transparently sets out the essay’s thesis, and is a concise point of entry into understanding how the neoliberal economy works.

The strength of Lazzarato’s work stems from basing its theoretical arguments on forms of praxis. Semiotext(e) has a record of insurrectionist publications to its name, purporting to ignite social struggles through multisyllabic philosophical treatises (see The Coming Insurrection and This is Not a Program). At the other end, though, Semiotext(e) also has works in its fold that emanate firmly from the activist-organising tradition (see Still Black, Still Strong). In between these nodal points, Lazzarato draws his conclusions from the materialist reality of manual workers in Ile-de-France, thus grounding his arguments in the lived and felt situation of those most acutely oppressed by debt. This is rather unusal for Semiotext(e)’s Intervention series, of which The Making of the Indebted Man forms part.

This type of activist-research is a welcome contribution to the sometimes esoteric ponderings of postmodern writing, and builds much needed solidarity with precarious workers. His drawing upon ethnographic research methods for a highly theoretical essay is skilfully executed and highly effective. It is therefore a shame that in both title and case study, Lazzarato omits any recognition of the oppression of women under debt. He thus ignores how traditional gender roles in the male-controlled financial world aid the structural forces of finance capitalism in (re)producing the debtor/creditor relation.

This is examined through a study of Deleuze and Guattari, Foucault, Nietzsche, and Marx. Lazzarato does not consider more recent contributions to the field, such as Graeber’s Debt: The First 5000 Years, whose last chapter beginning with the free-floating currency regime initiated by Nixon serves as a valuable historical companion to Lazzarato’s essay. Similarly, The Precariat: The New Dangerous Class by Standing is a useful text to read alongside this essay. In The Making of the Indebted Man, Lazzarato pins down two core paradigms of the debt economy: one, that credit rather than exchange of commodities is the essential feature of the social (inherited from Nietzsche, against e.g. Marx). This credit regime is asymmetrical in terms of power, in the sense that the role of debtor is by definition inferior to the creditor. Two, that not only does debt form an economic production (or relations of production), it also forms a production of subjectivity (or creation of identity); the subjectivity of the debtor.

Cutting through the very well-flowing even if occasionally dense prose, the book is at its most basic about how the logic of finance has entered the individual subject and public institutions. This leads to a vicious cycle in which public institution deficits are solved through debt, enabled at the mercy of private rating agencies, which leads to added revenue for financial institutions in the case of highly rated countries (such as the French unemployment benefit agency UNEDIC), or further deficits in the case of poorly rated countries (such as Greece, Ireland, Portugal, and Cyprus). Effectively, this puts the control and governing of social services in the hands of unaccountable, undemocratic private rating agencies. In other words, the creditor gains power beyond their mere lending activity; the debtor is not just someone who has debt but is an indebted subject. Such is the debt condition, and Lazzarato powerfully convinces the reader of its devastating scope and impact.

Unfortunately, Lazzarato does not give attention to the central role played by the EU and the European Central Bank in demanding austerity. In fact, he uses the term ‘Europe’ when he really means ‘the European Union’. The distinction is crucial, because the former term removes responsibility and agency from the austerity alliance led by Merkel and the troika, and the structural pressures from the EU to implement austerity, privatisations, liberalisations and outsourcings. Lazzarato, in emphasising the grand structure of neoliberalisation forgets the component parts that make possible the indebtedness of woman and man. Thus, the essay would do well with a critical examination of these crucial pillars of neoliberalisation. The author moves between the French particular and the theoretical general, without any intermediary midpoint. Nonetheless, his use of the French case is tenaciously researched, convincingly argued, and highly informative.

However, the crux of Lazzarato’s thesis, namely that indebtedness (not work) is the primary social relation under neoliberalism, is rather Eurocentric. As Terry Eagleton and many others have pointed out, the industrial working class in Western Europe might be significantly smaller in size than it used to be, but the global working class is bigger than it has been at any other point in history, probably even as a percentage of the world’s population as well as in sheer numbers. The debt condition, then, might be the lived reality of French urban manual labourers (a dying breed), but it is far from the predominant social relation in Bangladesh or the industrial provinces of China. If anything, the condition of debt in industrial-developing economies strikes mostly in the non-industrial sectors, thanks to the efforts for instance of agribusiness conglomerate Monsanto, majorly responsible for the serf-like conditions of destitution endured by many of India’s 300 million farmers today. This seems to pose a relevant challenge to Lazzarato’s thesis, yet he does not venture away from European-style indebtedness.

In the European context, however, the thesis is astute and sharp. Lazzarato builds a convincing case against the dominant Keynesian crisis narrative that ‘virtual’ and ‘real’ economies of finance and production must be brought back together. Instead, the author shows how the rise of debt as a key determinant of power and social relations under neoliberalism is a more accurate crisis narrative. This seems an instantly compelling idea, and the essay argues it well. Public debt created after WWII in the industrialised economies actually paved the way for the debt regime by enabling financial institutions to provide a solution: the recourse to financial markets. And this by no means is a right-wing project alone – indeed, Lazzarato points out how it was Mitterand’s Socialist governments in France that instituted this process.

What this suggests instead, and Lazzarato almost (but not entirely) makes this point explicit, is the central role played by the state in the development of the debt economy. Not only have states not regulated financial markets; they have actively opened them up. Not only have they not made sure the international financial instutions are democratic and just; they have actively established them in a manner that protects the wealth of the creditors and capital owners. Hence, when states attempt debt reduction, Lazzarato shows, this involves debt creation at the same time. Moreover, it directly bolsters the neoliberal project through public spending cuts, privatisations, and liberalisations. In Lazzarato’s words: ‘The power bloc of the debt economy has seized on the latest financial crisis as the perfect occasion to extend and deepen the logic of neoliberal politics’ (28). This is akin to Klein’s thesis in Shock Doctrine, yet goes further in the theoretical aspects of such a position. Thus, neoliberalism has a unique ability to dismantle the gains made through social struggles. This is the creative destruction of capitalism in the original, Marxian sense, and it is this very plasticity of capitalism which makes its dismantling so challenging.

The centrality of debt and indebtedness is not an original observation, yet Lazzarato systematically theorizes it. He builds on two key sources: Firstly, Anti-Oedipus by Deleuze and Guattari, which in turn builds on Marx’s theory of money, and secondly, Nietzsche’s Second Essay of The Genealogy of Morality. Nietzsche pointed out the basis of ‘debts’ (Schulden) in ‘guilt’ (Schuld), and Lazzarato argues this penetrates and permeates all aspects of the economy and, consequently, society. In characteristic whimsical manner, Peter Sloterdijk’s forthcoming publication in the Semiotext(e) ‘Intervention series’ has been assigned a cover page almost identical to Lazzarato’s. Sloterdijk’s work is a critique of the appropriation of and by Nietzsche as a brand and, by extension, a commodity. It will be interesting to see whether Sloterdijk’s argument detracts from Lazzarato’s poignant analysis of the debt economy.