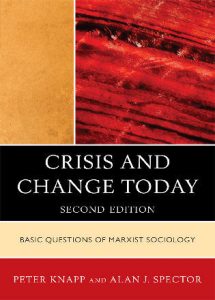 Titus Hjelm is Lecturer in Finnish Society and Culture at University College London. His most …

Looking at the plethora of sociology textbooks—tools for socialising students into the discipline—available in the English-speaking world today, Marx is almost without exception given an honorary place in the pantheon of sociology’s classics. Often, however, by the time the reader gets to Weber, the problem of ‘partisan’ Marxist approaches tends to relegate the tradition to the margins of the discipline—explicitly or implicitly. Yet, Marxist sociology never disappeared and, one could argue, is increasingly relevant in a world of economic crises, revolutions and imperialist wars: perhaps even more so than in 1991, when the first edition of Knapp and Spector’s Crisis and Change Today was published. Indeed, as the authors say, paraphrasing Michael Burawoy: ‘The demise of the Soviet Union, far from spelling the demise of Marxism, would lead to its liberation from apologetics and further development’ (xii). The two decades after the ‘end of history’ have, if anything, proven Marxism indispensable for a critical analysis of the modern world.

Crisis and Change Today is a textbook. That means that it has few new ideas to offer for left theoretical concerns. But as a textbook it plays a potential role in introducing young readers to those concerns. Hence my focus here is to look at how the book succeeds pedagogically in imparting Marx’s ideas on the one hand, and as an introductory sociology book on the other.

The book is divided into four parts. The first deals with Marx’s theory of history and change; the second is dedicated the primary role of the economy in Marx’s thought; the third part moves on to Marxist political theory; finally, the fourth discusses dialectics as a methodology for analysis and as a philosophy of science. The Marxism that emerges from the discussion is first and foremost a science. This means tackling the tricky problem of combining detached analysis with political commitment, which is dealt with quite extensively. Politics, however, seems to trump science when, for example, the authors describe pacifism as a form of ‘opportunism’ (268) and back their (at least implicit) preference for violent revolution with data from Gamson’s well-known The Strategy of Social Protest (1975). Assessing the effect of violent versus nonviolent protest is problematic, the authors agree, but ‘doing it formally with a sample is better than biased impressions of a handful of cases. There is a strong tendency for people to want to believe that those things which they find morally and normatively objectionable are also objectionable strategically’ (242). Yet, the authors extrapolate a general pattern from a study of 53 US protest movements—a handful of cases on the global scale, surely—which, in addition, has been shown to be erroneous and problematic in its assumptions and methodology (Goldstone 1980; Chenoweth & Stephan 2011). Violent protest or revolution might have its merits politically, but its ‘scientisation’ falls short on the very premises that the authors criticise. The above detour doesn’t, however, take credit away from the book as a whole, but it does demonstrate that questions of science, politics and ethics are an on-going discussion within Marxism, rather than solved with any simple scientific formula. All in all, the book covers Marx’s thought comprehensively, with some illustrations from more recent Marxist work. As such it is a good introductory text.

On to sociology, then: My first thought after finishing was ‘is this book really about sociology’? To me, a more appropriate title would perhaps be ‘an introduction to the thought of Karl Marx’. Why? Marx—and the vast majority of the ideas presented come directly from Marx, not the sociological tradition carrying his name—obviously had a lot to say about things that the discipline that became known as sociology is interested in. Yet, the starting point of the book is the canon of Marx’s thought, not what sociology has considered its main problems and questions. There is some interaction, especially with the ideas of Durkheim and Weber, but it is very light touch. Also, this interaction is oddly referred to as ‘Marx’s main disagreement with Durkheim and Weber’ (246) or as ‘Marx agrees with other theorists in sociology, Durkheim and Weber’ (286). Marx of course did no such thing; little Émile and Maximilian were still learning to walk while Karl was drafting Das Kapital. Small detail, granted, for those versed in the history of sociology, but one that becomes more significant in a text aimed at sociology undergraduates.

The choice of organising and presenting the material is of course justified: Marx’s theory was much broader than a narrowly defined disciplinary focus so common today. Indeed, as Colletti (following Schumpeter) has argued in ‘Marxism as Sociology’ (1972), there is an essential ‘unity’ of sociology and economics in Marx. Hence, Marx should be read as Marx. Yet, from a pragmatic-pedagogical perspective—regardless of how much one might detest the atomisation of academic disciplines—this then raises the question: what makes this a good textbook for sociology courses, specifically? The mere existence of Crisis and Change Today is a welcome reminder that Marx(ism) indeed has many things to offer to sociology, but I find it hard to imagine using the book in class without substantial supplementary reading that puts Marx’s ideas into the context of sociological inquiry.

A couple further points: First, the text is narrowly aimed at an American audience. While this can be an advantage, especially when ‘unmasking’ taken for granted assumptions about society, it also makes the book less attractive for readers outside of the United States. Second, the exercises in the book are, with some very useful exceptions, extremely challenging for newcomers to Marxism or sociology. I can imagine that with a little hand-holding in class they can be very instructive. The lone reader, I’m afraid, will be often confused. Finally, although each section has its own ‘further reading’ section, the lack of proper bibliography at the end of the book is unfortunate.

In sum, Crisis and Change Today is a good, comprehensive, introduction to Marx and—to a lesser degree—Marxist thought. Its links with the rest of the sociological tradition are, however, underdeveloped, which makes one wonder about the book’s usefulness in current sociology curricula. This, of course, is unfortunate because—if I may be allowed an admittedly biased opinion—the world needs Marxist sociology and a new generation of Marxist sociologists more than ever.