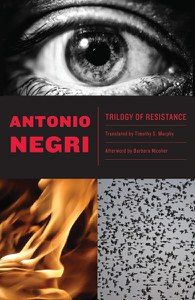 Harrington Weihl is a Master’s candidate and writing instructor and West Virginia University. …

Antonio Negri’s departure into theatre is not as uncharacteristic as it might initially seem. The link has typically been stronger between theory and theatre than between theory and any other literary genre. Jean-Paul Sartre’s most well-known and influential literary works are his plays, and Bertolt Brecht approached radical politics through theatre, as he developed an aesthetic philosophy of alienation called ‘epic theatre’, which was meant to call into question the naturalness of capital. Negri is consciously working in this tradition in Trilogy of Resistance: he states in the Preface that ‘Above all I wanted to take up the communist tradition of the epic theater again and try to restore its image for the postmodern era’ (3). Superficially, at least, he succeeds in this, as the plays resemble neither the Aristotelian dramas of the classics nor the modernist epics of Brecht. Rather, the plays are unashamedly didactic – as the subtitle indicates – and approach problems of resistance, violence and political commitment through the critical vocabulary that Negri has developed, helping further define and illuminate the concepts of ‘swarm’, ‘multitude’, ‘common’ and ‘exodus’.

The plays are introduced by the translator, Timothy S. Murphy, whose adaptation is readable without sacrificing Negri’s characteristic style. Murphy’s introduction situates the plays nicely within the author’s field of ideas for readers unfamiliar or only partially familiar with Negri’s work, referring to the Trilogy as a ‘Pedagogy of the Multitude’ (ix). Furthermore, Murphy goes to some length to outline the theatrical tradition within which the Trilogy is positioned, acknowledging Brecht and his postmodern compatriot Heiner Muller (about whom Negri wrote with Felix Guattari) as the author’s two biggest theatrical influences. Indeed, in his preface Negri states that though through the plays he seeks to revive epic theatre, the conditions of ‘social transformation’ (3) have changed since the heyday of Brecht.

That Negri succeeds in this is clear – the didacticism of the plays is what ultimately enacts their transformative and alienating character. The alienation here is aesthetic and as such, revolutionary in Marxist terms: the suspension of Aristotelian immersion in the drama of the narrative allows for the plays to operate pedagogically, serving as what Murphy, borrowing from Fredric Jameson and other Brecht scholars, calls ‘master class’ wherein rehearsal and repetition can open space for debate and the exploration of alternatives to the capitalist order.

The first play, Swarm: Didactics of the Militant, written in 2004, stages the internal struggle of an anti-capitalist militant whose conversations with the Chorus lead the audience on his journey from Indignation and Hatred (the titles of the first two scenes) to Resistance, Swarm and finally Exodus (the final three scenes). The physical action of the play centres around first the donning and then the eventual removal of a suit of explosives meant to be used in a suicide bombing. Negri makes clear that this is a decision fuelled by the hatred that the Man who desires ‘[t]o die . . . dreaming of the groans of a massacred enemy, the terrified screams of those I will have wounded and mutilated’ (12-13).

The suit of explosives is eventually removed, however, and as the scene entitled Resistance begins, the Man reflects that ‘ [b]y stripping myself naked, I’ve reached the source of life: by means of poverty I have touched the lowest point of existence; but that point is not one of solitude because poverty is common. Through poverty I am a multitude’ (21). The Man, now multitude and guided by the chorus, first embraces and then disavows the party form and arrives at the Swarm. Swarm, for Negri (and as expounded upon in Multitude, which he introduced in 2004 along with Michael Hardt), is a diffuse form of resistance ‘that invents its own networks and expresses aggressiveness through them – thousands and thousands of actions that disorient the adversary, a live swarming that takes unexpected forms and irresistible dimensions’ (27). The Swarm is followed by Exodus, a concept that, while implying movement, does not travel, but rather generates, and is incited by the metamorphosis of resistance via the Swarm. The play concludes with the man asserting that ‘a new world is possible, a world of the living, a world of lovers’ free from the ‘[t]he flesh of man . . . the primary material of exploitation, the body of power’ (31).Swarm is, among other things, ultimately a meditation on political violence and its place in the new model of resistance by the multitude that Negri has outlined in his critical work.

The escapism and nascent romance of the exodus in Swarm would, in isolation, leave much to be desired. In the second play, however – The Bent Man: Didactics of a Rebel – the flesh of man quite literally takes up the cause of resistance. The second play is, unlike the others, historically rooted: the eponymous character is a woodcutter living in Italy during World War II, and undertakes an embodied resistance to the fascists by bending his body over in order to avoid service in the fascist war effort. With the encouragement of his wife and his friend, the imprisoned eponymous character resists the inquisitions of first the doctor and then the priest, and is eventually released when the fascists are temporarily deposed by advancing allied armies.

Though the literal bending ends there, the resistance that it inspired accelerates. To his friend, the Man builds on the concept of resistance: ‘the new world knows only resistance … When I bend in order to avoid accepting the rules of their authority, I am destroying the foundations, I am insulting their legitimacy – I am sawing through the support beam of their power’ (57). In a time of war, the Man’s abstinence from violence is a self-conscious act of resistance. With the return of the fascists, however, that abstinence ends. Reunited with his newly pregnant wife, the Man defends his choice of violence as the need to ‘defend our common … now what do we do with these Nazis and fascists who want us dead? … I tremble at it, my friend, but we cannot refuse this terrible twist of fate’ (64). The Man eventually uses mining explosives to bring the mountain that overshadows the village down onto the advancing fascists and loses his life in the process. At the end of the play, the surviving characters directly tell the audience the meaning of the play: ‘the swarm of the multitude is always capable of creating events of rebellion …War on war, always, with the soul and the body, singularly and in common … What we call the Man is nothing other than an affirmation of common freedom’ (75). The end of the play, as didactic as it is, expands on the capacity of the swarm – this time by violent means – to defend the common, which here we find created both in the village and in the form of the unborn child of the Man and his Wife. The didacticism of the finale balances the emotional power of the play itself, which is a departure from its predecessor.

The third and final play, Cithaeron: Didactics of Exodus, written in 2006, brings the trilogy to a close with a departure into the realm of myth. Dionysus, the titular figure in Negri’s first collaboration with Michael Hardt in 1994’s The Labor of Dionysus, returns to the author’s work here in the form of ‘a young man from the suburbs’ (92). He mediates a revolt in Thebes that culminates in the death of the King, Pentheus, as ordered by his mother Agave on the mountain of Cithaeron. Crucially, Agave and the play call into question the theme of the guilt of the mother that has been imposed on the myth: ‘[p]erhaps you think that it is easy to separate the blond curls of your own child from those of all the little boys who were the children of victims persecuted by the tyrant?’ (113). Agave places her membership in the common ahead of the maternal responsibilities imposed by power. Cithaeron, whose narrative is framed by the story of ‘a young mixed-race woman’ (80) watching the play via the internet, incorporates a much needed critique of gender into a trilogy that is, up to that point, dominated largely by men and the discourse of ‘the worker’.

Cithaeron is the only play that is opened by an Author’s Note, wherein Negri claims that this final play ‘concludes nothing. The hope of exodus is swallowed up in tragedy, and . . . the theoretical decision, the ethical drama, and the political madness that by turns haunt the heart of the one who has chosen exodus’ (78). Thus, as Negri states, the plays do not outline a path toward resolution, but instead the perpetual struggle that is resistance. They chart the tension between violence and non-violence, the endless cycle of consequence, reaction and reconsideration that comprises exodus. In fact, as the trilogy ultimately makes clear, exodus is not the escape that it initially appears to be, but rather a head-long plunge into unending struggle.

The Afterword to the collection, in which Barbara Nicolier describes her experience with staging the plays, nicely encapsulates the utility of the plays, which were staged first at the Theatre National de la Colline in Paris, and afterwards repeatedly at several French universities. These latter performances were accompanied by occupations and demonstrations and led the actors, according to Nicolier, to greater ‘freedom, virtuosity and autonomy’ (122). These latter performances attest to the ultimate success of Negri’s trilogy for the stage: their didactic tone is perfect for the participatory instruction with which the author seeks to build the multitude, construct the commons and incite resistance. In a rare venture into the literary realm, Antonio Negri has put forth theory that is more easily enacted and embodied than anything he has previously produced. In the wake of crippling austerity and the broad failure, or at least dormancy, of movements such as Occupy, the generative potential of exodus as a process that at once incites both escape and engagement proves the pedagogical value of Negri’s plays.