Marx & Philosophy Review of BooksReviews‘Of the People, by the People: The Case for a Participatory Economy’ reviewed by Paul Raekstad 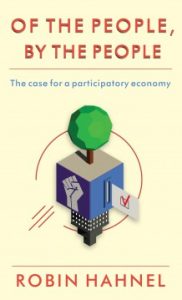 Robin Hahnel
Of the People, by the People: The Case for a Participatory Economy

Those disillusioned by ‘real socialisms’, whether market socialist or centrally planned, face the question of how we are to conceive of a feasible socialist alternative. At present there are two theoretical models for a genuinely democratically planned socialist economy, one developed by Pat Devine, and the other by Michael Albert and Robin Hahnel. Hahnel’s Of the People, By the People is the latest, clearest and most concise exposition available of the latter model, Participatory Economics – or ParEcon for short. Not only does to this book show, to my mind convincingly, that there is a viable model of genuinely democratic socialism from the bottom up, it also, in so doing, provides a powerful argumentative tool for countering (at least certain kinds of) political scepticism.

The book is penned above all as a counter-argument to Thatcher’s famous saying TINA – ‘There Is No Alternative’. In the past, Hahnel writes, opponents of capitalism could point to Russia, China, or other countries claiming to be socialist, today these alternatives are widely discredited. Hahnel’s purpose is to argue not only that there is an alternative to capitalism, but that there is a feasible and better alternative to capitalism; one in which workers plan and manage themselves without markets or central planners. His reasoning behind this goal is as follows:

After a brief introduction and discussion of the model’s origins in the revolutionary experiences of the past and present centuries, Hahnel’s presentation begins, in Chapters 3-7, with a list of goals he believes a model of a future society should live up to. Once these are laid out, he moves on, in Chapters 8-15, to discuss ParEcon’s institutions, their feasibility, and how they measure up according to his specified goals – with asides on questions such as the possibility of work being life’s prime want, remuneration, and the role of incentives. He finishes off with brief chapters on long-term planning, environmental issues and strategic concerns.

A future economy should, Hahnel argues, aspire to economic democracy in the sense that people have decision-making power over decisions in proportion to the degree to which they are affected by them, it should be economically just in the sense of distributing economic rewards according to effort and sacrifice, and it should be sustainable in the sense that it should leave the stocks of each important category of natural capital as large as they are today to future generations, Moreover, a future economy ought to be efficient, where something is efficient if and only if ‘the overall benefits to any and all people of doing something outweigh the overall costs to any and all people of doing it’ (39). Finally, a future economy should promote solidarity in the broad sense of furthering concern for the well-being of others, and variety in the sense of ‘achieving a diversity of economic life styles and choices’ (42).

ParEcon features social ownership in the means of production in the sense that worker and consumer councils have and grant users’ rights in the planning process. Every workplace is run by one or more worker council in which all workers participate to decide on how the workplace is run, how the plan is executed, the criteria according to which the council’s remuneration share is distributed among its members, to elect representatives to federal levels, vote for recall, etc. Likewise, all neighbourhoods are organized into consumer councils where each member submits their personal consumption request, participates in decision-making about which public goods to request during the planning procedure, elects representatives to federal levels, votes for recall, etc. Everyone not too young, old or disabled is a member of one each of these councils.

This planning process is to function as follows: First, ‘opportunity costs’ are estimated by facilitation boards for natural resources, categories of labour and capital stocks, pollution, and the estimated social costs of producing different goods and services. These function as ‘indicative prices’ to help guide the planning process, but the planning process itself is in no way bound by them. Next, worker and consumer councils submit proposals for what they wish to produce and consume. Facilitation boards then adjust their estimates in light of this new information, and the process is repeated until proposals for production and consumption match sufficiently. Consumption proposals are made by the consumers and federations concerned themselves, and evaluated by councils and federations by comparing the estimated social costs of a proposed consumption bundle with the total consumption allowance of the proposers. Similarly, production proposals are formulated and advanced by worker councils and federations themselves and evaluated in terms of their estimated social costs and benefits. This process, Hahnel maintains, supports worker and consumer self-management and encourages widespread participation in that:

(1) Every worker has one vote in his or her worker council. (2) In large worker councils sub-units can govern their own internal affairs. (3) Consumers are free to consume whatever kinds of goods and services they prefer as long as their effort rating or allowance is sufficient to cover the overall cost to society of producing the goods and services they request. (4) Consumers each have one vote in her neighborhood consumption council regarding the level and composition of neighborhood public good consumption. (5) Federations responsible for different levels of collective consumption and limiting pollution levels are also governed by democratic decision making procedures where each council in the federation sends representatives to the federation in proportion to the size of its membership. But most importantly, in the participatory planning procedure (6) worker and consumer councils and federations not only propose what they, themselves, will do in the initial round of participatory planning procedure, they alone make all revisions regarding their own activity during subsequent rounds. (96-7, emphases in the original.)

Hahnel’s prose is crisp, clear and to the point. This book – as much a short book as a long pamphlet – is easily the best introduction to the ParEcon model currently available. As befits the format, there are almost no references and only a handful of footnotes. Generally this is a virtue. However, there are a few points where certain strong and critical empirical claims are made which really ought to be properly referenced. For example, in the chapter on work, Hahnel writes about ‘the ample literature documenting the advantages of employee self-management’ (53). This is a very important point and, although well-established, this premise is highly controversial in political debates. After all, one of the most common concerns about a democratically planned society vis-à-vis capitalism is the latter’s supposed powers of motivation. For those who share this concern, a claim such as Hahnel’s would both be rendered much more convincing by reference to its scientific support, and empower a critical reader to look into the subject and find out for themselves. Furthermore, the presentation of participatory planning would have benefited from more detail.

Two things in particular stand out in this latest exposition of ParEcon. Firstly, it discusses the inevitable complications of long-term planning – an omission for which the model has rightly been criticised in the past. In particular, Hahnel acknowledges the need for a greater role for representatives in deliberating and formulating long-term plans for investment and development compared to those concerned with annual production/consumption.

Secondly, this new exposition features a fresh engagement with Marxist thought. Hahnel argues that greater self-management and technology focused on making work more desirable will allow work to become one of life’s prime wants. However, he argues that it cannot be assumed that all tasks will thereby become desirable in and of themselves, as a result of which distributive rewards for the less rewarding and more onerous work still have a part to play. Although a model of socialism should hope to nurture the best of human nature, it must also be able to withstand less than perfection.

Traditional Marxism and anarcho-communism differ with ParEcon on distributive maxims; to each according to their needs versus to each according to their effort and sacrifice. Hahnel defends ParEcon’s position whilst making, I think correctly, the point that more important than such principles is the organization of power and decision-making through which any distributive principles are enacted and maintained. On this more foundational question there need be, he claims, no contradiction.

With its lucid and direct mode of presentation, together with the skill at which it engages with a variety of topics and concerns, this book is not only the best place to start looking into the ParEcon model, it also presents the most developed version of that model so far.