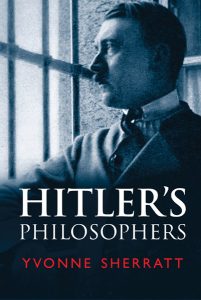 In Hitler’s Philosophers, Yvonne Sherratt sets out to “uncover the lives and context of German Philosophers who were active under, and in some cases after, the Third Reich” (262). Sherratt’s aim is to give an account of the formation of the anti-Semitism that is latent in the history of modern philosophy, and to show the role that philosophy played in the formation of Hitler’s Germany. Sherratt lifts the veil that conceals the philosophers hidden behind their ideas. She uses a narrative style to convey this historical account, deriving her sources from archival material, letters, photographs, verbal reports and descriptions to reveal that culpability goes beyond Hitler and the Nazis tried at Nuremberg.

Hitler’s Philosophers is divided into two sections. The first describes the harm caused by the manipulation of ideas, and gives an account of Hitler’s perversion of the intellectual atmosphere to conform to his philosophy. The second section shows the value gained through the hope and opposition of the few philosophers who refused to accept Hitler’s rule.

Sherratt describes Hitler’s life and philosophy, and provides ample evidence that philosophy provided a false façade for his pose as the philosopher-leader of the German people. She shows how Hitler worked out his plans in 1924 while incarcerated for “high treason and radical political actions in the name of National Socialism” (2). During his year of incarceration, he built his political contacts, studied philosophy, worked out ideas with fellow convict Rudolf Hess, and wrote Mein Kampf. He light heartedly spoke of the time as like being at a “University paid for by the State” (6).

Sherratt shows the formation of Hitler’s racist philosophy by tracing his various philosophic influences. Hitler said that during his incarceration his only pleasure was from his books (18). He worked his way through many biographies, and was inspired by their “racist and militaristic” lives (ibid). He had a particular fascination with Kant, often quoting him during campaign speeches. Sherratt shows that Hitler’s pontifications merely flaunt an expertise that is “superficial and amateur” and that his acquaintances said that he “rarely reads a book through” (18). Along with Kant, Hitler liked to borrow quotes from Friedrich Schiller, who was “admired not just by Hitler but by all the Nazis because he was highly patriotic and a German nationalist” (19). Additionally, Hegel’s philosophy served as a common trope of his philosophic prowess when arguing for the “historical view of the formation of the state from ancient origins” (20). Fichte, Schopenhauer and Nietzsche are also identified as the “philosophical triumvirate of national Socialism” (21). Sherratt shows that Hitler worked hard to display his philosophical knowledge and promote his image as philosopher-leader. From his claim of carrying Schopenhauer with him in the trenches of World War I, to the walking stick he received as a gift from Nietzsche’s sister, Sherratt shows that, “Hitler was a mosaic of influences” (20).

She next describes how Hitler hijacked the transmission of knowledge, taking control of the education system and manipulating the publishing houses. She writes, “Traditional university institutions were about to be blown away and old scholarly values were about to be demolished. A blitz that was just as deliberate, damaging and far-reaching as any aerial bombardment” (61). Hitler accomplishes this by taking control of all aspects of knowledge. He tried to rid the country of all Jewish intellectual influences by firing professors such as Edmund Husserl, and burning the books of Jewish philosophers such as Spinoza, Marx and Moses Mendelssohn (74).

Sherratt then focuses on the philosophers who aided the proliferation of Nazism and its ideology. She shows how Alfred Rosenberg took control of religion. He claimed that, “Jesus was a member of a Nordic enclave resident in ancient Galilee that had struggled against Judaism,” thus tying the Nordic race to Christianity (66). He controlled the curriculum by “deciding upon which philosophers and their writings were valid,” even denouncing Socrates as a “social democrat” (77). She shows how Rosenberg’s influence on the Universities “destroyed the old university values of tolerance, inclusion and democracy. Peace was now under threat. In its place, permanent bloodshed was advocated. War was the perfect goal, an understanding of its value indispensable to a Nazi education” (82). Sherratt spends the last two chapters of the first section laying out the exploits of Carl Schmitt and Martin Heidegger, both of whom were members of the Nazi party. She describes Schmitt’s support for the purging of German opposition to Hitler, stating that, “Schmitt was quick to support the legitimacy and legality of the purge. He justified the political murders as the ‘highest form of administrative law.’” (98).

She characterizes Heidegger as “Hitler’s Superman” (102). Heidegger was eager to support Hitler and, after joining the Nazi party, he claimed that the construction of National Socialism “has now become the single most important task for the German universities” (104). He praised “Hitler’s goals and hailed Nazification of the universities as ‘national labor of the highest kind’” (104). Sherratt shows his devotion to Nazism in a quote that is characteristic of his philosophy, “May you ceaselessly grow in courage to sacrifice yourselves for the salvation of the nation’s essential being and the increase of its innermost strength in its polity … The Führer himself and he alone is the German reality, present and future, and its law … Heil Hitler!” (118) She leaves no doubt as to Heidegger’s culpability and provides evidence that shows he advocated race studies “in order to preserve the health of the state,” and that he also held that, “questions of euthanasia should be seriously contemplated” (120). Sherratt shows that Heidegger never expressed remorse for his involvement with the Nazis, nor is there evidence that he “suffered sleepless nights in his native Germany while millions of Jews were sent to the slaughterhouse” (120).

The second half of the book focuses primarily on three Jewish German philosophers who opposed Hitler: Walter Benjamin, Theodor Adorno and Hannah Arendt. Sherratt’s primary concern in this section is to show “their distinctive intellectual stance as a result of confronting Nazism, their cultural affinities, and the fact that their lives were interconnected – both with each other and also with Heidegger” (126). Sherratt’s research ties the thinkers together through an interesting interplay of ideas, romance and war. She describes the love affair between Heidegger and Arendt. She shows how Benjamin and Heidegger were classmates in Heinrich Rickert’s lectures (138). A letter from Benjamin shows the closeness of his relationship to Adorno and expresses his opposition to Heidegger (144). Sherratt describes the conflict which ensued between Adorno and Arendt when Adorno rejected Arendt’s first husbands’ Thesis for being too influenced by Heidegger. Moreover, Adorno was bothered by Arendt’s post war support for Heidegger. Later, after Benjamin’s death, Arendt gave Adorno Benjamin’s unpublished manuscripts that Adorno later published, preserving Benjamin’s final philosophic works (202). Lastly, Sherratt shows how Arendt’s view of Heidegger changed. Arendt realizes that Heidegger’s signature on a letter “almost killed him [Husserl], I cannot but regard Heidegger as a potential murderer” (244). Later, however, Arendt came to view Heidegger in a more sympathetic light (like many others), and she helped to “reestablish Heidegger on the world stage,” by providing him with connections to Jewish publishers (245).

The main problem with Sherratt’s text is its narrative style. I feel that her attempts to take the reader through unnecessarily descriptive explanations often detract from her research, I found myself repeatedly checking her notes to see whether she was taking artistic license in the delivery of the material. That aside, Sherratt relates the lives of these philosophers well. Her biggest contribution is in highlighting the importance of the philosophers who opposed Nazism. Arendt contributed greatly to philosophy: she situates the evils of the Holocaust within history, writes on the banality of evil, and explores violence and totalitarianism. Adorno and Benjamin are some of the leading philosophers of the Frankfurt school. Their philosophies contribute greatly to critical theory and to Marxism. Sadly, as she points out, “in spite of their enormous accomplishments, [they] have never been admitted into the philosophy canon in the English-speaking world” (260-1). The irony is that Schmitt and Heidegger, though they were Nazis, are regularly taught in universities throughout the world. She closes by urging the reader to explore the often overlooked philosophies of Adorno, Arendt and Benjamin, and calling for a greater accountability of the philosophers whose Nazism remains hidden from view while their ideas proliferate.