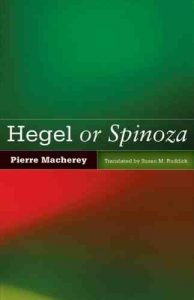 The charge of teleology has long plagued Marxist conceptions of history. In 1877 Marx himself responded to criticism that the historical presentation in part VIII of Capital preordained the stages of history’s long march to communism by noting that he had not given a ‘historico-philosophical theory of general development, imposed by fate’ but only offered a ‘historical sketch’ of one possible sequence (Marx and Engels 1987, 200). However, in the twentieth century such criticisms re-emerged in the wake of the historical impasse of Stalinism, which undermined any positing of communism as the necessary result of history’s dialectic. Macherey’s work enters this debate by attempting to save Marxism from this apparent historical refutation. The promise of Hegel or Spinoza, originally published in French in 1979, is therefore that by separating the dialectic from its teleological form, a new mode of politics emerges through what may seem a rather narrow and abstruse philosophical issue, namely, the critique of Hegel’s reading of Spinoza. For while the book is firmly presented in the philosophical register, such appearances cannot be separated from its political motivation.

The entwinement of the philosophical and the political can be seen in what we may call the ‘Spinozist turn’ in French philosophy of the twentieth century. Although Hegel had gained a certain centrality during the 1930s and 1940s, due to the lectures of Alexandre Kojève and Jean Hyppolite, by the 1970s this influence was decidedly on the wane. It was the year 1968, with the publication of important studies by Gilles Deleuze and Michel Géroult, which we may isolate as the moment at which Spinoza’s philosophy gained new currency. At the same time, the events of May ’68 in Paris, which followed on from the largest general strike in history, crystallised the need for a politics beyond the orthodox Hegelio-Marxism of the French Communist Party (PCF). What is curious, given our present concerns, is that by the time Macherey came to publish Hegel or Spinoza, Hegel’s thought was inoperative both in philosophical theory and in political practice.

Macherey’s resurrection of Hegel, even if only to refute his reading of Spinoza, can be partially illuminated by considering his relation to the work of Louis Althusser. Althusser’s attempt to establish the scientificity of historical materialism was itself formed in response to the de-Stalinisation which followed Nikita Khrushchev’s ‘secret speech’ at the Twenty-Second Congress of the Communist Party of the Soviet Union. The effect of this ‘revelation’ of the crimes of Stalinism on the PCF, of which Althusser and Macherey were members, created the need to reinvigorate Marxism in order to avoid both its Stalinist codification and the de-Stalinisation that was by Althusser’s reckoning still all too Stalinist. For Althusser, it was the Hegelian dialectic which was responsible for this deadlock and hence to rethink the dialectic of Marx was to erase all Hegelian inflections. This act of erasure would be conducted by Althusser and his colleagues in and through the turn to Spinoza, or as Althusser himself later reflected, ‘we made a detour via Spinoza in order to improve our understanding of Marx’s philosophy’ (Althusser 1976, 134). Hegel or Spinoza may therefore be motivated by the need to elaborate this detour by returning to issues raised in the seminar organised around Althusser which produced Reading Capital, the English translation of which unfortunately excluded Macherey’s contribution.

Macherey’s continuation of the Althusserian tradition is clear in his use of the ‘symptomatic reading’, which was the method developed in Althusser’s seminar in order to understand Marx’s critique of classical political economy. Consequently, Macherey will focus not on the similarities and differences between Hegel and Spinoza, but on the moments of tension produced by the proximity of their respective systems. It is Hegel’s very refusal to admit such proximity that will have ‘the value of a symptom’ (11). The errors produced by this refusal will not be explained away but will become the focus of Macherey’s freeing of Spinoza from the ossification enacted by Hegel’s ‘formidable misreading’ (11). Spinoza’s thought may then be utilised to overcome correspondent ossifications on the political scene, viz., the interpretation of Marx by Stalin and the PCF.

The operations of this method are apparent from the very opening of Hegel or Spinoza in which Macherey justifies the posing of Spinoza as a live alternative to Hegel. While this may seem non-problematic, Macherey notes that it requires nothing less than the overturning of ‘the evolutionary conception of the history of philosophy’ (12). It is this temporal codification of philosophy’s history which Hegel introduced in order to confine his predecessor’s thought to the past. Nevertheless, in the liberation of Spinoza from the fetter of chronology, it is still necessary to go through Hegel’s reading of him since ‘between Spinoza and us, there is Hegel, who intervenes or intercedes’ (9). To work through the consequences of this intervention will be Macherey’s chief aim.

But perhaps more important than this positing of Spinoza as an alternative to Hegel is what both thinkers are themselves alternatives to. For when we read that ‘the problem is that of the dialectic’ (11), we should be aware that the problematic to which the dialectic is addressed is that of thinking a break with what Macherey terms ‘classical reason’. For Macherey classical reason circulates between three conceptual nodes: an intentional subject, a hierarchy of thought and being, and, perhaps most importantly of all, the teleological thinking of ends. This triad is exemplified by the systems of René Descartes and Immanuel Kant, and it is Hegel’s constant reduction of Spinoza’s thought to the systems of these other philosophers that is fundamental to his inability to comprehend the specificity of Spinoza’s own system. The stakes of Hegel or Spinoza are thus found in the possibility of producing a rupture with traditional modes of thought. Philosophically this means a break with classical reason; politically it is a break with Stalinism. It is then a question of who achieves this break – Hegel or Spinoza.

We can now comprehend the structure of Hegel or Spinoza. In Chapter 1 Macherey details Hegel’s ‘reconstruction’ of Spinoza’s system as he presents it in his Science of Logic. From this reconstruction Macherey picks out what he sees as its three most important elements, these being, method, the relation of attributes to substance, and the role of negation in determination. Each one is then explored in the three remaining chapters of the book such that we will find the precise operation by which Hegel misinterprets Spinoza’s thought as belonging to the matrix of classical reason.

In Chapter 2 we see that in charging Spinoza’s method – the ‘more geometrico’ – with formalism, Hegel has assumed that it is a mere extension of the method of Descartes. This prevents him from noticing that by making truth immanent to method Spinoza has constructed a position in ‘radical opposition’ (54) to that of classical reason. Then, in Chapter 3, we find that it is the viewing of Spinoza’s discussion of the attributes through the prism of the Kantian intellect which gives rise to ‘the contempt Hegel directs towards Spinoza’s philosophy’ (108). It is this contempt which prevents Hegel from seeing how Spinoza moves beyond the subject-object dualism of classical reason. Through this reading of the reductions and distortions of Hegel’s interpretation, Macherey has exposed these symptomatic points as those which, in fact, mark the interconnection of Hegel and Spinoza’s thought. Such innovations in method and epistemology are precisely those we may readily attribute to Hegel, and yet he himself was unable to credit them to Spinoza. This leaves us with a paradox inasmuch as ‘Hegel declares himself furthest from Spinozism exactly at the point on which the two doctrines appear to coincide’ (72).

The answer to this riddle will be laid bare in the fourth and final chapter. We have seen that Hegel failed to note the ways in which Spinoza had broken with classical reason, and yet it is precisely such an achievement which Hegel took as being his own. For Hegel it was the concept of ‘the negation of negation’ which he saw as enacting this break, and it is this notion of negation which Spinoza was not able to grasp. However, Macherey demonstrates that ‘It is precisely on this point where Hegel pretends to break with prior tradition, that we can equally say he renews it’ (207). Hegel’s mistake was to assume that the maintenance of teleology, whereby negation is subsumed to the production of a predetermined goal, would be compatible with the radical transformation of subjectivity and hierarchy. It is not. This mistake then returns in the symptoms of Hegel’s inability to recognise those elements of Spinoza’s system which, despite their proximity to his own thought, are more successful in breaking out from the confines of classical reason. We can now see the sense in which, insofar as he thereby critiques classical reason, Spinoza also ‘refutes Hegel, objectively’ (9).

With this uncovering of the source of Hegel’s misreading, Spinoza’s thought can now be utilised in elaborating a dialectic which acts outside the matrix of classical reason. Such a dialectic would be thoroughly materialist since it would operate without the guarantees of teleological thinking which are themselves expressions of Hegel’s idealism. Although we are not presented with a full explication of this materialist dialectic, and it perhaps suffers from its merely philosophical presentation, it is clear that Spinoza’s system, with its ‘radical refusal of all teleology’ (52), may provide many of the tools for its construction.

Macherey thereby ends Hegel or Spinoza by exposing the limitations of Hegel’s dialectic while raising the possibility of a delinking of dialectic from its teleological form. The fruits of such a possibility are to be sought in the genuine overcoming of tradition which can only be forged through a ‘non-Hegelian dialectic’ (213). If we refer this back to the political motivation of the work, we can see that just as Hegel’s system was a false break with classical reason, so the PCF’s programme of de-Stalinisation was a false break with Stalinism. The task that Hegel or Spinoza leaves its readers is therefore that of returning to Marx’s writings in order to develop a dialectic adequate to the thinking of a rupture within the present situation.