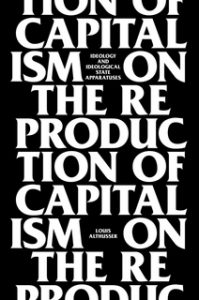 Louis Althusser
On the Reproduction of Capitalism: Ideology and Ideological State Apparatuses

It has been more than 40 years since Louis Althusser’s most read and influential work – ‘Ideology and Ideological State Apparatuses’ – was hastily published in the French journal La Pensée, with the translation into English following a year later, in 1971. The focus of this essay was the attempt to develop a theory of ideology, and its role in the reproduction of capitalist social formations, as part of a broader contribution to a Marxist theory of the state. Much of the response to this article has been in terms of its reduction of subjectivity to nothing more than an ideological effect with the apparent consequence that revolutionary political action is precluded by a lack of any revolutionary subject. To some extent such debates were hampered by the knowledge that the available text was little more than an assemblage of elements taken from a larger, more complete, work. This relation between the fragmentary article and the complete work may, for many, spark the initial interest in the appearance of On the Reproduction of Capitalism. So we should start by saying that any hope of resolving the questions and difficulties of the original article by appealing to the full text to ‘fill in the blanks’ is to a great extent misguided and will only lead to further disappointment. This is, in part, due to the ‘complete work’ itself being only a manuscript – to which Althusser gave the title ‘The Reproduction of the Relations of Production’ – of the first of two projected volumes, the second not having been composed. Nevertheless, the inclusion in this volume of additional material written by Althusser to clarify his argument in response to criticism of his article, particularly the charge of functionalism against his view of the state, as well as the original article itself, certainly throws new light on certain of its claims. But we shall see that much more is to be gained by turning to the fuller manuscript itself.

The main text of On the Reproduction of Capitalism may uncharitably be described as yet another of Althusser’s abortive attempts to refound historical materialism. Of course the specificity of this attempt is in its centring on the role of ideology in producing submissive subjects who, without the need for direct repression, that is, violence, will continue to go to work, to buy commodities, to be exploited. There is one constant in all of these attempts, and that is the claim that historical materialism, as the science of history, can only be understood through a working out of dialectical materialism as its philosophical counterpart. This explains the reason that a text on the nature of reproduction in capitalist social formations is opened with the question what is philosophy? The weight of this question is therefore that its answer needs to provide the revolutionary theory, that Althusser following Lenin, claims is necessary for revolutionary practice. However, we will not get an answer from reading On the Reproduction of Capitalism since this was to be addressed in the second, unwritten, volume. Nevertheless, it is the ‘long detour’ (7) that this question necessitates, that constitutes the text of the manuscript, and as is so often the case with Althusser, it is in the ‘detour’ that the real interest lies.

To understand the focus on ideology in this particular reworking of dialectical materialism we must consider the political and historical context of Althusser’s writing. We refer, in the first instance, to the upheavals of May ‘68 in Paris, not forgetting the broader international background offered by the ongoing imperialist war waged by the USA against Vietnam, and the travails of Maoism in China. It is the former European events that Althusser describes as a ‘dress rehearsal’ (206) in a sequence that he had the confidence to declare would bring about the end of capitalist exploitation in a truly social revolution. The ‘revolt’ by students across French universities sparked both the need to think, in general, the suitability of more traditional political strategies, such as those of the French Communist Part (PCF), and, in particular, about education as the site of political struggle. For Althusser and his colleagues, such as Étienne Balibar, who contributes an introduction to On the Reproduction of Capitalism, the school system therefore became the object of critique for which Althusser took responsibility for the composition of a theoretical grounding. One senses part of the reason for this (and this undoubtedly, as Balibar notes, created a large amount of tension within the group), was that Althusser, in his continued commitment to the PCF, wished in some way to think the compatibility of the student revolt with the more traditional notion of the historic class struggle led by workers and a workers’ party. This comes through in the text most clearly when Althusser recounts that, to put the events of May ‘68 in proper perspective, we had to adopt ‘the standpoint of reproduction, which is the standpoint of the class struggle as an overall process … and as a historical process’ (220). Here Althusser is appealing to the dual temporality of political and economic struggle, with political explosions being only the short term, rather noisy, counterpart to the ‘silent, obscure, interminable, bloody trench warfare’ (128) of the economic class struggle. Althusser maintains a rather classical emphasis on the economic struggle as being the determinate factor, in the last instance, as it were.

This emphasis on the economic class struggle is also maintained in Althusser’s extended discussion of the nature of revolutionary change. Of particular note is the discussion of law, which was not included at all in the Pensée article, and the necessity of viewing revolutionary transformation beyond changes of legalistic categories, such as ownership (of the means of production). This is because, as Althusser puts it, ‘all law is by essence, in the last instance, inegalitarian and bourgeois’ (61). The implication is that genuine social transformation, required to overcome capitalist exploitation, is not possible through changes in bourgeois constitutionality. Althusser compliments the Marxist conception of the withering away of the state with the withering away of law itself. This entwinement of law and state as the targets of revolution is further extended by the claim that ‘The number-one question when it comes to the state is the question of the possession of state power’ (92). This follows from the thesis that state power is realised in the state apparatuses, bother repressive and ideological, and that it is this feature of state power that ensures the reproduction of capitalist relations of production. To seize state power is therefore to smash the state apparatuses, with the proviso that it is of no use making changes to the ideological state apparatuses without dismantling the repressive state apparatus. The lesson, then, of May ‘68 is that the ideological state apparatuses are ‘both the site and the stake of a class struggle’ (220) that is a reflection of the antagonism at the heart of capitalist social formations.

The desire to think through the new forms of political action without jettisoning the framework of a workers’ part completely, as well as the very insistence on the already noted theoretical bifurcation of Marxism into historical and dialectical materialism, not to mention some of his more choice remarks, has often left Althusser open to the charge of being a (philosophical) Stalinist. On the Reproduction of Capitalism is notable then in providing an explicit critique of Stalinist politics, which, in brief, is that it incorrectly focuses on the productive forces and ignores the problem of the relations of production and how to stop their reproduction in and as exploitation. In this way ‘Stalin fell short of Lenin’s politics’ (215) and it remains a crucial task, according to Althusser, to elaborate the theoretical contours of this political misstep. In the present academic context in which we are seeing a number of works re-engaging with Althusser’s thought in a way that, given the demise of the Soviet Union, is less impeded by debates over Stalinism, this addition is most welcome and will hopefully allow a more considered approach to Althusser’s less explicit, but for that no less insightful, critiques of Stalinism which are worked out in a more philosophical register in his other works.

If the detailing of this contribution to a debate over Stalinism, and de-Stalinisation, feels a bit too anachronistic, we may be further tempted to say that ‘lateness’ is possibly the characteristic trait of the publication of On the Reproduction of Capitalism more generally. In theoretical terms, debates over the functioning of ideology have been advanced by those, like Balibar and Slavoj Žižek, whose work has been directly inspired by that of Althusser but has in important respects, and for better or worse, moved beyond it. It is therefore unclear what further contribution Althusser’s work can make to this field. There is also another sense in which the publication of this manuscript has arrived late. The irruption of protest that met the UK coalition Government’s increase in the fees for university education in 2010 may be seen to have certain parallels with the protests in the Paris of May ‘68. Again we had the same questions of why, although on a smaller scale, protests were led by students and not workers, and what this would mean for traditional avenues of protest such as trade unions. But what On the Reproduction of Capitalism does offer is a refocussing on the question of state power. While Althusser notes that we have ‘the real commencement of a Marxist theory of the state’ (71) with the work of Marx and Lenin, the question is whether, today, we require a recommencement of the critique of the state. On the Reproduction of Capitalism is as timely a reminder as any of this project given that questions of state power have been widely debated but remain theoretically opaque. It also provides a valuable introduction to some of the work already completed while laying out important markers that may still be of great value to those wishing to add further footsteps in this long march.