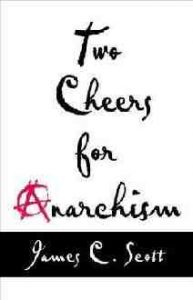 In Two Cheers for Anarchism, political scientist/anthropologist James Scott makes the case for the ‘anarchist squint,’ which is less a theory and more a way of looking at the world. ‘What I aim to show is that if you put on anarchist glasses and look at the history of popular movements, revolutions, ordinary politics, and the state from that angle, certain insights will appear that are obscured from almost any other angle’ (xii). I make no claims to being a master anarchist squinter, but I cannot deny that since I first picked up Scott’s book, everyday life has provided me with many examples illustrating the strengths—and weaknesses—of Scott’s book.

A few months ago, for example, I encountered a news story about a Dublin grandfather who gave his grandson a voucher from the entertainment store HMV as a Christmas gift. When grandfather and grandson went to redeem the voucher, the company (which was in the midst of financial collapse) refused to honor it. The outraged grandfather took three computer games off the store’s shelf—roughly equivalent in value to the voucher—and walked out of the store with them. Store security followed him, but no arrest was made (arresting the grandfather would hardly have improved the company’s already-tarnished public image), and HMV subsequently decided to honor such vouchers again (‘Irish Grandfather Defies HMV Voucher Policy’).

This incident seems to bear out well a disturbing and yet undeniable point made by Scott. Liberal political institutions were supposed to generate channels for correcting injustices and enabling positive social change. Those institutions were meant to ensure that if ordinary people had grievances, they could find a way ‘within the rules’ to get them addressed. But things haven’t quite turned out that way, even in more-or-less well-functioning democracies.

It is a cruel irony that this great promise of democracy is rarely realized in practice. Most of the great political reforms of the nineteenth and twentieth centuries have been accompanied by massive episodes of civil disobedience, riot, lawbreaking, the disruption of public order, and, at the limit, civil war. Such tumult not only accompanied dramatic political changes but was often absolutely instrumental in bringing them about (16-17).

‘We are obliged,’ Scott concludes, ‘to confront the paradox of the contribution of lawbreaking and disruption to democratic political change’ (Scott’s emphasis, 17). Sometimes, this involves social movements or large-scale rioting, but quite often it requires ‘what was once called “Irish democracy,” the silent, dogged resistance, withdrawal, and truculence of millions of ordinary people’ (14). Without the Irish granddads of the world, and the brand of ‘democracy’ they practice, liberal democracies would not function nearly as well as they do.

This may sound obvious, but it poses a stark challenge to liberal political theorists, who would very much like to see liberal institutions more or less do their thing without social disruptions of this sort. It’s clear, for example, that John Rawls wants civil disobedience to be a rare exception to the rule in a ‘nearly just’ political order. But the creation of such an order still remains a work in progress, to put it mildly, assuming it can be achieved at all.

Thus, the anarchist squint can make visible some very important facts about how the world works. But that squint, as employed by Scott, has its limits. Consider, for example, another recent news story. Four British tourists paid a recent visit to Rome. While there, they stopped off for a snack at the Antica Roma, an ice cream parlor and bar near the city’s Spanish Steps. Four ice cream cones—for takeaway, I might add—cost the foursome 64 euros (‘British Tourists Angry At £54 Ice Cream Bill’).

There’s nothing exceptional about this story. It demonstrates a well-documented, time-honored social practice around the world: one set of prices for the locals, another for the foreigners. I mention it only because Scott fulsomely praises the way that ‘most villages and neighborhoods function precisely because of the informal, transient networks of coordination that do not require formal organization, let alone hierarchy’ (xxi). But informal local norms of neighborliness only function consistently among neighbors. Foreigners that enter into such ‘informal, transient networks of coordination’ are routinely regarded either as ‘fresh meat’ to be exploited or as enemies to be driven out. If you want any sort of impartiality—clear rules applied consistently to locals and newcomers alike—you need a formal organization with the power to make and enforce official rules. In short, you need a state. (This is not to say, of course, that the presence of a state is sufficient to produce impartiality, only that its presence seems to be necessary.)

In principle, Scott agrees. Scott may squint like an anarchist, but he does not regard himself as one. While he occasionally expresses regret that the state’s elimination is probably impossible, more typically he denies any desire to get rid of the state. His denial is worth quoting at length:

Unlike many anarchist thinkers, I do not believe that the state is everywhere and always the enemy of freedom. Americans need only recall the scene of the federalized National Guard leading black children to school through a menacing crowd of angry whites in Little Rock, Arkansas, in 1957 to realize that the state can, in some circumstances, play an emancipatory role.

Nor do I believe that the state is the only institution that endangers freedom. To assert so would be to ignore a long and deep history of pre-state slavery, property in women, warfare, and bondage. It is one thing to disagree utterly with Hobbes about the nature of society before the existence of the state (nasty, brutish, and short) and another to believe that ‘the state of nature’ was an unbroken landscape of communal property, cooperation, and peace (Scott’s emphasis, xiii-xiv).

Scott’s admission here is quite measured and sensible. But this admission suggests that there are some things that states do very well, and other things that they do very poorly. There are advantages and disadvantages to reliance upon decentralized informal norms. There are times to cheer acts of disobedience and times to wish for their prompt suppression. (Consider the National Rifle Association’s openly expressed desire to defy any stricter gun control measures the U.S. manages to enact.) The problem, then, is to figure out just what states should and should not do, and what ought to be done when they do otherwise.

In principle, Scott is ideally suited to perform this task. For decades, he has studied both the ways that states go wrong and the tactics people employ to resist states when they do go wrong. Scott’s book Seeing like a State: How Certain Schemes to Improve the Human Condition Have Failed (1999) tackles the former topic, while works like his Domination and the Arts of Resistance: Hidden Transcripts (1992) deal with the latter. But Scott fails to take up this challenge, either in Two Cheers for Anarchism or anywhere else to the best of my knowledge. He seems loathe to say more good things about states than absolutely necessary. When he admits that states get something right (as with Social Security in the United States), he does so like a six-year-old conceding that the Brussels sprouts he just ate have, contrary to his predictions, failed to kill him. But as a result, Scott is left unable to offer any systematic advice regarding what states should and shouldn’t do. Even worse, he praises resistance to states when they go badly wrong with minimal acknowledgment that informal social practices often merit exactly the same resistance. Scott may have two cheers for anarchism, but he cannot bring himself to offer even one cheer for states.

Consider, for example, Scott’s case for jaywalking as a form of ‘anarchist calisthenics’. He came up with the idea while visiting Germany, where he encountered the very German reluctance to cross the street against the light. ‘You know,’ he imagines himself saying to a hypothetical German,

You and especially your grandparents could have used more of a spirit of lawbreaking. One day you will be called on to break a big law in the name of justice and rationality. Everything will depend on it. You have to be ready. How are you going to prepare for that day when it really matters? You have to stay ‘in shape’ so that when the big day comes you will be ready. What you need is ‘anarchist calisthenics.’ Every day or so break some trivial law that makes no sense, even if it’s only jaywalking. Use your own head to judge whether a law is just or reasonable. That way, you’ll keep trim; and when the big day comes, you’ll be ready (4-5).

Useful advice, to be sure, but it has nothing to do with states, as far as I can tell. State authority is almost never effective by itself at preventing jaywalking. Where jaywalking is rare or non-existent, as in Germany, it is almost always due to exactly the kind of informal norms that Scott fulsomely praises. Indeed, Scott admits that his own reluctance to jaywalk in Germany is due to the ‘chorus of scolding tongues and fingers wagging in disapproval,’ not due to any fear of being ticketed by the police (4). In short, Scott’s anarchist calisthenics are just as easily directed against non-state social norms as they are against the heavy hand of the state. Scott’s intense dislike of the state prevents him from admitting this simple fact.

Scott usefully exposes the failure of liberal institutions to deliver, within established institutional channels, on many of the promises they have made. But his focus upon this failure leads him into an uncritical condemnation of states, and an equally uncritical valorisation of anti-state activity. I’d definitely recommend you try an anarchist squint once in a while, but if you never open your eyes any wider than that, you will be blind to a great many things.