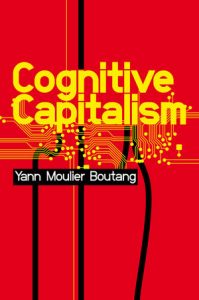 Paula Cerni MPhil is an independent writer. For a list of publications, please visit …

Capitalism always transforms itself, or, as Yann Moulier Boutang says in this book, is ‘forced to mutate in order to survive’ (36). In that case, through what kind of capitalism are we now living?

Moulier Boutang’s answer, developed with colleagues at the University of Paris I, is ‘cognitive capitalism’. Related to ‘the knowledge economy’, ‘the network society’, ‘the information society’, and other similar notions, as he explains in chapter 2 it nevertheless differs from them. Politically and theoretically, it is closest to André Gorz, to Italian operaismo, and, especially, to Hardt and Negri. (Moulier Boutang is the founder of the French journal Multitudes.)

As a concept, ‘cognitive capitalism’ is a ‘work in progress’ (9), but it makes colossal claims. It posits a ‘third type of capitalism’ (9), a ‘new great transformation’ (136), and a ‘total paradigm shift’ (48), involving even ‘the parameters of space and time being radically altered’ (48). Unlike the putative first (mercantile) and second (industrial) types, this third one, introduced around 1975, is a ‘mode of accumulation in which the object of accumulation consists mainly of knowledge, which becomes the basic source of value’ (57). And it has been made possible by ‘the new information technologies, of which the digital, the computer and the Internet are emblematic in the same way in which the coal mine, the steam engine, the loom and the railroad were emblematic of industrial capitalism’ (57).

What then follows, according to the author, is that knowledge and other intangibles are part of the ‘real’ economy – a kind of invisible ‘dark matter’ (43) that could even balance America’s deficits away.

Alas, this argument might have seemed more plausible when the book’s first French edition was published in 2007, at the peak of the boom. With the bubble burst, however, a post-materialist economics of the kind Moulier Boutang promotes is harder to float. Now he worries that the depression will be blamed not only on the knowledge industries, but on the immaterial economy as a whole, and hence he warns against the ‘deceptively attractive idea that finance is a simulacrum and that what is needed is a return to the true economy (“real”, “productive”) rather than to “fictive” capitals’ (181).

At any stage of the business cycle, however, the thesis of cognitive capitalism would be problematic. For it runs against the classical differentiation between economic wealth on the one hand, and entities of a more subjective and immaterial kind on the other. According to some Marxist interpretations, for example, economic wealth is always objective and physical, the product of labour understood in the strictest sense of the word – labour applied to natural materials, labour that appropriates and transforms those materials into physical objects. Human knowledge, in that case, is relevant for the process in so far as it incorporates itself into it in the form of specific skills, techniques, machinery, etc.

But in recent decades, as the economy has moved increasingly away from traditional industries, many Marxists have come to accept the view that knowledge products – independently of any material carriers – represent wealth and may have value. In this book, Moulier Boutang develops that view all the way to its logical conclusion. And therein lies its usefulness.

Unfortunately, though, the author never seriously considers the obvious alternative case, which says that the recent growth of the knowledge industries, of finance and retail, and of the immaterial or service sector in general, represents an expansion of the unproductive or non-productive spheres of the economy, which continue to interact in complex ways with a productive core.

But let’s return to the deeper, theoretical trouble with Moulier Boutang’s argument. As we are about to see, his metaphor of pollination – loosely inspired by the work of economist James Meade, and representing all the immaterial activities that produce the new kind of value available under the supposed ‘third type’ of capitalism – blurs the boundaries between the effects and conditions of the processes of wealth creation, on the one hand, and the processes themselves on the other. In effect, it inflates those processes to occupy just about everything.

According to Moulier Boutang’s pollination metaphor, classical political economy values only the material product of labour – metaphorically, the honey. But, he objects, bees also pollinate flowers; therefore, economics is wrong to attribute to the bees only the value of the honey. Stated in these terms, this would be a straw man argument, since traditional economics just as happily counts as wealth-creating human labour that produces fruit as human labour that produces honey.

But what Moulier Boutang is getting at is something else. ‘Pollination’ for him includes many activities economists consider as ‘externalities’. Now, it’s true that all wealth creation – all social life – presupposes knowledge, just as it presupposes a million other things. However, if we start allocating a value to all of these conditions, to all the externalities, we will inevitably conclude that the universe contains, and constantly produces, value through an infinity of sources and determinants.

Indeed, for Moulier Boutang, not only human cognition, but non-human nature too creates value. ‘A large part of the value crystallised in the goods produced by human labour actually comes from the “work” (in the sense of transformation of energy into matter) of the biosphere’ (19), he writes, mentioning as an example photosynthesis going into fossil fuels.

We might then ask why the capitalists of the first and second stages didn’t think to ‘valorise’ knowledge and nature, or, for that matter, unemployment – for Moulier Boutang believes that even the unemployed person ‘has a rich and pollinating life’ and ‘is directly producing wealth’ (165).

Moreover, how should we measure this ‘third’ type of value? Can it even be measured, since the number of externalities is virtually infinite? Moulier Boutang wants it both ways. He asserts that ‘the sphere of pollination, if one gives it a market value (which is a futile exercise in a way, because pollination is priceless in the sense that it has an infinite value) is between 350 and 1,000 times the economic value of the honey produced.’ These figures, he tells us, are only ‘a first approximation’, somehow inspired by the ‘recent syndrome of the collapse of bee swarms, starting in 2006, plus the introduction of African bees into the Americas, plus the intensive use of pesticides’ – phenomena he does not attempt to quantify, let alone relate, either quantitatively or qualitatively, to the process of value production. Nevertheless, he says, the ‘result is clear’ (186).

A more sensible approach would be to acknowledge all effects and conditions of the process of wealth creation, yet demarcate them from the process itself. To be sure, capitalists benefit from such things as the growing store of human knowledge, the planet’s natural resources, and the force of gravity – just as every ruling class in history has done. But the production of wealth (or, under capitalism, value) is a very specific, relatively delimited type of human and material relation.

Of course, drawing lines between productive and unproductive activities, or, more generally, between the economic and the non-economic, is a central and long-standing problem in political economy. In the same way, drawing lines between the internal and the external – while nevertheless taking account of the connection between the two – is an ontological and methodological problem that every science, and also philosophy, has to face. The ‘imperialistic’ case that everything falls under the realm of economics, or of production, or of consumption, or of physics, cannot be easily accepted – if nothing else, because once we accept it for any one of these things we are obliged to do so for many of the others.

Lines, therefore, must be drawn – not absolutely, but relatively to the issue or question at hand. Taking real honey bees as an example, sunshine, air, flowers, etc., are all necessary to the functioning of the beehive, while, in turn, bees help sustain other plant and animal species. But if we wish to understand the division of labour within the hive, we need a different level of analysis. We need to know that only worker bees – not queens or drones, however useful their roles – collect pollen and nectar, make honey, wax, and royal jelly.

Similarly, in economic life, as Marx already observed, the labour of the slave-master is essential to the running of a slave economy; or, the labour of the thief ‘produces’ law books, locks, and keys. But do these two labours create wealth? Economics – already labeled by some the ‘dismal science’ – would be unwise to head all the way down this particular rabbit hole.

Moulier Boutang’s own practical demands show how his argument has already reduced itself to the absurd. One demand consists in a proposal to change accounting standards so that the value produced by ‘pollination’ is recognized. But what exactly would be gained by this? Unless, of course, changing accounting rules is a ‘pollinating’ activity in its own right. Well, creative accounting as a method for wealth production has already been tried and tested – and the result has usually been that no amount of buzz can make up for the lack of honey.

More audaciously, Moulier Boutang (along with others) demands a guaranteed income for all. This would be ‘individual, unconditional, cumulative, and set at a level sufficiently high for people to be able to afford to live’ (156). Logically enough, if ‘life itself in society’ (151) directly produces wealth, we should all be paid just to be kept alive. But no society, capitalist or otherwise, could survive on that basis. And it has to be a sign of the desperate state of left-wing politics that such a scheme is being seriously considered.

Despite these major flaws, the thesis of ‘cognitive capitalism’ does draw much-needed attention to some recent social and economic trends. Notably, the growing role of immaterial labour and of new information and communication technologies raises questions that the left, confused and divided over value theory, has not been able to answer fully. Should this book manage to re-kindle a debate on those questions, it will have done its own modest job of (intellectual) pollination. It will then be up to the rest of us to make sure the fruits are truly worthwhile.