Marx & Philosophy Review of BooksReviews‘Pessimism of the Intellect, Optimism of the Will: The Political Philosophy of Kai Nielsen’ reviewed by Sheldon Richmond 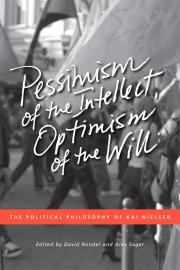 The editors of this selection of mostly recent essays by Kai Nielsen on his Wittgensteinian meta-philosophy and Marxian social and political philosophy have neatly packaged this book. The editors wrapped the essays into three discrete sections. Those interested mainly in Wittgensteinian meta-philosophy can read the first section. Those interested mainly in Marxian social philosophy can read the second section on social egalitarianism. Those interested mainly in Marxian political philosophy can read the third section on nationalism, liberal democracy, and world government. Nielsen’s approach to Wittgenstein is apparently doctrinaire, but his approach to Marx is largely revisionist and critical. Nielsen’s evolutionary approach to Marx leads him to his use of the term “Marxian” to describe his stance in social and political theory.

There is a novel aspect to Nielsen’s use of Wittgenstein that makes it less doctrinaire to Wittgenstein than will be apparent to the casual reader. Nielsen develops an epistemology despite his aversion to traditional philosophical theories and problems. Nielsen calls his epistemology “Wide Reflective Equilibrium” (or “WRE” for short). Basically, his epistemology is a fallibilist approach to the very traditional philosophical question—how do we know when our beliefs are justified? The traditional approach was to find an external or absolute point of reference, sometimes referred to as an “Archimedean” standpoint. However, fallibilists reject absolute standpoints. So the problem of justification of belief for fallibilists becomes: if we don’t have an “Archimedean” standpoint from which to evaluate our beliefs, how can we rationally choose what to believe? Nielsen’s solution is his “Wide Reflective Equilibrium”: find as many alternative positions as you can, gather a wide base of relevant information, and then put your own preferred view into the mix, and see whether your own preferred view comes out as raw or, at least, somewhat well-cooked and digestible. Traditionally, such a view has been called “coherentist”. To be more accurate, “equilibrium” in Nielsen’s version of coherentism refers to a feedback system, where the new view or preferred view one introduces within the set of alternative viewpoints causes one to adjust one’s views so that one does not put the entire system into a state of “disequilibrium”. I find it interesting that Nielsen does not “reflectively” consider his epistemology by considering alternative approaches to WRE, such as critical rationalism. For critical rationalism, the tactic is also cybernetic—the use of a feedback system—but negative: reject one’s preferred view if it is internally contradicted. The question becomes not how to justify beliefs, but rather: how can we find out when we are wrong? I may be wrong, but I think the negative approach of critical rationalism is more thoroughly fallibilist than the justificationist approach of Nielsen’s WRE.

I want to highlight the agenda-setting type essay in this first meta-philosophy section. It hopes to set a broad agenda for those interested in the social, political, environmental and economic issues facing us with the trend towards globalization. Chapter 4, “The Global Crisis of Values: The Poverty of Moral Philosophy”, lists fourteen problems that in many respects provide the broad context for the reader to comprehend Nielsen’s thinking in the rest of the book. The point of the essay is to show how the past and current way of doing moral philosophy misses the most serious social and political problems facing humanity in an increasingly globalized world. What Nielsen suggests is that we use a broad approach that avoids philosophy, and that we employ a variety of disciplines and techniques.

Does Nielsen himself undertake an extra-philosophical approach to the problems of globalization in the remainder of the book?I leave that question to the reader: can one avoid philosophy altogether when attempting to deal with social and political problems? In the second section, Nielsen aims to solve the problem of economic justice: how can we achieve complete equality? However, he approaches this question mainly through a critical discussion of Rawls’ difference principle: the social conditions where the rich are richer is justified when having more leaves those worse off no more worse off than they would be when under different social conditions where the richer become less rich. I like Nielsen’s concise and user-friendly version of Rawls’ difference principle: “Economic inequalities are justified when they make the worse off people materially better off” (222). Nielsen is sympathetic to the “ideal theory” approach, and even to Rawls’ own sense of social equality, but not as sympathetic to how Rawls deals with inequality through Rawls’ difference principle. Nielsen argues in general that social equality is possible, but only under socialism. Here is where I think we come to the key point of the essays in this section: socialism is not an idealistic dream, nor is it historically inevitable, but it is required for the achievement of social equality—which also is required for complete and real liberty.

How then can socialism be achieved? Can it be achieved through piecemeal change using the traditional method of democratic reform, or is some form of violence required? Nielsen discusses this question of violence or piecemeal reform in his essay on Karl Popper (as the piecemeal reformer) and Herbert Marcuse, as an advocate of the discriminating use of violence for revolutionary social change. (See Chapter 5: “On the Choice between Reform and Revolution”.) Nielsen seems to agree largely with Popper that with sufficient reforms, the fundamentals of society can change; however, he comes down on the side of Marcuse, that in certain situations where reforms are resisted, some controlled and constrained violence will need to be used. One reply Popper could have made to Nielsen and Marcuse is that violence, like most human action, has unintended consequences: we may attempt to make what seems to be a positive change in our situation through the use of violence, but the change achieved by violence could result in countering our aims and goals through consequences never expected. I don’t know how Nielsen would reply, and I wish the editors in their interesting interview with Nielsen (in the “Afterword”), would have raised that question. (The editors’ introductory essay is not free of criticism of Nielsen, and is worth reading, but does not mention how Marx was keenly aware of the problem of unintended consequences—something Nielsen’s Marxian position may underplay—and how Marx saw unintended consequences as the chief problem of the social sciences: how to explain the unintended, such as how capitalism has unintended business cycles.)

The third and final group of essays is about political philosophy, and the problem of egalitarianism at the level of nationalities and among states. Again Nielsen uses an ideal theory approach to looking at the complex issues of nationalism within the context both of liberal democracy and the aim of establishing a world government (or at least a more democratic United Nations with powers to intervene in States). Nielsen is keenly aware of critics who think him naïve in expecting a world government in a world of territorial nationalism. His main defense is that we need ideal theory free of realistic considerations to set ideals for the critical discussion of current society. However, he does not consider Marx’s specific point that social theory can be rationally comprehended and tested only through attempts at institutionalization. Looking at social and political theories in the abstract can lead to mysticism and irrationalism, if not merely to incomprehensibility. (See Marx’s eighth Thesis on Feuerbach.) I am not saying that Nielsen needs to be less “Marxian” and more “Marxist”, but I am merely observing a lack of coherence within Nielsen’s own framework of seeking political and social justice through the implementation of a thorough-going egalitarianism in all institutions. Nielsen argues for social change towards egalitarianism within all institutions from local to global on largely an “ideal theory” of political justice without including the discussion of ideas of implementation. For instance, how do we implement egalitarianism within educational institutions from pre-school to graduate school? Should all those in an educational institution decide on the hiring and salaries of the teachers including the students, professors, administrators, and all employees of the educational institution? In short, what would it be like for egalitarianism to move from the realm of theory to the realm of practice within real-life institutions where real-life decisions are made that can unintentionally cause suffering?

Nielsen, in his keen advocacy of social and socialist egalitarianism, nationalism within liberal democratic states, and world government, does have a recognition of the dangers of ideology: “The other guy may well be caught up in an ideology but so unwittingly may we. Consciousness about these matters is hardly ever clear” (377). How can we break the spell of an unconsciously or “unwittingly” held ideology? Here is where we need epistemology—as well as cognitive science and neuroscience. I am not sure that Nielsen’s Wide Reflective Equilibrium is sufficiently thorough in its recognition of fallibility to handle the problem of entrapment by ideology. Generally, ideal theories are top-down and tend to ignore feedback from the bottom level data that conflicts with theories at the top. Moreover, WRE reinforces the top-down nature of ideal theories by neglecting feedback from theories and ideas at the bottom, real-life level of social life in practice. Hence, WRE and top-down ideal theories reinforce ideologies and close the doors of ideological traps. But ironically, the way out of the ideological trap may be through the use of Marx’s idea of testing theory through social practice: an idea that Nielsen’s Marxian approach underplays (at least in this selection of essays).