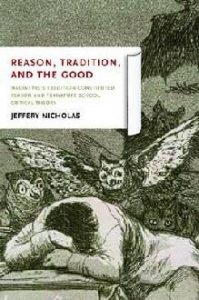 In this highly enjoyable book, Jeff Nicholas presents a defense of what he terms “substantive reason”, as a viable alternative to other possible accounts of reason. Throughout the book, Nicholas presents different accounts of reason, mainly from Frankfurt School theorists, to better understand how we can speak of reason and what it entails. His comparisons of Horkheimer and Adorno, Habermas, Taylor, and MacIntyre are both thorough and illuminating, and they serve to set the discussion in context. Nicholas argues that philosophical accounts of reason, especially over the past 200 years, have been insufficient for understanding the concept of reason in all its aspects. In his accounts of these seemingly dissimilar philosophers, Nicholas is able to bridge some very different philosophical worlds that do not usually come into contact with one another. Here, Nicholas brings these worlds together with such force and in such a concrete manner, that any reader who is used to dry, conservatively written works of philosophy ought to be jolted awake right away by both the style and substance.

The book opens with brief examples from pop culture, science, politics and society to illustrate how reason is often viewed in our contemporary setting. This is the point where the reader realizes s/he is in for quite the journey. Nicholas’ use of examples (“Be like Mike”, scientific research that takes no account of ethics, etc.) serves to show how we have very few commonly accepted parameters for what constitutes reason and reasonable choices in contemporary society. While some Thomistic philosophers might argue that we should return to “the good old days”, as if there were a time in human history where the majority of people agreed upon how to be rational, Nicholas chooses a path that, yes, is steeped in tradition, in a qualified sense, but it is a path that is not stagnant. Before I get to his solution, however, I must first explain the accounts of reason he highlights in the book.

Nicholas deals with Adorno and Horkheimer’s critique of reason early in the book. Their critique, according to both Nicholas and, as we shall see later, Habermas, is based primarily on their understanding of human consciousness. Humans make rational choices based primarily on subjective reason, but as soon as one makes a claim that she is following reason, there appears to be an objective element involved. Horkheimer and Adorno are unable to deal with the problem, however, and as we shall see, their account of reason does have its critics. Now, Horkheimer seeks, correctly in Nicholas’ opinion, an account of reason that assists us in judging ends; but, due to the fact that Horkheimer and Adorno’s account of reason in Dialectics of Enlightenment is firmly entrenched in a paradigm of consciousness, they are unable to provide an account that judges ends.

Jürgen Habermas’ critique of Horkheimer’s and Adorno’s account centers on viewing reason through a paradigm of consciousness. In place of their account, Habermas proposes an account of reason based on language. In Nicholas’ discussion of Habermas, he explains Habermas’ account of communicative rationality, but he also articulates Charles Taylor’s scathing critique of such an account. In highlighting Taylor’s criticism that Habermas’ account of reason is too formal, Nicholas draws the reader in by using an example from Plato. In the Republic, Plato justifies the fact that the guardians of the city lie to the citizens to preserve harmony within the city. This clearly flies in the face of what is rational, according to Nicholas, and so shows that a communicative rationality is insufficient for examining reason and the ends of particular actions. In the end, Habermas’ “solution”, while seemingly better than Adorno’s and Horkheimer’s, is still fundamentally flawed since there is no criterion for evaluating ends; it merely shifts reason away from a paradigm of consciousness, to one of intersubjectivity. It is here that Nicholas turns to MacIntyre for help in determining what Nicholas terms “resources for agents to judge ways of life as fulfilling or inimical to fulfillment” (82). One discovers such resources through an examination of competing traditions; this is what MacIntyre provides through his tradition-constituted reason.

Nicholas’ claim that both Horkheimer and MacIntyre share a number of similarities in their thought, specifically when dealing with an account of reason that can judge ends, is fascinating and quite helpful for those who want to interpret MacIntyre in light of a critical theory, yet this comparison alone is not enough to understand MacIntyre’s project. Nicholas’ view of MacIntyre’s project here is not that of Kelvin Knight’s “Revolutionary Aristotelianism”, where the study of practices is the most important aspect of his philosophical project. Rather, according to Nicholas, it is MacIntyre’s study of traditions that is the key to understanding this project, and because of this, Nicholas argues that MacIntyre is the best guide for any evaluation of competing accounts of reason. It is MacIntyre’s ability to assess different traditions that Nicholas argues is the tool to provide us with a way of evaluating reason itself.

In Nicholas’ account of what he terms “substantive reason”, we find the way in which he argues that we are able to identify reason within particular traditions. Because we have specific sets of beliefs, and these beliefs are colored by the traditions which we follow, it is of the utmost importance that we are able to evaluate traditions and the ordered goods, moralities, and cosmologies contained therein. To discuss these points, Nicholas uses the examples of the Roman Catholic, Lakota, and Zande traditions. He meticulously provides accounts of different details of each tradition through a method of critical enquiry, and so shows how we come to view a substantive account of reason. In the end, to be reasonable, one must be able to step outside the guidelines and limitations that society imposes, and evaluate an order of goods before one chooses what the best course of action will be in a given situation. Be a Socrates, a Francis, a Benedict (if we follow MacIntyre’s lead in After Virtue), a Marx, an Arendt, or any other historical figure who stepped outside the bounds of his or her society, and so realize what it truly means to be a rational animal.

Overall, Nicholas succeeds in articulating and defending an account of reason that deals with both objective and subjective reason. He calls on us to take up a Thomistic-Aristotelian critical theory of society so as to be able to support a substantive account of reason. The book as a whole is an intelligible account in a genre that can be highly technical, and for that, I must congratulate him. If you are looking for a “safe” read, a book that will not force you to question your own presuppositions, this is not the book for you. If, however, you are looking to be challenged and entertained, I suggest you pick up a copy of this dangerous tome and be prepared to change the way you think about reason, philosophy, and the world.