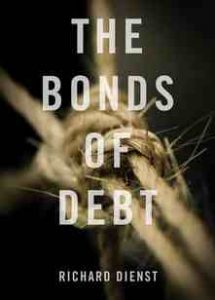 Richard Dienst
The Bonds of Debt

This is an extraordinary book illuminating the possibility of resolving the crisis of capitalism in favour of humanity. Employing a method grounded in critical theory, Dienst articulates the problem of the debt system in philosophical terms, demonstrating how debt operates across various social fields. Examining discourses on indebtedness, Dienst details how the neoliberal ‘regime of indebtedness’ (26) exploits, immiserates, and alienates workers and citizens. He contends that the present debt crisis can be explained as the accumulation of unserviceable obligations, but that it is also a crisis in the ‘forms of economic belonging, selfhood, responsibility, and mobilization that make indebtedness of any kind durable and binding’ (13). In order to push this social scepticism toward a politics of emancipation, Dienst underscores that any debt may become an ‘impossible demand that continues to control people’ (58); at the other extreme, however, debt may become an ‘empty command’ if workers and citizens refuse it (58). Thus, Dienst’s dialectical approach reconfigures the present state of despair into a rational account, providing readers with a ‘practical orientation’ (157) for establishing a collective system of solidarity.

In the first chapter, ‘Once in a Lifetime’, Dienst convincingly argues that this conjuncture is more significant than that of 1989, which solidified systemic tendencies already under way, and indeed more crucial even than 1968. Drawing on the Marxist works of Robert Brenner, David Harvey, and Giovanni Arrighi, Dienst presents a systematic account of how financialiszation has driven this epochal shift since the mid-to late-1970s, and how it is connected to the rise of neoconservative politics and neoliberal economics in the US and Europe. In the second chapter, entitled ‘Inequality, Poverty, Indebtedness’, Dienst explains that debt has allowed industrial corporations in advanced capitalist countries to support the economic stagnation of previous decades by boosting profitability in new mergers and acquisitions – up to the point at which the accumulation of corporate debt became unsustainable and required public bailouts at immense expense (61). Added to this were speculative bubbles created by financial capital itself. Simultaneously, a general but uneven increase in household and personal debt has boosted consumption in the West without activating the long-term growth and employment that could support such consumption (61). Further, public debt – as a ratio of GDP – has doubled in core capitalist countries since the 1980s. Finally, developing countries have been subjected to debt peonage, raising their export of capital to the North (62).

Dienst insightfully conceptualizes this overall formation, claiming that US-led neoliberal capitalism establishes a ‘regime of indebtedness’ (26). On one side, the regime is constituted by ‘enclosure’: that is, the privatisation of ‘all goods and resources that might once have been held in common’ (63). Enclosures include states’ bailouts of corporations at the expense of the public interest and the private appropriation of natural resources through mechanisms of debt peonage. On the other side, the regime is driven by ‘exposure’ (63): it exposes citizens to service financial obligations for former public provisions such as health, while also exposing workers to the limitless discipline of the market.

I argue Dienst contributes to a historical materialist understanding of the present because he examines the debt problem in the context of the totality of ideological practices in the North. In the second chapter, for example, Dienst contends that capitalist powers justify their global reproduction of misery by approaching poverty in localised terms – as though countries were poor due solely to their own intrinsic disadvantages (34) – and accordingly blaming the poor for failing to develop. Dienst also demonstrates that statistics such as national income per capita, the Gini index and the UN Human Development Index (HDI) mask the inequality capitalism produces within and across countries. These ideological forms are not the only disciplinary mechanisms by which the regime of indebtedness controls the population. In Chapter 3, ‘The Economic Consequences of the Perpetual Peace’, Dienst argues the regime is also grounded in the neo-imperialist military interventions of Northern states to safeguard the mobility of capital across the globe. These manoeuvres include neoliberal structural adjustments schemes that impose new and often unwieldy debts on so-called weak or failing states.

The never-ending war to expand markets is legitimated within the imaginary realm of the media, rather than in the symbolic space of political and legal institutions (88). While this distinction between the imaginary and the symbolic requires more in-depth explanation than Dienst provides, it is clear that the symbolic is based on consensual procedures for public discussion, while the imaginary applies to the media’s authoritarian insistence that the present-day societal status quo remain untouched. Dienst contends that the market and the media hold a ‘monopoly of actuality’ over states’ de jure monopoly of violence (2), as they justify actions in terms of a permanent ‘state of exception’ according to which humankind is obliged to fulfil capitalism’s opportunities for reproduction (31). The notion of opportunity is a fundamental ideologeme for capitalist powers to control their monopoly of actuality. Specifically, the media ‘perform constitutional functions in absentia’ (71). They allow the US to legitimate waging capitalist wars without being subject to legal processes, they establish a popular mandate absent formal democratic procedures, and they claim that the ‘values’ justifying US military interventions are universal solely because they are American (71, 84). Thus, the media present pre-emptive strikes as legitimate opportunities to expand US imperialism (86). In Chapter 4, ‘Letter to Bono’, Dienst extends this analysis by examining the role of spectacle in the politics of global poverty. Dienst points to the famous photograph of U2 lead singer Bono and US President George W. Bush walking across the White House lawn after a meeting on debt relief. According to Dienst, Bono believes his superstar status can persuade world leaders to address issues of global poverty. However, Dienst demonstrates that both debt relief and Bono’s morality regarding it are a fraud: the US foreign aid budget is miniscule, and debt relief’s aim is to expand capitalist circuits in poor countries (103).

Dienst then explains that the culture industry not only legitimates debts on the poor but also binds Northern consumers to debt. In Chapter 5, ‘Spaces of Indebtedness’, Dienst demonstrates that the architecture of shopping is a figurative representation of the regime of indebtedness. He investigates how the act of shopping produces enclosure that, like other technologies of societal control, includes a vector of movement. For Dienst, shopping offers ‘a way to bear being in debt, turning endless obligation into fleeting enjoyment’ (129). He analyses how Prada’s New York boutique imposes a bond of debt on the shopper, seducing the latter as both the ‘subject of luxury’ and the ‘subject of service’ (130). Dienst explains that ‘in exchange for an implicit promise to buy’, Prada will draw the consumer ‘into deeper intimacies’ (130), until the transaction assumes the fake appearance of an act of freedom. Prada’s seductions are also directed to ensnare the investment fantasies of financial capital.

In Chapter 6, ‘The Magic of Debt; or, Reading Marx Like a Child’, Dienst continues his innovative examination of debt by analyzing a text of Marx’s daughter Eleanor recounting her father’s tales of an indebted toymaker whose magic toys return home after being lost in the world to pay off his debts. Dienst contends that Marx’s ‘pedagogy of play’ reveals how capitalism cannot fully control the ‘playful magic of production’ – what Walter Benjamin terms the gift of producing and recognizing similarities (144). Through his mimetic talents, Marx’s toymaker takes possession of the world. Dienst argues that in this way Marx celebrates the labour of the toymaker, who communicates the wish that our world be animated by ‘a kind of restorative or redemptive playfulness’ (145). At the same time, Dienst contends such possibility can only be fulfilled if we recognize the historical debts we need to honour. He proposes that ‘the concept of indebtedness articulates the historicity of life’, that is, life insofar ‘as it is lived in common’ (147). In this sense, indebtedness refers to the ‘reciprocal bonds of productivity generated between people’ (30) that capitalism appropriates through the credit system. Thus, in the final chapter, ‘The Dialectic of Indebtedness’, Dienst claims that we must overthrow capital by repudiating any debt impeding us from truly living (156).

Dienst’s work thus clearly contributes to Marxist and post-Marxist discussions. With post-Marxism, Dienst seems to concede that previous terms for categorizing labour (proletariat, working class) are no longer practicable. Throughout the text, he claims that ‘we’ need to find ourselves, avoiding the use of classic Marxist categories to refer to the agent of change. On this question, while I believe identity categories are unavoidable if we aim to articulate a political resolution to our current impasses, I find the performative utopian effort of Dienst’s narrative useful in constituting the collectivity of labour. Further, Dienst details two strategies for turning the ‘unmet social needs’ of the apparatus of indebtedness into new political demands (176). The first is to realize a counterattack in financial regulation such as establishing microcredit schemes that would break with the profit-oriented mainstream-banking model. Such schemes should ensure the appropriate conditions to allow ‘associated workers’ to carry out ‘socially necessary labor’ (184). The second strategy – widely known as `Jubilee’ – is to struggle toward the total cancellation of debts.

In sum, by articulating a Marxist account of debt, Dienst insightfully contributes to imagining an economic formation that would guarantee equality, solidarity and freedom. In this way, his work fortifies the motivation behind current labour struggles and political protests.