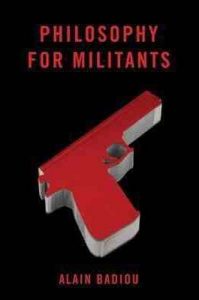 Badiou’s latest book is a translation of La relation énigmatique entre philosophie et politique, published in France in 2011, and collects three of his conference talks presented from 2005 to 2010. Also included are a foreword by translator Bruno Bosteels, an interview with Badiou on the 2012 student strike in Quebec, and a list of further suggested readings.

The ‘militant’ in the title suggests that those politically active in the current anticapitalist upsurge, the most significant in Europe and the U.S. since the 1970s, are one target audience for this edition. The list of suggested readings is primarily geared towards introducing Badiou, a key theoretician of the ‘communist idea’, to those unfamiliar with his thought.

The first chapter, a transcription of a 2010 talk in Paris, takes up the problem of ‘The Enigmatic Relationship between Philosophy and Politics’. There are two key questions in understanding this relationship: one, what is the fundamental purpose of philosophy; and two, how does philosophy operate vis-à-vis politics?

An event, for Badiou, is an eruption of genuine newness within a situation. He has argued elsewhere that it is a subject, properly speaking, which declares that an event has occurred within philosophy’s four determining conditions of science, love, art, or politics; gives that event a name; and practises fidelity to a truth procedure based on that event. Those procedures cannot be abstractly deduced from existing knowledge, or the ‘state of the situation’, and do not have identical parameters throughout the condition as a whole. Instead, those procedures are chosen by the subject, via its faithful militancy, and are specific to the event from which they arise within the condition.

Importantly, these are tasks of the subject, not of philosophy. Being dependent upon its conditions, philosophy works only after a declaration of an event and the beginning of fidelity to a truth procedure. Moreover, while having its own restrictions, philosophy still escapes any necessary restrictions on the subject: ‘philosophy comes very close to … political commitment, but without the constraint of a centralised organisation’ (8-9).

Badiou maintains that one role for philosophy is ‘the act of reorganising all theoretical and practical experiments by proposing a great new normative division’: for example, ‘Hegel introduc[ing] history and becoming into the absolute Idea, on the account of the striking novelty of the French Revolution’ (13, 15). Beginning from a new event within a given condition, these reorganisations occur in the realm of ideas and are not ultimately limited to any one or more conditions.

In his Foreword, Bosteels submits that, for Badiou, another specific role for philosophy is to coordinate truth procedures across the boundaries of science, love, art, and politics. Indeed, there are dialogues in the book between politics, centrally positioned, and other conditions: in the second chapter, devoted to the poetry of Gerard Manley Hopkins and Wallace Stevens; and in the third chapter, which discusses mathematician Paul Cohen’s set theory.

For Badiou, the period of neoliberalism from the 1970s until the past few years manifested no event within politics. A third purpose for philosophy during such a period is offered. Rather than resign itself to waiting and passivity, philosophy must instead attempt to discern whatever events may have occurred without nomination by a proper subject, or whatever events could ultimately come to pass in a particular situation. This proposal evokes the spectre of philosophy ‘in command’. Within politics, the declaration of the existence, and the naming, of an event that can reopen the communist project after a long hiatus is a strategic question and one that Badiou delegates, not to a subject, but to philosophy. Whatever the difficulties of the real democratic movements in Europe, the US, and the Middle East, this delegation seems problematic. The long night of philosophy’s waiting is coming to an end.

Such are the three purposes of philosophy. How, then, does it operate specifically vis-à-vis politics?

There are two aspects to philosophy. First, it is characterised by the ‘principle of the equality of intelligences’ (29). Philosophy is from anyone and for anyone; and is ‘completely indifferent to the social, cultural or religious position of the one who speaks or thinks’ (27). Second, however, this free address must be limited by the recognition that all opinions are not equal. The judgements of truth require the ‘acceptance of a common rule for discussion’; a recognition ‘of the validity of the arguments’; and, finally, an acceptance of ‘the existence of a universal logic’ (28). In these two aspects, democracy is a necessary, formal condition for philosophy.

Real democracy is also a difficulty for philosophy. Setting aside dominant understandings of the state, Badiou notes that real democracy is a type of ‘mass action … with large meetings, marches, riots, [and] insurrections’ (35).

Communism for Badiou is the unity of formal and real democracy: ‘a place where the rule of submission to a free protocol of argumentation, open to be debated by anyone, would have as its source the real existence of emancipatory politics’ (36). In communism, everyone can be a philosopher. Badiou then references historical instances of this unity, including nineteenth-century worker-philosophers, as described by Jacques Rancière, and Brecht’s proposed ‘Society of Friends of the Dialectic’ (37).

In this talk, Badiou provides no contemporary or historical examples of real democracy inhibiting the practice of formal democracy. What, then, are the unstated concerns that drive his prefigurative definition of communism? Badiou repudiates any narrow politics oriented around bodies and languages. His concerns are likely closer to his own communist politics, perhaps in the West’s longstanding, negative experience of Leninist parties that have limited free address from any one to any other; consistent application of chosen axioms; and rigorous carrying out of the consequences derived from those axioms.

The third chapter, ‘Politics as a Nonexpressive Dialectics’, is based on a 2005 talk in London.

Characteristic of twentieth-century revolutionary movements, ‘expressive dialectics’ are an ‘expression of general and fundamental contradictions’ (62). A politics of ‘nonexpressive dialectics’ is now necessary, separated from all opinions and knowledge that would have constituted a negation or contradiction in the expressive mode, and separated from existing desires constructible in the given, statist language. Badiou’s chosen paradigm for nonexpressive dialectics is the ‘generic’, based on Marx’s view of the proletariat and on the work of Paul Cohen; it is the search for nonconstructible and illegal desire, a new concept. This search must be based on the principle of a ‘despotism of equality’, not the expansion of capitalist inequality (76). This search is also for something more than any limited set of desires which could ultimately be given clear political names and fulfilled, thus bringing the paradigm of genericity to a close. Badiou calls for a new symbolic fiction which ‘permanently affirms the existence of that which has no name’ and will sustain the necessary militant fidelity to genericity itself (76).

The second chapter, ‘The Figure of the Soldier’, takes up this call and is based on a 2006 talk in Los Angeles.

Truths beyond all human and social determinations require within art the support of heroic figures. ‘Heroic’ means the infinite pursuit of a truth in human actions; ‘figures’ are ‘recognisable form[s]’ (42).

The revolutions of the preceding century were sustained, according to Badiou, by a paradigm in which ‘the site of heroism [was] war’ (45). The central figure was the ‘soldier’, from the French Revolution to the Cultural Revolution in China (46). The soldier has a democratic, collective aspect, related to mass action; is disciplined by a generic idea accessible to all, as in philosophy; and is anonymous, with no proper name. This inhuman figure is creative and in the service of the new: an ‘expression of human capacities, beyond risk, beyond death’ (51). Badiou contends, via readings of the poetry of Stevens and Hopkins, that this paradigm has ended.

Badiou does not limit his assessment of the twentieth century to simply the ‘”soldier of the revolution”’, but more broadly includes the figure of the soldier as manifested in capitalist states (49). This expansive definition is clear in his reference to the Arc de Triomphe’s perpetual flame commemorating France’s Unknown Soldier: ‘[s]uch is the democratic notion of glory … immortal with collective and anonymous courage’ (48). This artistic figure can, thus, be actively in the service of reaction or obscurantism, despite its ultimate instrumentality for revolution.

Even in limiting Badiou’s assessment to revolutionary politics specifically, the category of the ‘soldier’, and its implications for the heroic figure to come, remain troubling. Historically, the soldier has a strong relation to universal, forced conscription and hierarchical, one-to-many organisation, matters on which Badiou is silent. This was true in many ‘really-existing’ socialist states, and their defeat was, in the main, not inflicted on any battlefield.

Decades after the collapse of ‘really-existing’ socialism, a revolutionary must be able to deliberate politically, make informed decisions, and navigate new situations without a roadmap. This could not, and cannot, be accomplished by merely following orders. The figure of the soldier, and its implications for any future artistic symbolisation, conflict with contemporary demands and with Badiou’s admirable commitment, stated in the first chapter, to the unity of communism and philosophy, and the free address, from anyone and to anyone, without regard to statist position.

In accessible language, and absent Badiou’s notorious and forbidding mathematical formalism, this book usefully restates some of the primary concepts of his masterworks such as Being and Event. It also attempts certain dubious revisions and applications regarding the subject, philosophy, and the event, together with the soldier in art. Badiou’s theories will be put to the test by the advancement of the real political situation on the ground.