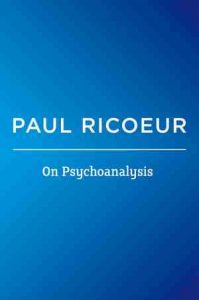 Amy E Wendling is Professor and Chair of Philosophy at Creighton University in Omaha, NE …

Designed to be the first of several volumes that will emerge from the Ricoeur archive in Paris in upcoming years, this collection follows up on themes explored in Ricoeur’s major work Freud and Philosophy: An Essay on Interpretation (French edition 1965). With the exception of one very early text that originally dates from a 1962 lecture, all of the articles and lectures included in the volume were written in the aftermath of Freud and Philosophy and in the context of the debates that surrounded it, with a concentration of texts from the later 1970s and middle 1980s.

The volume may be of interest to those who study Marxism and philosophy, and for two reasons. First, the volume addresses some interpretive paradigms that shape nineteenth century German language philosophy—especially Freud’s insistence that his work was science, his reaction to positivism, and his reliance on metaphors of energy transfer—paradigms that are equally important for understanding Marx. Second, in the volume, Ricoeur claims that psychoanalysis and the critique of ideology share a crucial goal: the liberation of the human subject. Before turning to other features of the volume, let us explore these two reasons, the relationship between them, and their limitations.

Some of the basic paradigms that shape nineteenth century German language philosophy include a notion of science—or Wissenschaft—that is very different from both the empiricism and positivism that have permeated the Anglophone notion of science. Marx, like Freud, claims that his work is science. However, when he says this, he does not mean that he has embraced an empiricist epistemology, nor has he adopted what he calls, in an 1866 letter to Engels, Comte’s “Scheiße Positivismus.”

The first two essays in Ricoeur’s book examine the particular epistemology that characterizes Freud’s work. Ricoeur stresses the perceived failures of the psychoanalytic standard of proof, and he ties these perceived failures to the particular type of “fact” that psychoanalysis tries to explore: namely, one that is not subject to direct observation. Here, as Vincio Busacchi observes in the essay at the end of the volume, “a new shift is produced in relation to the position [Ricoeur] upheld in Freud and Philosophy: The double aspect of psychoanalytic epistemology [one divided between an ‘energetics’ and a ‘hermeneutics’], previously interpreted as a problematic feature of Freudianism and a sign of its fragility, is now raised to the level of an exemplary attempt to elaborate a new epistemological concept” (226).

As Ricoeur points out in the volume, Freud’s use of energetic metaphors to describe the psyche explicitly rely on capitalist metaphors: for example, when Freud describes cathexis using the metaphor of a capitalist investing money (26). But some of the limitations of this energetic model are both explained and overcome by Freud’s work once it is not limited to his metapsychology, but broadened to include, especially, the case studies that Ricoeur highlights at numerous points in the volume, and also the cultural works. In the end, Freud’s epistemology transpires in a kind of back and forth between a reductionist energetic model of the psyche and the observations about patients, and culture, that supply the tools to explain how such a model came to be.

These observations are equally helpful in illuminating the perceived epistemic failures of the Marxian analysis. What seems to be a similar reductionist energetic paradigm can also be observed in Marx’s work. For example, Marx describes human, animal, and machine forces as indifferent apart from the varying quanta of energy they express; he also describes capitalism as an engine destined to blow up, no matter what the efforts of human agency to abate or hasten this. However, this sort of observation in Marx is always bracketed by a hermeneutic consideration: it is only concepts that have themselves been shaped by capitalism that allow us to see it as operating in ways that cancel the distinction and efficacy of human agency.

In Freud’s case, the facts of the unconscious are simply not available to direct observation, but must be passed through the mediations of the analysand, the analyst, language, and culture. In Marx’s case, the truth of capital is also not available to a direct observation possessed only of a vocabulary that tells me that I am free to sell my labor, that abstract time is the measure of value, and that amassing private property is essential to the notion of a self. The truth of capital must pass through the mediations of the critic who works to explain how such concepts become powerful precisely because they cover up the injustices that workers experience. The facts of freedom, of labor, of value, and of private property, in particular, must be historicized and upset. The critic also works to make concepts available that can describe, with some precision, the injustices of these bourgeois facts: concepts such as those of alienation, surplus-value, false-consciousness, and ideology.

Aware of these resonances between Freud and Marx, in On Psychoanalysis, Ricoeur draws some explicit parallels between the work of psychoanalysis and the critique of ideology, since both need this kind of meta-epistemology in order to effect an emancipation of the subject (32). Ricoeur revisits this theme numerous times in sets of remarks, some of which reference Habermas’ early work, Knowledge and Human Interests (202 i.a.), which are scattered among the various essays. These remarks are well summarized by a passage in the first essay, where Ricoeur writes:

The disturbances that give rise to psychoanalytic intervention are then considered as the pathology of our linguistic competence and are placed on the same level as the distortions uncovered, on another level, by the Marxist and post-Marxist critique of ideologies. Psychoanalysis and the critique of ideologies, in effect, share a common obligation, namely, to explain and interpret these distortions, which are not accidental, but systematic in the sense that they are systematically organized in the text of interhuman communication. These distortions are the occasion for a subject’s self-misunderstanding. This is why, in order to account for this, we need a theory that is not limited to restoring the original, unmutilated, and unfalsified text, but one that takes as its object the very mechanisms responsible for distorting the text. (30)

This recuperation of the Freudian epistemology will thus also enable Ricoeur’s defense of Freud against the criticisms of the left-influenced anti-psychiatry movement, which regards psychoanalysis as a regressive tool to help patients adapt to and accept the demands of a malformed and unjust society, or what Ricoeur calls “the established disorder” (38; 143).

A number of other issues of interest to left theorists come up, at various points, throughout the volume, including discussions of “bourgeois justifications” within Freud (144); false consciousness (147-8); and comparisons between Marx, Nietzsche, and Freud, the three figures that are Ricoeur’s famed “masters of suspicion” (148; 212). However, for the reader primarily interested in the import of the work for left theory, one limitation of the volume is that these remarks are neither organized into a single essay, nor do they form a sustained topic of reflection for Ricoeur.

Some additional aspects of the volume deserve notice. An essay entitled The Self in Psychoanalysis and in Phenomenological Philosophy begins as a technical discussion of the work of Heinz Kohut, but it ends as a meditation on the competing accounts of intersubjectivity that we find in Hegel, Husserl, and Lévinas. Here Ricoeur’s remarks go well beyond the phenomenon of transference that he is investigating. He offers interesting interpretations of each thinker, and he gives a trenchant assessment of the differences between their varying accounts of intersubjectivity.

Throughout the volume, Ricoeur pays some debts: to Lacan, in particular, in his analyses of language, linguistics, and semiotics, but also in his analyses of the role that fantasy can play in concealing reality (205). In addition, Ricoeur mentions some of the figures who must have been a part of his reading during the composition of the essays, and these are very diverse: not only do Habermas and Lacan appear, so do Chomsky, Gadamer, Kuhn, and Koselleck.

The volume is beautifully and rigorously translated by David Pellauer of DePaul University, who has translated many other works by Ricoeur. Since many of the essays repeat the content of other essays—a repetition that is sometimes but not always marked by the editors—the work of translation must have been unusually complicated. For example, a large portion of the second essay, Psychoanalysis and Hermeneutics, is a rewritten version of the first essay, The Question of Proof in Freud’s Psychoanalytic Writings. Pellauer has managed to capture, in English, the subtle differences between the two versions, and these will be of interest not only to Ricoeur specialists, but also to anyone trying to follow the complexity of his argument and its development. Themes from two essays are then reprised in a third, Image and Language in Psychoanalysis.

For those who are not specialists in Ricoeur or in psychoanalysis, the essay by Vinicio Busacchi that is attached as a Postface at the end of the volume should be read first. The editors could have usefully placed it at the beginning of the volume, had they intended a broader audience. The editor’s introduction by Jean-Louis Schlegel that does open the volume will be most useful to those already very familiar with Ricoeur’s work and initiated into the debates that have surrounded it.

In summary, while the volume may have been composed with Ricoeur specialists and students of psychoanalytic history and theory in mind as its core audience, it is of broad philosophical interest, both for theorists on the left and for others.