Marx & Philosophy Review of BooksReviews‘Marx and Freud in Latin America: Politics, Psychoanalysis, and Religion in Times of Terror’ reviewed by George García Quesada 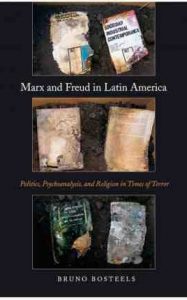 Bruno Bosteels
Marx and Freud in Latin America: Politics, Psychoanalysis, and Religion in Times of Terror

Marxism, psychoanalysis and aesthetic avant-gardes have been probably the most important European contributions to the critique of culture and society in the twentieth century. This book aims to interpret the reception of the former two intellectual currents in Latin America, and particularly the theoretical and political problems arising from their resulting local versions; but it also seeks to establish a dialogue between the history of that reception and the contemporary problems of the Left. This integration of past and present – necessarily mediated by the reflection on memory, as we will indicate later – is crucial for Bosteels’ approach to these problems.

In contrast with the numerous books which have been published on these topics since the 1970s – many of which he enumerates (23-4) – the author studies the consequences in Latin America of the theories of both masters of suspicion. In addition to this, he proceeds methodologically in a quite different direction from that literature, by analysing marginal Latin American texts and non-canonical authors, and by paying special attention to narratives (detective stories, film, autobiography, theater, poetry, romantic novel, etc.) and textual forms like epigraphs and aphorisms, which either deal with the problems of Marxism or psychoanalysis, or were written by exponents of these tendencies.

The appropriateness of this corpus responds not just to an intention to explore new sources, but has deeper grounds in the socio-historical Latin American context, as, in his words, “in the name of total commitment, the entire process of militancy proceeds not against the registers of popular culture, or over the heads of the people, but in an intimate dialogue with them, to the point where rumors, anecdotes, and the lyrics of a bolero can have a contagious force equal to the ubiquitous picture of Che’s dead body” (191). Also, by using these materials – certainly innovative sources – Bosteels presents relations between theory and other kinds of symbolisation in the Latin American Left, which would not otherwise be apparent.

Thus, far from trying a new extensive, all-encompassing research on the topic, Marx and Freud in Latin America deals with this reception by means of several case studies which, in a Freudo-Marxist spirit, are approached as much for their theoretical as for their symptomatic value. In spite of the heterogeneity of these cases, the book offers a unitary landscape rather than a collage of philosophical / theoretical stances, by situating the discussion on the traces of contemporary social theory deriving from Althusser-Lacan to Žižek, Rancière and, especially, Badiou.

Following this line of thought, Bosteels unveils a set of contradictions in the configuration of Latin American Left-wing political representations, where he prioritises the conflict between ethics and politics. This contradiction can be summarised in the opposition between an ethics of finitude – best exemplified by Levinas – based on the indistinctness of human condition, and a politics of truth – based on Marx – in which division and conflict, determined by the loyalty to an Event, are constitutive. While Bosteels opts for the latter, he indicates that the former currently predominate “in an authoritarian consensus regarding the dignity of the ethical in preference to all potentially illusory, if not purely voluntaristic, political commitments and partisanships” (305).

In Latin America, the author argues, such ethicisation has favoured a tendency to represent social life through melodramatic narratives and – to a lesser extent – detective stories, while most of the studied authors struggle – sometimes against their own spontaneous inclinations – in order to think their societies from the point of view of the impersonal, structural conditions. This perspective is additionally complicated by the very situation of Latin America in the world-system, and its history of uneven and combined development: from this starting point, the relation between European critical theories and Latin American societies can’t but follow a logic of missed encounters.

The book is divided in an introduction, ten chapters and an epilogue, and is not – except for the first one, about José Martí – chronologically ordered. The rest are situated in the second half of the twentieth century, featuring authors like León Rozitchner, José Revueltas, Tomás Gutiérrez Alea, Sabina Berman and Ricardo Piglia; In he course of the book, these intellectuals are put in a dialogue with their peers from other latitudes, like Mao, Brecht, Lefebvre and Benjamin. The inquiry for a political unconscious constitutes the main Freudian element in a book that deals mostly with the problems of Latin American Marxism: out of ten chapters, only three of them are dedicated to psychoanalysis. They are the two essays on Rozitchner, and the chapter on Mexican playwright Berman’s Feliz siglo, Doktor Freud.

Rozitchner’s arguments in Chapters 4 and 5 lead to political discussions of subjectivity: the problems of the revolutionary “new man” and the theorisation of capitalist and non-capitalist subjective formations. Besides treating some difficulties in Latin American Freudo-Marxism, these are the chapters where the topic of religion is most profoundly elaborated, and treated especially as a technology for the production of subjectivities. Since religion is one of the keywords in the subtitle of the book, the analysis of the theology of liberation is a significant absence in this book, and especially because in the Epilogue the Theology of Liberation is mentioned as a properly political, non-ethical version of Christianity in Latin America. The eighth chapter, on the other hand, argues against the “democratic culturalist” interpretations of Freud, taking Feliz siglo, Doktor Freud as an example for this critique. “Democratic culturalism” is a kind of historicism that absolutises the particular, denying the possibility of an access to universal truths, a vision which is alien to Freud, and which deprives psychoanalysis of its critical or even subversive impetus.

The other chapters are more focused on problems of Marxist theory and militancy. In this respect, the analysis of the relations between representations of society and politics are central. Whether in Revueltas’s cognitive mapping, Paco Ignacio Taibo II’s noir literature, or Ricardo Piglia’s version of social totality as conspiracy; these, among other authors studied in the book, help to delineate the displacement in the meaning of ethics and its relation to politics which Bosteels successfully demonstrates has undergone a profound displacement since the 1980s.

This breach between the representations of the political Left of the 60s to 70s and those of the 90s and 2000s is treated in the last three chapters of the book. In them, the approach to this gap leads to discussion of the problems of political memory and countermemory. Indeed, one of the final scenes of the film Amores perros, where a former guerrilla fighter turned hired assasin leaves a phone message to his unmet daughter, permits Bosteels to allegorise the “orphanhood” of the more recent Latin American Left: “if we want to prevent the failures, defeats, and heroic nostalgias of those years at the end of the 1960s and in the first half of the 1970s from continuing to produce merely pathetic messages on the answering machines of the next generation, we will also have to go against the grain of this image of the Left, which finds itself absorbed in the total rejection of, and simultaneous fascination with, the logic of war and state terror” (272).

A politically effective Left in Latin America would not only have to come to terms with its past defeats, but to reconfigure its memory as a real antisystemic countermemory. Thence, the importance of psychoanalysis in Marx and Freud in Latin America: as its author says, Freud’s method should criticise civilization by unmasking “its most cherished alibis and mass delusions in order to bring it face to face with its innermost and unsurpassable discontents” (251); but it should also force Left-wing thinking and activism into facing its own self-indulgent memories. From this perspective, Taibo’s option of re-mythifying instead of de-mythifying is not acceptable.

The prevalence of melodrama over the other ethical approaches analysed – and its persistence, given Martí’s early adoption of this kind of narrative – is one of the most interesting problems in Bosteels’ book. Melodrama offers “an imaginary conflict between a good conscience and the unjust state of affairs with which, in spite of its pureness or even because of it, this conscience is incapable of engaging?” (223). As the author rightly indicates, this refers to the Hegelian figure of the beautiful soul, which limits itself to emphasizing the distance between the ideal and the real, but doesn’t transform its conditions of existence.

But, even though Marx and Freud in Latin America relates melodrama to uneven development, the mechanisms on which this relation rely in Latin America are not sufficiently explored. This is further complicated by Bosteels’s assertion – via Althusser and Žižek – that uneven development is characteristic of every social formation, a thesis that won’t help to explain the particular case of Latin America. Likewise, religion emerges in the book as an important element to explain the importance of melodrama for politics, in a region that has also become famous worldwide for its TV soap operas. Yet, while Rozitchner’s reflections – which tend to prevail in the book’s perspective on religion – refer to Christianity as the most favourable religion for the appearance of capitalism, his views, as detailed in the book, don’t address the specificities of Catholicism in Latin America.

We consider, therefore, that the main limitation to the approach of this book is the impossibility with which the readers are left to determine the regional particularities from the global trends, a problem that lies in the omission of the historical mediations between global capitalism and Latin American social formations. A complementary historical interpretation of the melodramatic tendency analysed by Bosteels could be Bolívar Echeverría’s theory of the Latin American baroque ethos, whose “overaesthetisation of the world” and “excessive theatricality” of everyday life bear a notable family resemblance with melodrama as conceptualised in this book.

Overall, Marx and Freud in Latin America is dense but well written, and raises important theoretical and political discussions about this region and beyond. Its approach to valuable but neglected authors, and their being put into dialogue with other intellectuals and discussions – classic as well as contemporary – is a significant contribution for a matter whose clarification is urgent for critical theory as much as for activism, and not only in Latin America. And we can’t but welcome and endorse Bosteels’ call to repoliticise the discussions in the Left, and liberate ourselves from the current ethicism.