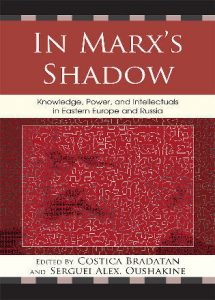 After more than twenty years since the demise of state socialisms in Eastern Europe, intellectuals still seem to be hopelessly attracted to this historical phenomenon with a mix of horror and a sort of concealed and yet irrepressible nostalgia. There is good reason for that. True, there was widespread repression of ‘free thought’. But precisely this fact testifies to the crucial role and importance that the regime gave to the intellectuals. Moreover, not only did intellectuals appeared there as a genuine counter-power to the official authorities – a standing that they lost ever after – but even the regimes’ own nature seemed to have been perfectly suited for an intellectual approach, functioning, as it did, on meaning and ideas, and not on the blind principles of numbers and efficiency as the current ones. Compared to that, the end of ideologies and the demise of state socialism amounts, for the public intellectuals, to a drastic restructuring in their social and professional status, and to a marginal, insignificant relocation in the social-political division of labor.

In Marx’s Shadow, edited by Costica Bradatan and Serguei Alex. Oushakine, sets out to unpack all the ambivalent and nuanced feelings that the convoluted relation between state socialism and public intellectuals carried with it. Thus, there are just as many types of texts in this volume as there are ways of working out a bitter-sweet past trauma.

A first kind of approach belongs to the category of unfulfilled mourning and tardy revenge. In their articles, Michael Epstein and Vladimir Tismaneanu take us straight back to the good old Manichean world of Cold War propaganda. Epstein starts from the idea that “what is usually called ‘Soviet Marxism’ would be more aptly called Plato-Marxism” (14), only to enlarge it quickly to the thesis that Marxism in general “potentially proves more staunchly idealistic than even Platonism” (17). This, of course, just so we don’t get the wrong idea that it was the Soviet aspect which corrupted Marxism into an oppressive ‘ideocracy’ – not at all, it was Marxism itself which necessarily led to that. However, there’s cause for some hope in the present: even if contemporary Russian thought is still dominated by metaphysical theories and aspirant ‘ideocracies’, the coming reign of ironists and liberal ideas seems to be at hand. Vladimir Tismaneanu’s essay follows the same predictable Popperian path. Its leading idea is that the millenary battle between good, individualist liberalism and bad, collectivist Leninism is not yet won in Eastern Europe by the former, since the latter has mutated into the equally bad, because equally collectivist, ideology of nationalism. But we should not be misled here: since the root of evil is Leninism, and nationalism is merely its contemporary disguised avatar, there’s something worth saving even in nationalism, as long as we purge it of its evil. This good nationalism is the civil, liberal nationalism, which is so decent and individualistic that it actually “can be seen as ‘postnationalist’” (235). Carried by this grand vision, Tismaneanu ends on an emphatic note (which sounds involuntarily cynical), praising our current realities in which “individuals seem to enjoy the new conditions, including the opportunity to live without utopian dreams” (237). Indeed, what better slogan for our ‘new condition’, in which we can finally enjoy the opportunity to live without utopian dreams, such as public healthcare, free education, relative welfare and so on.

What both Epstein and Tismaneanu manage to accomplish is to rejuvenate the old anticommunist argument by means of an infusion of more recent concepts and categories belonging to the French poststructuralists (Bourdieu, Foucault) and their American followers (e.g., Rorty). Even so, one could argue that in this seemingly awkward alliance, the poststructuralist vein finally reaches home. However, this is not the opinion of Veronica Tuckerova, who, in her rather tedious article on Havel and Fidelius’s theories of language, manages to come up with the pretty interesting point that Rorty’s philosophy “constitutes a radical apology for totalitarianism” (98), in that he “appears to be the intellectual heir to the tradition of totalitarian language … in effect apologizing for the totalitarianism of the left” (107). So while Marxism, communism, utopia are triumphantly sent to the dustbin of history in this volume, the fate of the New Left theories is still under discussion.

A less passionate but still quite vibrant type of article is represented by the commemorative portraits of heroic intellectual figures: Costica Bradatan writing on the martyrdom of Jan Patocka, and Aurelian Craiutu writing on the Romanian philosopher Mihai Sora. Apparently, the standards of intellectual heroism or dignity vary here quite considerably, if they can encompass at the same time the undeniable risks taken by the Czech phenomenologist and the rather quiet destiny of Mihai Sora, whose courage under communism consisted in minding his cultural business (as editor of one of the most popular book series) and developing a philosophy of dialogue in line with Buber and Levinas (which, one might say, truly takes some kind of intellectual courage). Perhaps a possible reconciliation is provided here by Letitia Guran’s article focusing on the phenomenon of the so-called `cultural resistance’ under communism: that is, the controversial claim that, even if they didn’t resist the regime in the open, the intellectuals resisted it and subverted it simply by doing nothing less than good, high, quality culture. In dealing with this rather problematic claim, Letitia Guran manages to solve it simply by shifting it to a safer and unproblematic terrain: from politics (an aspect which she quickly discards as Sthe fallacy of political reading” (56)) to ethics and aesthetics: “I would like to explore the modalities through which the aesthetic model could prove ethical qualities” and “shed some light on the specific relationship between ethics and aesthetics during communism” (55). That there is a strong aesthetical-ethical link in the phenomenon of ‘cultural resistance’ is undeniable. However, in trying to answer the existing challenges to the presumed political potential of this controversial phenomenon via a detour through the ethical-aesthetical, Letitia Guran practically accomplishes a sort of ‘cultural resistance’ to the very issue of ‘cultural resistance’, by once again dissolving the political issue of this phenomenon into an apolitical matter of morals and aesthetics.

However, the apolitical politics of the ‘cultural resistance’ not only had the political effect of accommodating the regime by staging a presumed yet quite harmless critique, but proved even more politically efficient for the new post-communist realities, in which the ethical and aesthetical categories of the dissident intellectuals have been translated smoothly and imperceptibly into the new aestheticization and moralization of all public and political concerns. From this perspective, a much more lucid view on this issue is provided by Natasa Kovacevic, who points to the unquestionable political role played by the intellectuals’ discourse under communism, and whose echoes and effects are still with us today: “anticommunist dissident writing is interesting in so far as it overlaps with Western Cold War discourses that combine cultural racism with political and geographic hierarchies, associating democracy with the West, and communism/authoritarianism with the East” (132). Moreover, in a sort of possible answer to Epstein and Tismaneanu’s strategy of burying all possible emancipatory theory and practice under the triumphant flag of anticommunist reasonableness, Kovacevic shows how “this political demonization has affected communist regimes and philosophical thought alike: it established a short-circuited correspondence between the complex and varied body of Marxist (or other leftist) intellectual thought and Eastern European regimes as the only possible praxis launched by such thought” (147).

In this volume dealing with the role of the intellectuals in communist and post-communist Eastern Europe, probably the most relevant and actual essay is the one by Elena Gapova. Starting from an account of the failure of the ‘orange revolution’ in Belarus and of the subsequent intellectuals’ frustration with their fellow countrymen, Gapova spells out the particular interests, conceptual tools and social dynamic that shaped up the intellectuals as a particular group opposed to the rest of their ‘retrograde’ and ‘ignorant’ compatriots. The fact that, in Belarus, the anticommunist discourse didn’t succeed in finally dissolving itself into its own proclaimed utopia like in other East European countries (that is, the integration into global capitalism as a periphery of cheap labor and resources) not only keeps alive the wager of this kind of public discourse, but also highlights – by means of contrast – the particular political mandate of the intellectual dissidents and the profoundly interested nature of their disinterested knowledge. From this perspective, Gapova’s essay could function as a mirror for some of the authors in this volume, whose spectacular political and institutional careers have been built on the inexhaustible refrain of anticommunism and, in that, in the cool air of Marx’s shadow.