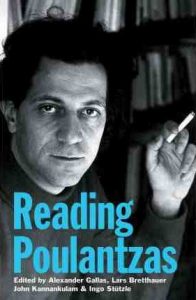 James Parisot is a PhD Candidate in Sociology at Binghamton University. He has published on …

“There is still no coherent historical-materialist account of the state” (Hirsch and Kannankulam, 56).

Nicos Poulantzas, one of the key figures of the Marxist state debate that raged in the late 1960s through the 1970s, was increasingly ignored in the next two decades as the victory of neoliberalism secured its grasp on world capitalism. Over the last decade, in the context of debates about the rise of new state forms, globalization, and the formation of transnational class and state relations, Poulantzas has been re-discovered, appearing to be more relevant than ever. Reading Poulantzas attempts to pick up where Poulantzas left off, analyze the high points of his work, and criticize what some scholars see as his shortcomings, both on his own terms and in the context of the extent to which his ideas are useful to understand capitalism today.

This volume contains an impressive collection of discussions from both veterans of the debate and newcomers well versed in Marxist state theory. It is divided into four sections. The first addresses issues of ontology and epistemology. This is followed by several essays that look at Poulantzas’ theory of social power, particularly as related to Foucault, and an essay on Poulantzas and feminism. Third, several essays discuss time, space, and transnationalization. The final essays deal with the political implications of Poulantzas’ ideas.

In the first section, a few themes stand out. It is generally agreed that Poulantzas’ goal was to move beyond liberal pluralist, institutionalist, and Marxist instrumentalist conceptions of the capitalist state to explain the state not simply as a thing but as a social relation (Jessop 41). In this line, Poulantzas expands beyond Marx to begin to write his unwritten book on the state that moves beyond the reification and fetishization of liberal ideology to understand the basic social forces driving the capitalist mode of production. He also moves beyond Leninist conceptions of the state as a class instrument that can be captured to rethink the state as a “relationship of forces, or more precisely the material condensation of such a relationship among classes and class fractions, such as this is expressed within the State in a necessarily specific form” (Poulantzas 2000, 128-9). Rather than seeing the state simply as an institution or tool of class rule, Poulantzas sees it as a strategic terrain where social classes compete for power.

Yet the capitalist state is not a democratic space. Capitalism is characterized by a separation between ‘the political’ and ‘the economic’ which gives the state a degree of relative autonomy (Hirsch and Kannankulam 59-60). Relative autonomy, or the fact that bourgeois class rule is expressed not as direct class rule but indirectly through the state, makes possible the organization of hegemony between fractions of capital within the state, and between capital and subaltern classes. Overall, the state tends to organize a ‘general interest’ between contradictory social forces within the capitalist class and disorganize subaltern classes, serving as a global force holding capitalism together (Poulantzas 1978a, 191).

Another theme that runs through the essays looks at the ways Poulantzas theorized social power and possible limits to his conceptions. Particularly emphasized has been the notion that Poulantzas resorted to class reductionism and neglects forms of non-state social power. A contribution by Jörg Nowak, to take one case, looks at the extent to which Poulantzas neglected feminism and, vice-versa, the way feminists have neglected Poulantzas. Poulantzas did note “relations of power do not exhaust class relations and may go a certain way beyond them” (Poulantzas 2000, 43). These, he also discusses, includes “sexual relations between men and women” (Ibid.). Yet, as Nowak notes, “he neither analyzes the interpretation of class and gender relations systematically, nor does he have a theoretical concept for what he provisionally refers to as the ‘relations between men and women’” (Nowak 124). While it is clear that Poulantzas’ gender analysis is highly limited and problematic—almost non-existent—it may be possible to expand on Poulantzas’ basic idea of the state as a condensation of social relations to show the extent to which gender relations are constituted through and reflected back upon by the state in a way that remains to be developed.

Another important theme of the book are the relations between Poulantzas, Gramsci, and Foucault. Poulantzas engaged with Gramsci throughout his work, particularly in his use of the category of hegemony, and in his last book discussed Foucault. According to several essays in the volume, though, it is questionable to what extent he adequately understood either of these thinkers. Perhaps more importantly, it seems an open project to locate the extent to which the insights of Gramsci and Foucault are, actually, consistent with Poulantzas’ thought.

Poulantzas’ most significant critique of Foucault is that he fails to ground his theory of power as a diffuse process in a materialist conception of capitalism. Poulantzas argues, “for Foucault, the power relation never has any other basis than itself” (Poulantzas 2000, 149). This prevents Foucault from theorizing resistance to power. Poulantzas’ interpretation of Foucault is challenged in several essays. Urs T. Linder suggests that Poulantzas misinterprets Foucault in his critique; the latter does base his notion of power in material relations other than themselves, such as in sexual relations, relations of knowledge, and production (Linder 140). And Sonja Buckel suggests that there is a continuity between Poulantzas’ notion of the state as a material condensation of social forces and Foucault’s idea of governmentality, implying that if the two are brought together it may be possible to keep to what is important in Poulantzas’ work while moving beyond his class reductionism (Buckel 154, 166). Finally, an essay by Peter Thomas suggests that Poulantzas overestimated the extent to which Gramsci internalized a Leninist notion of the state. He suggests, in fact, “Gramsci’s ‘integral state’ and Poulantzas’s ‘states as the material condensation of a power relation’ are in fact much closer than Poulantzas was willing to concede” (Thomas 284). These discussions of Poulantzas in relation to Foucault and Gramsci suggest that a larger synthesis of the theories of state and social power employed by these thinkers may be possible, and this could be a productive area for future research.

One last theme the book addresses, in the context of debates about globalization and neoliberalism, is the issue of Poulantzas’ thinking about ‘the international’. In Classes in Contemporary Capitalism, in particular, the author presented a uniquely insightful early discussion of the internationalization of capital and states (Poulantzas 1978b). The general idea is that the penetration of Europe by American capital inserts American power in the European social formation, suggesting conceptually that a rethinking of state/class/capital relations across borders is called for.

Poulantzas’ thinking about these issues has become increasingly relevant in the context of debates about the possible rise of a transnational capitalist class and transnational state. A contribution by Jens Wissel, for example, argues “global relations of power and control are condensed in transnational networks” (Wissel 221). Thus a transnational power bloc has formed, and Poulantzas’ conceptions of state relations and class relations as based in national space are not able to capture this. While I might suggest that these types of argument tend to overstate their case, and the contributions in this volume such as this essay do not provide solid empirical evidence to support their points, these essays may be of some interests to scholars looking for nuanced ways of thinking about the relations between capital, class, and states in the age of neoliberalism and global capitalism.

While the book leaves out some potentially rich criticisms of Poulantzas, such as his total neglect of race as embedded in global capitalism, or an institutionalist critique of his work, overall the book is the most important recent contribution to understanding Poulantzas and locating the contemporary relevance of his work that has been published in English. While Aronowitz and Bratsis, ed. Paradigm Lost: State Theory Reconsidered is still the best overall introduction to Poulantzas’ work in the broader context of the history of the Marxist state debate, for students, scholars, and activists looking to move beyond this, Reading Poulantzas is a highly useful source.