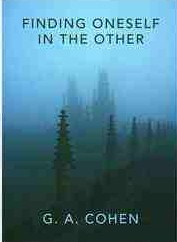 G A Cohen
Finding Oneself in the Other

Martin Heidegger famously denied any interest in Aristotle’s life apart from the fact ‘that he was born at a certain time, that he worked, and that he died.’ Heidegger’s rejection of philosophical biography is surely too strong. The life story of a philosopher can shed much light on his arguments. And there are surely many facts one could learn about a philosopher—that he was a member of the Nazi Party, for example—that would properly influence one’s take on his philosophy as a whole.

Finding Oneself in the Other is in a sense very biographical. It is the second in a three-volume set of papers by the late G.A. Cohen, political philosopher and proud member of the `Non-Bullshit Marxism Group’ (95). The first volume, previously reviewed in this journal by me, ‘brought together previously uncollected essays in political philosophy,’ while the third (as yet unpublished) ‘will include lectures and other writings on the history of moral and political philosophy.’ But the second volume is very different from its two companions. It ‘combines philosophical and nonphilosophical writings of a more personal nature, which depart from the strictures of formal academic prose’ (vii). As the back cover proudly proclaims, Finding Oneself in the Other ‘brings together some of Cohen’s most personal philosophical and nonphilosophical essays.’ The personal nature of the writings contained in this book makes it at times read almost like an autobiography, and a number of the essays—particularly the lead essay on Cohen’s mentor, Isaiah Berlin (‘Isaiah’s Marx, and Mine’), and the aptly-named ‘Valedictory Lecture: My Philosophical Development (and Impressions of Philosophers Whom I Met along the Way)’—are straightforwardly autobiographical.

Of course, the book aspires to a certain level of intellectual coherence. It draws its title from the opening line of Cohen’s essay ‘Rescuing Conservatism: A Defense of Existing Value’: ‘Hegel says that “Spirit” achieves freedom when the subject finds itself in its own object, so that “it is at home with itself in its own otherness as such”’ (143). And much of the book does indeed deal with the ‘theme of finding completion in relation to the world of other human beings’ (xi). This is particularly evident in the penultimate essay in the book, ‘Notes on Regarding People as Equals.’ Here Cohen argues that people ought to treat each other as equals, ‘not because of some feature common to us that we perceive, but rather … because of the nature of the relationship that we seek, and value.’ It is notoriously difficult to specify precisely what property all humans might possess that would justify treating them as equals in any non-trivial sense. It is easier to defend the idea that ‘you treat the other as an equal as a necessary condition of your own self-realization: but only as a necessary condition, because self-realization is not achieved unless she reciprocates, in her own quest for self-realization’ (194).

Other essays in the collection, however, address the title theme only in the sense that they deal with human relationships in some way. This is true of both of the autobiographical essays mentioned above. It is also true of the longest essay in the collection, ‘Two Weeks in India.’ This essay—the title of which says it all—is just what you would expect from an intelligent and conscientious leftist just back from visiting India for the first time. But just because the essay makes for an interesting and engaging read does not mean that it has a serious point to make about finding the self in the other—or any other serious point, for that matter. It’s not a bad story, at least if you like reading about the lives of radical philosophers, but that’s about it.

In addition, many of the specifically philosophical essays in the collection that do address the topic are rather undeveloped. This is particularly true of ‘Notes on Regarding People as Equals.’ Cohen himself declares at the start of this essay that ‘What follow are preliminary reflections, many of them barely half-baked. (If you don’t think I really think they’re half-baked, do read on.)’ (193). He’s not kidding, either; the idea that treating others as equals is a precondition for self-realization is an intriguing one, but Cohen never really either spells out just what this means or why one should believe it is true. (It could hardly have been otherwise, given that the essay is only eight pages long.)

It is also true of the final essay in the collection, ‘One Kind of Spirituality: Come Back, Feuerbach, All Is Forgiven!’ This essay, a mere six pages in length, tries to offer some sort of atheistic take upon spirituality. It is a quarter-baked at best. Of course, Cohen was still working upon both this essay and the previous one at the time of his death, and so it is not surprising that both are rough, unfinished, and undeveloped. Still, I am sceptical that further work could have made the essay on spirituality anything worth reading. In that essay, Cohen expresses a desire to use religious language in a way ‘that treats it neither as deity-affirming nor … reductively as (at best) merely metaphorical’ (202 Cohen’s emphasis; see also 205). Religious folks have been trying to accomplish this task for centuries; these efforts, without any exception of which I am aware, have produced nothing but high-quality, top-grade bullshit. (See also: evil, problem of.) Perhaps Cohen would have realized this had he been able to work further upon the project.

Cohen is, of course, an expert on bullshit. Not because he produced more of it than most philosophers—quite the contrary—but because he studied it more carefully than most. Finding Oneself in the Other also reproduces ‘Deeper into Bullshit,’ Cohen’s response to Harry Frankfurt’s classic essay ‘On Bullshit.’ The response is one of the two most philosophically sophisticated and well-developed papers in the collection, and as an added bonus it is reproduced with an unpublished follow-up entitled ‘Why One Kind of Bullshit Flourishes in France.’ (The two essays are grouped together here in a chapter entitled ‘Complete Bullshit.’) The other top-quality paper in the collection is Cohen’s response to Middle Eastern terrorism, ‘Casting the First Stone: Who Can, and Who Can’t, Condemn the Terrorists?’ It is also reproduced with a previously-unpublished companion, entitled ‘Ways of Silencing Critics.’ Both of these philosophical gems are well worth reading, but their connection to the theme of the volume is tenuous at best.

How successful, then, is Finding Oneself in the Other? The title notwithstanding, it does not really offer a series of sustained engagements with a single topic. (In that regard, it is very unlike its predecessor, which deals extensively with some of the major themes in Cohen’s work.) Instead, it places one in the company of G.A. Cohen in a variety of settings. The reader will get to learn a few things about Cohen this way. That most members of his family were Communists, and that his aunt once danced with Stalin (17). That he attended McGill University, and while there kept his distance from ‘a certain species of person that was well represented at McGill, a species consisting of suit-wearing bourgeois Zionistic middle-class Jewish boys, a species to which, incidentally, my nonrelative Leonard Cohen then belonged, and one from which, as you may know, he later escaped’ (177 Cohen’s emphasis). That he was dreadfully ignorant about mosquitoes and malaria upon his visit to India (47). That he could not fathom ‘how anyone can think that a Montreal bagel isn’t objectively better than a New York bagel’ (77). None of this amounts to anything particularly deep, but I suspect that a day spent hanging out with John Rawls or Jürgen Habermas would not produce a higher rate of profundities than this.

In the end, Finding Oneself in the Other works primarily as a memorial to Gerald Allan Cohen, the man, and not his ideas. Both deserve to be remembered. And so the second volume in this trilogy is worth reading, albeit for different reasons than the first.