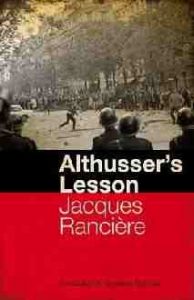 Marx famously opens The Eighteenth Brumaire with the dictum that ‘man makes his own history, but not as he chooses.’ It would not be wrong to describe Rancière’s first work as a narrative of his teacher Louis Althusser’s making of French leftist history, even if not always as he chose. The new translation of this work, originally published in French as Le Leçon d’Althusser in 1974, constitutes a sustained reflection on the role of Althusser’s philosophy inside the Parti communiste français (PCF) through the debacles of May `68. Rancière tells a compelling story about the political effects both deliberate and unintentional of the relationship between academic Marxist discourse, institutional left politics, and the iconic mass rebellion of nine million workers that would later be known as ‘the beginning of the end’ of radical French leftism. May `68 anchors the discussion of a multifarious set of interrelated phenomena: the torturous struggle of the PCF to reorient after the death of Stalin and the Sino-Soviet split, the development of the author’s critical relationship toward Althusser and the PCF, the ever-proliferating debate on the relationship between theory and practice, the Maoist turn in French theory, the contested role of Marxist concepts in student struggles against the administrative university in late capitalism, the theoretical and political mark that Althusser’s work on ideology left on these struggles.

As Rancière makes clear, the object of his critique is not Louis Althusser, a living, breathing, human individual with a private life and personal intentions, but instead Althusserianism, which is “one way of practicing philosophy” (67). Althusserianism is thus much more about a style or mode of philosophical engagement than it is about specific philosophical tenets. This specific attitude toward philosophy so strikingly exemplified by Althusserianism, Rancière argues, is one “that practice had already [in 1968] condemned” even though readers will identify its effects in the contemporary academy (xx). Interested then in the methods of political practice both espoused and implied by Althusser’s writings, Rancière focuses much more on certain hallmark Althusserian concepts – the anti-humanistic process without a subject, the science/ideology opposition, the concept of ‘orthodox’ Marxist-Leninism – than on others (overdetermination and interpellation are basically absent). Rancière does not attempt to give a holistic or comprehensive treatment of Althusser’s terminology nor of this thought; instead, Rancière investigates the political and philosophical position from which such a philosophy could be enunciated.

The book is organized as a series of four ‘lessons’ learned from Althusser – one each on orthodoxy, politics, self-criticism, and history – followed by a concluding chapter on the role of discourse in political struggle. Included also is an Appendix of Rancière’s 1969 essay “On the Theory of Ideology” which first articulated Rancière’s break with Althusser and the latter’s “Student Problems.” Considered as a whole, the volume allows the reader to track the development of Rancière’s conceptualization of these problems and his mounting distance from Althusser from the ‘morning after’ `68 through the mid-70s. As Rancière advises the reader, it might be most helpful to read the book as a critical elaboration of the 1969 essay. As his thought develops, Rancière’s puts more and more emphasis on the pedagogical question of philosophy: how must one think of one’s role as a philosopher if one is to affirm Althusser’s interpretation of Marx, of history, of the masses, of the student rebellion?

It should come as no surprise then that Rancière stages the break between himself and Althusser on the interpretation of Marx’s oft-quoted though rarely understood eleventh Thesis on Feuerbach. In announcing that one must change and not merely interpret the world, Marx articulates the necessity of a critical consideration of the role of knowledge, theory, and history in relationship to the proletariat in general and to specific emancipatory struggles in all of their particularity. Rancière interprets Althusser’s comportment toward the so-called masses of ’68 as revealing his reactionary and problematic ideas about theory, the vanguard, the education of educators, and the creation of knowledge in the struggle against capitalism.

Rancière interprets Althusser’s position on these questions in relation to the division between intellectual and manual labor. In addition to levying a sustained critique of Althusser’s conception of philosophy in `Reply to John Lewis’ and `Marxism and Humanism’, Rancière also seeks to develop his own response to the so-called ‘theory-praxis problem’. While it is now commonplace in Marxist criticism to conceive of theory and practice as inter-related – theory is itself a practice, practices organically develop their own theories or self-reflections – Rancière is painfully aware that even the theory-praxis question itself is already posed from the side of theory. The supposedly dialectical mediation of theory and practice preserves the priority of bourgeois elite academics over the working class, but all the more perniciously so, for it masks its domination as “only the language of class struggle can serve the double function of normalization and recuperation that defines the relationship of revisionism to revolt” (117). Readers familiar with Rancière’s The Ignorant Schoolmaster or Nights of Labor will not be surprised by the author’s vitriol for a philosophical Althusserianism that establishes and maintains a vanguardist illusion of its own political efficacy as arbiter of the ‘true’ Marxist discourse holding the mantle of class antagonism.

The sustained criticism of Althusser which spans all four of the lessons Rancière identifies in the aftermath of `68 circle around one key element that, he argues, Althusser cannot account for: power. On the theoretical level, Althusser time and time again, in his distinction of ideology and science, in his defense of historical materialist orthodoxy, in the discussion of ideological state apparatuses, in the insistence on the autonomy of theory, forgets or avoids the role of power in its real and material organization. Moreover, Althusser forgets that the practice of elaborating these theories also comes inside a material organization of power. As Rancière writes, “Fundamentally, Althusserianism is a theory of education, and every theory of education is committed to preserving the power it brings to light” (52). Althusser’s philosophy, by Rancière’s estimation, is a theory of theories. Even at his supposedly most concrete, in the discussion of the ideological tools of the bourgeoisie, Althusser reinscribes the problematic at a theoretical level, overlooking and minimizing the role of real, material conditions of real, historical men. In, for example, locating bourgeois ideology at the level of humanism and economism, Althusser overlooks the material basis of ruling ideology: its power to command workers, to force them to accept unlivable conditions, and to damage their capacities for conceiving of a world organized otherwise. All these, Rancière argues, are achieved through a particular organization of institutions: the university, the factory, the penitentiary, etc. The unifying thread of Rancière’s sustained criticism of Althusser, then, might be articulated thus: criticism on struggles against capitalism and of the academy’s role in that struggle must begin from a reflective evaluation of the power dynamics of the state, the forces of production, and of the position of the evaluator.

For all of the criticisms of Althusser and Althusserians, it would be a mistake to read Rancière’s strategy as wholly condemnatory. In each of the four ‘lessons’ learned from Althusser, Rancière carefully describes the fraught political landscape to which Althusser responds; for example, Rancière argues that the role of censorship and the complete subordination of Marxist discourse to party ideology under Zhdanov and Stalin leads Althusser to insist (not altogether wrongly) on the autonomy of theory. Despite the sustained attacks on Althusserianism, then, we would be wrong to read this book as polemic; it is subtle and nuanced even as it is incisive and damning.

For all the pomp decrying the irrelevance of minute theoretical debates on Marxist scholia, we should not forget the aim and goal of the book: it is a theoretical reflection on “what constitutes the discourse of an acknowledged Marxist in 1973” – and we should remember here what this means: a Marxist acknowledged by the established party apparatus and the institutional academy (xix). Has Rancière not simply reproduced the Althusserian move par excellence: the academicizing of political practices on the Left? Does not an astute and impassioned reinterpretation of the eleventh Thesis rehearse the very problem it seeks to combat? If, then, the volume is to avoid philosophers’ necrotic tendency to bicker needlessly among themselves, then its merit must be judged on its ability to contribute to a kind of practical activity: a new way of practicing philosophy, of engaging in student struggle, of supporting anti-capitalist tendencies inside the university.

In this sense, the translation of this volume comes at a prescient time: whether one considers the massive student protests in 2011 in London and Chile, the 2012 months-long Montreal student-general strike, or the various smaller protests and occupations on university campuses across the world in conjunction with the Occupy and Arab Spring movements, there has been a renewed focus on the university as a political space and on academics as political players. In the wake of these resurgent student rebellions, Rancière’s reflections on the student-turned-general strike of ’68 and on the misplaced and pre-emptive criticisms by academic Marxists open the space for a critical and politically sensitive dialogue between professors, theorists, activists, students, and workers over the political space which the university has time and time again proven itself to be. Moreover, it forces academic Marxists to consider their generally passive position in relation to these protests; if one’s only engagement with student concerns is through dialogue and writing, Rancière shows, one might have reinscribed oneself in the elite ivory tower ideology. If Althusser taught Rancière four lessons, then Rancière teaches at least one to us: that academic and putatively Marxist criticisms of student rebellions are often concerned much more with preserving the privilege of the critic than destroying or subverting bourgeois social structures. Or, rather, that even if university professors frequently choose to hamper or ignore campus struggles, student activists are making history anyway.