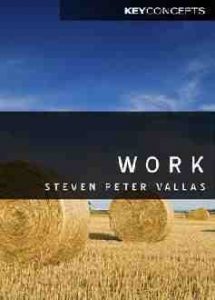 Sean T. Murphy is studying for his masters in Contemporary European Philosophy at University …

A recent publication in the Polity Press Key Concepts series, Vallas’s book, Work, is an exhaustive study of a concept that has, over the past half-decade or so, been brought under the lenses of scholars in a variety of different fields of research, from sociology to economics, politics to philosophy. Vallas, a sociologist, notes straight out of the gate that as the study of work becomes enmeshed in disparate academic circles, it is increasingly difficult to ‘put the pieces back together,’ (3) and form a unified argument about the status of work today that is both clear and able to sidestep the jargon that each discipline has come to associate with this concept. Vallas has attempted to produce a book that answers to these misgivings. In its best moments, Work fosters a dialogue that cuts across the above mentioned disciplines by way of a general structural critique.

The book is divided into six chapters. The Introduction acquaints the reader with some general schools of thought surrounding the sociology of work. Marxist, ‘symbolic interactionist’ (also known as the Chicago School), Feminist, and Institutionalist approaches to work are all covered in detail. Regarding the Marxist sociology of work, Vallas discusses the wage-labor relationship, as well the modern necessity for labor to be organized on the basis of commodity exchange. It is not about what a company produces, but whether or not they can exchange their products for more than it cost to produce them (20). The phenomenon of ‘labor-time’ is discussed in order to highlight the struggle that occurs within firms between workers who ‘seek to limit the exploitation of their own labor’ and employers who respond by ‘mobilizing every effort imaginable to exercise control over the labor time [of their employees] that they nominally own’ (20). As Vallas notes, a Marxist theory of work is one that persistently acknowledges the fundamentally antagonistic relationship between employee and employer. Such workplace antagonisms were later analyzed by Chicago School theorists, as they set out to define a general system of meanings common to all walks of occupational life. It was their view that such antagonisms as those unearthed by the Marxists could be resolved by breaking with two traditional notions of workers: the humble and the proud. Instead of dividing labor along these arbitrary lines, these theorists argued that noble or ‘white collar’ work manifested the same features as ‘dirty,’ ‘blue collar’ jobs. This shared sense of pride in one’s work, regardless of job content, creates a system that gives workers ‘occupationally based identities’ (24); and bestowing a universal value on work, regardless of the environment in which it is performed, readies laborers to combat the recurrent threat of on-the-job alienation and exploitation.

Feminist theories of work are outlined next, with the analysis centering on why gender inequalities at work have proven so persistent over time, despite numerous structural and legal initiatives to level the playing field. Scholars in this line of work research attempt to dispel the myth that there are ‘essential qualities of men and women workers’ (29). Vallas notes that gender inequalities at work should be studied alongside, rather than in isolation from, racial or ethnic inequalities. Racial inequality at work is a persistent problem, characterized by jobs becoming ‘racially-typed’ (124) or socially closed to certain ethnic groups. These two areas of work studies highlight reciprocal problems that are deeply embedded in the faulty structure of capitalist society (131). Finally, institutionalist approaches, in ways similar to the Chicago School, focus on ‘the myriad of ways in which organizational environments shape the structure of work, compelling managers and executives to conform to deeply held expectations rooted well beyond the organization’s walls’ (30). The point is to reveal the ‘normative orders and structural fields that exact far-reaching influence’ (32) over the work practices of different firms, thus situating the critique of work amidst a discussion of the internal flaws of late capitalism.

As we enter the body of the text, the debate surrounding work begins to develop a distinctive shape. Contemporary work scholarship has tended to focus on the consequences that have resulted from a shift in the middle of the twentieth century from ‘Taylorism,’ a euphemism referring to the idea that there is a single, ‘best’ way to perform a certain job, to ‘flexibility,’ a concept that speaks to ‘the fluid logic of work organizations that promises to free workers from the disciplining structures of the past’ (61), i.e. rigid labor-controls. The author does well to note how the formation of flexible labor regimes has led economically vibrant industries to converge with one another, a process attuned to the shifting landscape of capitalism. Flexibility enables smaller firms to establish network-based relations, which makes it easier to exchange technologies and information. Furthermore, flexibility allows firms to focus on singular product design or one particular aspect of a project. This ‘flexible specialization’ has come to replace the competition that was prevalent during previous labor regimes with a new culture of firm collaboration capable of, ‘accomplishing through network embeddedness’ what firms had ‘previously conducted in-house’ (67).

In shifting the discussion from the organization to the worker, Vallas notes that the smaller firms embedded in these new production networks are often able to evade certain standard employment practices as they are no longer subject to the ‘vertically integrated structures’ (68) of labor control and regulation that were part of the older labor regimes. When no longer being examined under the careful eye of a major corporation, smaller firms achieve a certain level of autonomy, which they exploit by offering lower wages, fewer benefits, and harsher working conditions. Casting a negative light on flexibility, the author notes that it does not seem to have an answer to the question of gender inequality at work. The ‘gender composition’ of certain jobs has not changed, despite the flexible nature of the modern job market. Vallas cites an illusion of progress as the cause of continued gender segregation. ‘As young women have enjoyed new opportunities at work, however limited they may be, the need for continued action seems less and less apparent from their point of view’ (111). Flexibility creates the illusion that the historical nature of work is undergoing significant changes. But when viewed collectively, little has changed.

This raises the question, is there a dark side to flexibility? Vallas answers with a resounding `yes’. He cites social movements that occurred in Western Europe in 2001 as evidence to support his claim. Those workers involved in these movements targeted their protest actions against a condition of ‘precarity’ (82). This was defined as ’the condition of being unable to predict one’s fate’ or having one’s ‘life and time be determined by external forces’ (82). A number of slogans came to dominate the social and political discourse surrounding the movement, with ‘flexploitation’ being the most popular. The idea being that the flexible nature of work in late capitalist society was being exploited by employers, as firms recycled through employees, creating a wildly unstable job market. Thus, one of the major problems with the nature of flexibility, and one which is not directly touched on in Vallas’s study, is the disintegration of a strict domain of meaning surrounding the concept of work. The necessarily volatile nature of modern markets has altered the meaning of work and such an alteration in meaning has been capitalized on (literally) by large corporations and those who wield the power of labor-control.

The blame, so the author would have us believe, lies in the ‘neo-liberal formulation’ (84) of contemporary labor arrangements. Neo-liberal economics and politics have inaugurated a system that idealizes flexibility. To overcome this systematic issue, the public must be made aware that ‘the abandonment of vertically integrated structures in favor of more flexible networks and webs of capital accumulation has been politically induced’ (165) by a specific neo-liberal agenda seeking the continued production of surplus capital by whatever means necessary.

Such ideology has become a cornerstone feature of contemporary discourse surrounding the benefits of globalization. Vallas condemns neo-liberal economic policies for enabling ‘a society premised on the urge to produce’ (168). This late capitalist, neo-liberal ‘urge to produce’ has spawned the globalized world we live in today and is labeled as one of the major reasons for the continued exploitation of workers across the globe.But aside from these scathingly insightful remarks Vallas’s discussion of the relation between work and globalization is underwhelming and stale. He simply recycles the general pros and cons of globalization, arguments that can be found in any introductory textbook on world politics. He does, however, gain back some of the momentum lost in the discussion of globalization by closing his book with a profound and creative message: in order to understand the future of work and the many changes that lie ahead for this concept, scholars must develop an appreciation for work’s ‘politically under-determined’ (164) nature. That is, how are we to react now that ‘the introduction of new technologies and the global dispersion of production worldwide have eroded the very institutional platform on which the work society has historically stood?’(168). In the end, Work proves to be an ambitious critique of the current structure of global capitalism. Nevertheless, the book does not live up to its promise of escaping the jargon-laden terrain of the debate in which it is entrenched. And this, in the end, leaves the most important character behind. And so I ask: where is the worker in Work?