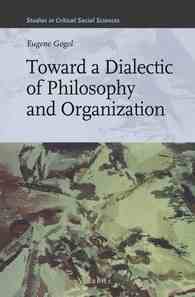 Eugene Gogol
Toward a Dialectic of Philosophy and Organization

Andy Blunden (andyb@marxists.org) is an independent scholar, active on the Marxist Internet Archive, …

This book continues an unfinished project of Raya Dunayevskaya to elaborate a dialectic expressing the development of both Marxist philosophical thought and the spontaneous organization of the workers’ movement as a single process. The aim is to “work out the relationship between mass organizations often arising spontaneously and the thinker-activists who reject elitist vanguardist organizational solutions” (382) and answer the all-important question: “What are the organizational expressions that can concretize” the “great transformations” needed today?

Gogol recapitulates and continues Dunayevskaya’s reading of Hegel mediated by Lenin’s Annotations on Hegel’s Logic. Like all interpretations of Hegel, Gogol relies on a selective reading. The focus is on the final sections of the Phenomenology (Absolute Knowledge), the Logic (Absolute Idea) and to a lesser extent the final section of the Introduction to the 1830 edition of the Encyclopedia and the penultimate section of the Encyclopedia. (Hegel ends the Encyclopedia with a quote from Aristotle). These final sections (especially the Absolute Idea and Absolute Knowledge) read like the last verse of the Twelve Days of Christmas, recapitulating the entire journey in triumphant, telescopic prose, giving the impression of an already-completed identical subject-object. And herein lies the problem, I think.

Toward a Dialectic ought to be taken as an important contribution to an on-going project to reveal the logic of the development of emancipatory organization. Marx pointed out in the Grundrisse (1973, 101) that thousands of years of social development leading to capitalism was necessary before thinkers could grasp the concept of value. In his study of the workers’ movement Marx made it clear that all the theoretical problems had first to be solved in the real actions of the movement, before the “the working-up of observation and conception into concepts” would be possible. Marxists have of course paid attention to these developments. However, what is needed is to demonstrate the logic at work in the whole movement, as opposed to the virtues and vices of this or that form of organization.

Consequently, for Marxists, the detailed tracing of the forms of working class organization from its inception up to today is a precondition for solving the deep conundrums facing emancipatory projects today. And for bringing this to our attention and making a first attempt, Gogol deserves considerable praise.

As but one individual, Gogol has been obliged to limit the scope of his study. He begins with Marx’s intervention as a publicist in the 1848 Revolutions in Europe, dismissing as utopian the ‘secret societies’ like the Communist League which Marx had joined in 1847. But these ‘secret societies’ were precisely the form in which the workers’ movement first emerged, under conditions of isolation and repression by Combination Laws. They were the foundation on which the union movement and all the associations of the working class were built; furthermore, such forms remain in existence to this day. The study terminates with the Spanish Revolution, and brief comments on the Hungarian Uprising of 1956. This allows Gogol to follow the development of workers’ organization through the words and actions of the great Marxists from Marx to Luxemburg and Trotsky. But it also limits the study to an emergent industrial working class as Subject and avoids any consideration of the conditions of the post-World War Two world. Gogol has posed the question, that of disclosing Reason in the real emancipatory activity of human beings. “Marx,” was he says, “taking part in the movement at all places and having a concept of that movement.” (57) – But this is just what we are lacking today – a concept of the emancipatory project of the twenty-first century.

Here I must return to Gogol/Dunayevskaya’s reading of Hegel effectively as an accomplished identical subject-object. While criticizing Lenin for overlooking the final words of the Science of Logic in which Hegel prefigured the scope of the yet-to-be-written Encyclopedia, and the Introduction to the Encyclopedia included with the Shorter Logic, they do not notice that Lenin skipped over 100 pages of the Science of Logic concerning the Subject, with just the remark: “Or is this after all a tribute to old formal logic? Yes! And another tribute—a tribute to mysticism = idealism.” What an irony it is that the great theorist of the vanguard party didn’t pick up when Hegel was talking about the formation of the Subject. Lenin read the Logic as a theory of cognition, rather than of the development of objective thought forms (i.e., necessary forms of activity) themselves. Gogol/Dunayevskaya repeat Lenin’s error and this is, in my view, the very heart of the problem which a “dialectic of philosophy and organization” has to address. It is easy to see how Lenin missed this, though – it is so obscure!

Hegel did not understand the development of activity as the expansion and progression of an already-identical subject-object. Rather, the Concept begins with separately posited Individual, Particular and Universal concepts (or minds). The section of the Logic on Subjectivity describes how these disparate and conflicting notions mediate one another, gradually coalescing into a real concept (or social movement). It is then through interaction with the Object (the already existing community), objectifying itself in the life of that community, that the Idea develops towards an identical subject-object. If these complex processes of mediation are overlooked, it is surely impossible to grasp the triumphal prose of the Absolute.

This undifferentiated conception of the emergence of the emancipatory idea is reflected in Gogol’s exposition of the development of worker solidarity. Gogol traces in some detail the development of particularist working class organization, from mutual aid groups through the Clubs of revolutionary France to the Soviets and Workers’ Committees of the Russian Revolution. But he pays no attention whatsoever to the development of the societal forms of organization which instantiate the Universal: the mass movements, national trade unions, the International, the Commune (the universal character of these last being conflated with the particularism of the base), the Parties of the Second International, the Soviet Government, the Fronts – both Popular and United – not to mention the post-War forms: national liberation fronts, the new social movements, identity politics, alliance politics, subscription organizations and so on. Perhaps these are taken as essentially elitist? But as Gogol demonstrates in relation to Spain, without the aid of a Soviet government of some form, workers’ Councils and Committees are doomed to defeat.

For example, the First International was constructed as a mutual aid organization uniting trades councils, strike committees, worker education societies and so on, each of which had in itself a very particular project and was bound together by person-to-person ties. Nonetheless, the International clearly and quite explicitly transcended that particularism, becoming the first genuine world-wide socialist organization. This dissonance between the Particularism of the base organizations (often including Individuals who were downright reactionary) and the revolutionary-political Universalism of the whole is critical. And it is archetypical for what Hegel took for the development of a new concept.

Further, Gogol pays little heed to the social conditions in which the workers enacting these forms of organization lived. Why did the Tolpuddle Martyrs organize in secret? Do we expect Soviets to spring into existence in present-day London? Why were socialist political parties formed in the 1890s and not in the 1840s but are unelectable in Europe today? The various forms of organization produced by the struggle against capitalism over the past 200 years are in great measure a response to the possibilities offered by social conditions.

Gogol makes frequent reference to the content of organization being the focus and not the form of organization, but he does not make completely clear what he means by content. For Hegel, Form and Content are in continuous unity and conflict with one another as Content seeks for an adequate Form and Form discloses new Content. So it is hardly possible to treat of Form separately from Content. In Marxist parlance, “content” usually means the interconnectedness of a formation, so in that sense I would take content to mean precisely the Universal which can only show itself on the societal scale through the connecting up of diverse Particulars. Or perhaps we can see content in the dominant social conditions to which a movement is responding? Either way, it seems to me that it is precisely content that Gogol has missed.

This does not take away from the fact that Gogol has made a start in this project which is, in any case, surely more than one person can encompass. Hegel would agree. Consider this passage from the Introduction to his Philosophy of Right:

The theoretical is essentially contained in the practical. Against the idea that the two are separate runs the fact that man has no will without intelligence. The will holds within itself the theoretical, the will determines itself, and this determination is in the first instance internal. That which I will I place before my mind, and it is an object for me. … man cannot use his theoretic faculty or think without will, for in thinking we are active. The content of what is thought receives, indeed, the form of something existing, but this existence is occasioned by our activity and by it, established. These distinctions of theoretical and practical are inseparable; they are one and the same; and in every activity, whether of thought or will, both these elements are found (1896 §4 addition).

I find it strange that Gogol has no interest in this book, where Hegel develops the method of the Logic explicitly as a social and political theory, albeit after the Owl of Minerva has taken flight. Dunayevskaya/Gogol are in illustrious company in skipping over the Philosophy of Nature, but the oft-repeated claim that “Nature” can be translated as “practice” is quite wrong. The whole point of the concept of Nature is that it is not human practice, just as the whole point of Hegel’s Logic, however obscure, is the inseparability of thinking from practice.

Dunayevskaya was very active in the Women’s and Civil Rights movements and wrote a great deal on these struggles. Hopefully, Gogol will continue his work in a study of the particularist forms of these great movements, closer to the spirit of our times. But we cannot bypass the community-wide forms of association which are necessary to instantiate a new universal idea. It is no wonder that the various forms of association which have been used to create national and international forces have proved to be problematic. Were this not so we would be living today the identical subject-object of the Absolute Idea. Hopefully, Gogol will address the connection of immediate, particularist forms of association with the unfolding social conditions and developments on the plane of national political life as well.