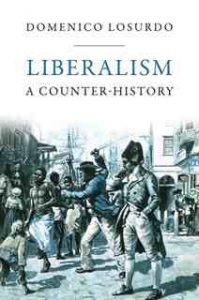 Liberalism: A Counter History is Domenico Losurdo’s trenchant analysis of the question what is Liberalism in its historical development and who may we consider to be a Liberal? Without very serious reflection few people would contest that George Washington, Thomas Jefferson, Adam Smith, John Locke, Thomas Paine, Alexis de Tocqueville, to name but a few, are both Liberals, and worthy of the designation. Losurdo however demonstrates that the classical Liberals we learned about in school are in fact separated by huge gulfs in their philosophical views and political practice. Moreover, what frequently unites them in practice is more their tolerance and often cheerful willingness in implementing certain forms of severe oppression (e.g., indigenous genocides, slavery, work labor camps). At the end of Losurdo’s masterful condemnation, the theory of Liberalism, which we have come to take for granted, and the founders who we assume with equal certainty to be embodying some particular philosophy, are left with only the most tenuous of connections to any set of pristine principles regarding the Liberty of man.

Losurdo opens his work admitting that even posing his question is somewhat ‘embarrassing’; the knee-jerk response is that Liberalism has always been the philosophic-politico tradition concerned with the Liberty of the individual. Yet the dawn of Liberalism on either side of the Atlantic, as best expressed by the writings of Locke, Grotius, Franklin, and Smith, were conjoined to, and involved in, ‘a process of systematic expropriation and practical genocide first of the Irish and then of the Indians’, not to mention the rapid rise of ‘black enslavement and the black slave trade’ (20).This simultaneous birth, which in itself is a politico-historical contradiction, also has deep seated philosophical contradictions. Whereas Grotius ‘affirmed’ slavery ‘without the least reticence’, Locke’s ‘legitimation of slavery’ is only perceptible between the lines of his written works (26-7). Both are historically considered Liberals, but the connection is now more tenuous than first appeared. And as Losurdo’s shrewd analysis shows, slavery was not an institution that unfortunately was grandfathered into the birth of Liberalism, instead slavery engendered its maximum development based upon the success of Liberal revolutions.

A general theme is consistent throughout Losurdo’s book. Each chapter takes a historical moment (e.g., French Revolution, Glorious Revolution, San Domingo Revolution), and points out the contradiction between several elements: philosophy, political practices, and important thinkers of the time. Liberalism as a philosophy and political practice are then juxtaposed to the ideas of certain Liberal thinkers, leading to the usual conclusion that what is common to all is often some support of oppression and not personal Liberty. Isaiah Berlin, as Losurdo points out, gave us the strong dichotomy between Positive and Negative Liberty. No one would doubt that slaves and victims of genocide are not exercising Positive Liberty. Strangely though, even advocates of Negative Liberty are often themselves not capable of exercising it due to their own tyrannical legislation. For instance, a common theme in the Liberal tradition was tantamount to eugenic breeding, that is, Liberal’s thought that breeding with the oppressed was to mix the superior with the inferior race. As Benjamin Franklin said to a doctor ‘Half the Lives you save are not worth saving, as being useless; and almost the other Half ought not to be sav’d, as being mischievous’, he goes on to condemn the doctor for declaring war on the ‘Plan of Providence’ (115). As a result of such horrifying views, members of the higher classes that may desire to marry or educate those seen as ‘useless’ and ‘mischievous’ were denied their Negative Liberty by their class’s own standards. This attitude led to a snowballing effect of how a slave or servant could be treated legally, even when the owner of said slave desired to treat his ‘property’ differently than the law commanded (e.g., slave owners who were disbarred from teaching their slaves to read). If the slave is property, by the Liberal standard, then this is most assuredly an infringement upon Negative Liberty.

Reverse oppression carries over into other areas besides Negative Liberty. For instance, Losurdo presents in alarming detail the degree to which ‘white slavery’ was rampant in Liberal societies. During the process of colonization, stricter penal codes and forced labor camps grew in tandem. But the penal code, initially intended to force labor upon the colonized, began to reverberate back upon whites. Forced labor and indentured servitude, of both slaves and now whites, became staples of the economy of colonizing nations; both in conquering, and conquered, states. In an eerily Orwellian spin, Liberal’s tried to say that indentured servitude did not so much deny Liberty, as embody it. Since agreed upon contracts are a staple of Liberal society, and servant and master enter into a contractual relation, the servant is exercising Liberty, according to Emmanuel Joseph Sieyès: “in the way most opportune to him”. Moreover, the servant is “receiving more than what he gives up” (82). As with Negative Liberty, Liberals have jettisoned Positive Liberty amongst the white race too.

Liberals might be inclined to disregard Losurdo’s work as bombastic and hyperbolic, but they would be exercising poor judgment to do so. Although a few references are to the works of Marx and other critics of Liberalism, the primary sources of Losurdo’s works are historical documents, the writings of Liberals, and scholarly texts on Liberal history. This is not revisionist history, but history told from the point of view of those who are making it. Almost each page of Losurdo’s work contains at least half a dozen footnotes from either contemporary scholarly research or the works of Liberals from the period he is analyzing. Of course this has its downside too. The footnotes can be rather jarring when you are trying to determine if the just cited sentence came from an actual Liberal or a recent historian, and at times they can make you wonder how much of Losurdo’s work is unique, and not just repetition. Nonetheless, the constant reminder of the sheer number of sources Losurdo has used to drive home his thesis is constant testament to the labor embodied in Losurdo’s writing.

But hia thesis itself remains somewhat confusing. Losurdo is essentially posing a philosophical question: what is Liberalism and who can we say belongs to its ranks? But the answer he gives in each chapter is less a philosophical one than an intricate empirical analysis of historical facts. The book sits atop a fence between philosophy and history, without being enough of one (philosophy) and too much of the other (history). After all Losurdo is an accomplished scholar on Hegel and Marx, not to mention an accomplished philosopher, but primarily this book reads as history, with a pinch of unanswered philosophical questioning peppered throughout. Perhaps that is Losurdo’s point, the fluidity of the Liberal philosophy, and its representatives, leads to the impossibility of a solid conclusion regarding the primary question of his research. But that too is a rather philosophical position that requires more elaboration than Losurdo has given us.

Without detracting too much from Losurdo’s accomplishment, another criticism needs to be considered. The structure of the book is often erratic and confusing. A chapter might begin with a question e.g., who was a Liberal in the French Revolution, and end with a summary of Christian Radicalism during American Industrialization. The connection between the introduction, and the conclusion, is often tenuous. To name one more example, during the middle of a discussion regarding the French Revolution, an unexpected detour is taken into Bolivar’s campaigns throughout Latin America. The reader will thus learn copious amounts of history, but at the end of many chapters will be left wondering how to tie it all together. And in this regard, the condemnation of Liberalism can seem a little helter-skelter.

Nonetheless, Losurdo’s historical account is as horrifying as it is vigorous. Radicals and Socialists have long known that the birth pangs of Liberalism have been bloody, authoritarian and hypocritical. He has offered compelling research to attest to our suspicions and he leaves no room for serious rebuttal. If one still wants to declare themselves a Liberal after reading this, they have a serious hurdle to face: their own philosophies genesis. As Losurdo has demonstrated, Liberalism is not Liberty for the individual in the positive or negative sense; it began, and continues to be, a fluid ideological defense for those in power to justify their positions of power.