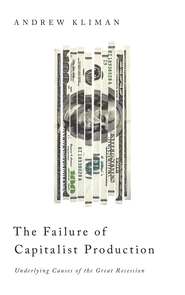 Andrew Kliman
The Failure of Capitalist Production: Underlying Causes of the Great Recession

The Failure of Capitalist Production is an attempt by the American Marxist economist Andrew Kliman to trace the cause(s) of the ‘great recession’ that has gripped the world economy since the collapse of Lehman Brothers in 2008. For Kliman, it is with reference to Marx’s Law of the Tendential Fall in the Rate of Profit (LTFRP) that the current crisis is explicable.

The LTFRP is developed by Marx in volume three of Capital. The law comes out of the Labour Theory of Value and labour’s unique position (as opposed to capital) of being productive of value. As industry develops, and machines constitute a rising proportion relative to human labour in the total capital, ‘the rate of surplus-value, with the level of exploitation of labour remaining the same or even rising, is expressed in a steadily falling rate of profit’ (Marx, Capital Vol. III, Chapter 14). Part Three of the book is dedicated to the Law, and it is important to note that Marx devotes a lot of space to enumerating the ‘countervailing factors’ to the full expression of the Law. Nevertheless, the Law is an important part of Marx’s analysis of capitalism.

Kliman sees his view as controversial because it flies in the face of the received wisdom of the ‘neoliberal’ school of Marxist economists, who, Kliman says, argue that capitalism restored its profitability through economic and political reforms in the 1980s. For these thinkers, Kliman says, the crisis is ‘irreducibly financial’ (6), and is therefore not a crisis of capitalism at all, but instead one of a specific kind of deregulated or ‘irresponsible’ capitalism. Such a critique, Kliman is correct to point out, does not amount to a critique of capitalism at all and is very similar to calls for a more ‘humane’ or ‘responsible’ capitalism.

The Failure of Capitalist Production is, in Kliman’s words, an ‘empirical analysis, not a theoretical work’ (9). This means that the author is purporting to offer an objective argument which only looks at the relevant statistical data. Of course, the question of what is relevant is something that Kliman’s opponents take issue with.

There are a number of limitations to this book, some of which Kliman is aware of. Firstly, even if we accept Kliman’s central contention – that the rate of profit has fallen and that this is the main cause of the current crisis – Kliman’s data is only for the USA and at best, similar conclusions may be correct for parts of Western Europe. Here we come across one of the weaknesses of the book – its ignorance of real developments in human society and between societies in the period in question. For example, there is no discussion of globalisation, and Kliman argues for excluding China from the global growth rate because it is an anomaly (53). Furthermore there is no analysis of the collapse of the USSR, which is dismissed as just another form of capitalism anyway, or of how the opening of that market may have acted as a countertendency to the fall in the rate of profit, or how the restoration of capitalism in the USSR precipitated a massive contraction in the Soviet economy.

Kliman states that `U.S. workers are not being paid less in real terms than they were paid decades ago. Their real pay has risen. And their share of the nation’s income has not fallen. It is higher now than it was in 1960, and it has been stable since 1970.’ (6)

We also learn that wages have been replaced by non-wage benefits such as healthcare, education and perhaps credit cards. Kliman maintains this in the face of even mainstream economists’ acceptance of the growth of inequality, the language of the 99%, and the decline in things like trade union membership, labour rights, the growth of underemployment and casualization. Again, even if we accept the extremely dubious claim that American workers had, until the crash of 2007, never had it so good, we should, as Marxists, understand that the economy is global, and that the vast majority of the global proletariat do not have access to such luxuries as welfare, consumer credit, hire purchase or ‘sub-prime’ mortgages.

A quick internet search for ‘labour share of income USA’ also pulls up a lot of articles from mainstream economists who recognise the existence of this trend. In a recent New York Times article, Paul Krugman has even belatedly become aware of it. I bring this up just to show that it is not just the ‘conventional left’ who are aware of labour’s worsening position relative to capital in the past thirty years.

Kliman’s measure of profit is also somewhat dubious. Kliman calls it the ‘property-income’ rate of profit and says it is:

much closer to what Marx meant by “surplus value”. It counts as profit all of the output (net value added) of corporations that their employees do not receive. In addition to the before-tax profits of corporations, it includes the moneys spent to make interest payments and transfer payments (fines, court settlements, gift contributions, and so on), to pay sales and property taxes, and other minor items (75-6).

But the problem with this measure is that it includes Kliman’s aforementioned ‘social wage’ that the state pays to the worker under the heading ‘profit’. The cost of doing business, tax, court fees, patent applications and so on, all come under profit. It is highly unlikely that the capitalist class sees it this way. In Britain, the incessant bleating of the employers’ federation, the CBI, suggests that anything that does not show up as a credit in a business’s bank account must instead be a debit.

Of course, Marxists have a theory of the capitalist state – that it is ‘the executive committee of the bourgeoisie’ – but the fact that the state under capitalism acts to support the bourgeoisie does not mean that it is identical with it. To be sure, capitalists can be a short-sighted bunch, and it is often in their own interests that the state administers their business – if it wasn’t for the state, they would produce their own gravediggers in a much shorter period of time. However the state also provides things for workers that have been won through class struggle. There is no mention of class struggle, or the changing political power of the working class throughout Kliman’s book.

The biggest problem with Kliman’s work is what he sees as its strength – its ‘empirical’ non-theoretical nature. The LTFRP seems to be a good account of the development of capitalism. Although it is debateable whether or not the rate of profit continued to fall or recovered after the 1970s (and Kliman has made an interesting contribution to the argument here), the fact that post-war capitalism is in a slow decline is unarguable. The cause of the current crisis being the exhaustion of all suitable markets and availability for capitalism to turn a profit, even at a rate relatively meagre when compared to the halcyon days of the nineteenth century. If a new opportunity opened up for world capitalism would capital turn its nose up if the rate of profit was too low? One suspects that instead capitalists would jump at the chance of a new avenue for expansion: a new market, the chance to accumulate more capital, to develop new technologies, perhaps a new territory to alleviate the pressure cooker of class struggle spreading through the world – these would all represent a new lease of life for capital, even at a relatively low rate of profit.

Throughout history, there have been cases like this. Did the Robber Barons sniff at the railroad? Why did British textiles capitalists bother to reinvest in greater productive capacity? Of course there was the imperative pressure of competition, but it is still noteworthy that capitalism expanded with all its productive might when it could, when new opportunities presented themselves, or were conceded at the barrel of a gun.

When Marx propounds the LTFRP in volume three of Capital, he also points out that ‘the more productiveness develops, the more it finds itself at variance with the narrow basis on which the conditions of consumption rest’ (Marx, Capital Vol. III, Chapter 15). Later in the same book Marx writes that `The ultimate reason for all real crises always remains the poverty and restricted consumption of the masses as opposed to the drive of capitalist production to develop the productive forces as though only the absolute consuming power of society constituted their limit.’ (Marx, Capital Vol. III, Chapter 30)

Kliman opposes himself to the quasi-Keynesian underconsumptionism of Paul Sweezy, but Sweezy’s view does not stand up to much criticism, and it is capitalism’s tendency towards overproduction (not underconsumption) that many Marxists point to as the general predictor of capitalist crisis. This view – which does not position itself as the magic formula for predicting crisis – is not seriously considered by Kliman, and it should be. It is in overproduction – the tendency to push beyond the limits of the market – that Marx locates the basic contradiction of capitalism.

The Failure of Capitalist Production does have its strong points: in particular the chapter on the 1970s, not the 1980s, as starting point of the current crisis is a good counter to the ‘neoliberal’ argument, but even Kliman’s own graphs don’t obviously support his conclusion that the U.S. economy was stagnating from the 1970s onwards. For example, Figure 4.4 ‘Growth Rate of Industrial Production U.S. (percentage change during prior decade)’ (55) shows that the growth rate recovered in the mid to late 1980s and never hit the depths of the 1981 recession. Whilst Kliman clearly shows that there has been a long term decline in the rate of profit since the end of World War Two, The Failure of Capitalist Production doesn’t convincingly show that there was a rebound in the 1980s and 90s – even if this rebound wasn’t sustained (is any capitalist rebound ‘sustained’ anyway?).

Overall, The Failure of Capitalist Production puts forward an interesting thesis which makes a real contribution to our understanding of the crisis, not least in its collection and interpretation of data for the U.S. economy. However, it does not offer compelling arguments for the reader to accept its rather extraordinary conclusion – that capitalist production has failed because of the LTFRP. The reason for the limitations of The Failure of Capitalist Production is, I think, due to its tendency to abstract from the real world which includes countervailing tendencies in politics, international relations, globalisation, the collapse of the USSR, and the contortions that capitalism performs in order to overcome its own barriers, but which return in the shape of greater crises.