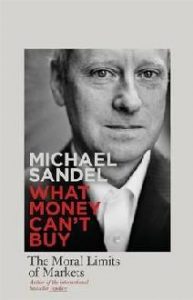 Michael Sandel rose to prominence in the 1980s as a leading critic of Rawlsian liberalism. Lately, he has gained wider recognition: in a recent series of radio debates he was styled as the ‘Public Philosopher’. His Harvard University classes are shown on television, he has given the BBC Reith lectures, and his last book Justice (2009) was an international bestseller. Based on his Harvard undergraduate course, Justice was something of a pedagogical tour de force, explaining Kant, Mill, Aristotle, and others in simple terms without sacrificing complexity or insight.

What Money Can’t Buy continues in the same vein, and like Justice it is intelligent, readable, and stimulating. Accessible to a broad audience and yet offering a carefully constructed and rigorous argument, it applies Sandel’s thinking to one particular issue – namely, the ways in which markets and market values have come to rule our lives. We live in an era, Sandel claims, of ‘market triumphalism’ (6) in which almost everything is for sale. His target is not the market economy as such: he claims that markets have proved the most successful mechanism we have for the production and distribution of goods (5). The problem for Sandel is the increasing spread and reach of markets into all areas of life: the way in which we have ‘drifted from having a market economy to being a market society.’ (10) This is a world in which markets have penetrated almost all areas of life: ‘family life, friendship, sex, procreation, health, education, nature, art, citizenship, sports’ (202).

Sandel offers numerous case studies and examples (mostly American, occasionally British) in order analyse various aspects of this accelerating marketisation. Many of his examples are disturbing or depressing: he writes, for instance, of a growing market in death, in which traders in effect bet on people’s deaths by buying up their life insurance (161). The supermarket giant Walmart made themselves US$300,000 in this way after one their employees dropped dead on the job (131). Other examples are so jaw-dropping that they are funny: a couple who put the right to name their baby up for sale on eBay (187). And in Sandel’s hands even the most unsettling cases can appear drily humorous: it is not often that one opens a book of political philosophy to find the claim that ‘there is something morally disagreeable about the market in walrus killing’ (84). The number and range of examples collated by Sandel reinforce his case by demonstrating the extent to which markets have come to dominate our lives. They also have a pedagogical use, enlivening and illuminating his philosophical arguments. Nonetheless, the sheer number of cases studies can be wearing – do we really need eight examples over twelve pages to explain the concept of paying to jump a queue? It does also begin to feel like the examples are simply there to fill space, given that Sandel’s basic argument is so straightforward that he has more or less explained it in full by the time he reaches the end of his Introduction.

He considers two objections to markets. The first concerns fairness and coercion: it asks whether a market exchange is genuinely voluntary if it takes place under conditions of unfairness and inequality. If someone sells his own kidney in order to feed his starving family, for example, has he really acted freely (111)? Is the exchange truly voluntary, or is one of the exchangers in effect coerced into action? Sandel does not reject this fairness argument, but he considers it inadequate: it objects not so much to the use of market mechanisms as to the conditions under which they are used. In effect, therefore, this is a contingent objection: it could not object to a market in kidneys in a society in which the conditions of exchange were fair.

Sandel is more interested in a second argument, this time concerning corruption: treating a good or practice as a commodity risks corroding or degrading its meaning. Market mechanisms are appropriate for the distribution of some goods but not others. How should we decide which goods can be bought and sold on the market? As in Justice, Sandel reaches an Aristotelian conclusion in which we apply a teleological test: ‘we have to figure out the purpose of the social institution [or good or practice] in question and the norms that should govern it.’ (68) For example, Sandel highlights the ways in which American schools have become more and more commercialised, with books and other educational materials provided by corporations, school playing fields and sciences labs sponsored by local businesses, and even advertisements on pupils’ report cards – in one Florida school, students with a high number of As and Bs on their card were rewarded with a free McDonald’s Happy Meal. For Sandel, the problem here is not simply that the involvement of corporations distorts the educational mission with bias and misinformation (it is unlikely that a textbook on nutrition distributed by McDonald’s will be wholly impartial). The problem is that such rampant commercialisation ‘is at odds with the purpose of schools…. The purpose of advertising is to recruit consumers; the purpose of public schools is to cultivate citizens.’ (200)

Sandel presents this argument about corruption as a riposte to conventional economic wisdom. Economics, he suggests, teaches us that the market is value-neutral: markets merely allocate goods according to people’s preferences, without judging those preferences. If this is true, then markets cannot ‘corrupt’ goods: they can only distribute them more or less efficiently. Sandel argues not simply that this position is inadequate – because ‘market reasoning is incomplete without moral reasoning’ (81) – but that it is implausible: far from being morally neutral, ‘markets reflect and promote certain norms, certain ways of valuing the goods they exchange.’ (78) Commodifying a good changes the meaning of the good and our relationship to it, and can undermine valuable norms and attitudes. It is for this reason, Sandel argues, that marketisation can often backfire and reduce rather than encourage desired behaviour: financial incentives can ‘crowd out’ people’s existing motivations and obligations (122).

The target of Sandel’s argument, then, is not simply the extension of markets into all areas of life, but the forms of thinking that have justified and facilitated this extension: the way in which the discipline of economics itself has claimed dominion over all areas of life. Economics, Sandel notes, used to deal with a relatively restricted range of subjects: unemployment, inflation, wages, prices, etc. Today, in contrast, it has awarded itself a much grander task, claiming to be the science of human behaviour in general. In some senses it is this change of thinking that is Sandel’s real target: What Money Can’t Buy could easily be subtitled A Critique of Economic Reason.

This assault on the pretensions of mainstream economics is welcome, but it is also part of the problem with Sandel’s book: he fights his battle largely on the level of ideas and values. Indeed, at times it can seem as if he is attributing the spread of markets solely to the ambitions of academic economists. For example, he notes that in the mid-1980s an economist named Julian L. Simon proposed selling the right to immigrate to the USA – and that by 1990 Congress had in effect made this proposal law, allowing entry to foreigners willing to invest US$500,000 in the country (62). But if we are to understand how a market in migration can develop then we need to look beyond the speculative plans of professional economists and instead analyse patterns of international trade and development, the globalised labour market, state-corporate power, and so on. In other words, we have to start discussing something that Sandel does not even mention: capitalism.

This reluctance to use the ‘c’ word has other consequences: Sandel not only fails to interrogate the causes of growing marketisation, he also ignores many of its most pernicious effects. He does not seem interested in the labour market: the exchange between employee and employer, or worker and capitalist, goes unremarked. Other than a passing reference to school teachers who are financially rewarded for improving grades (53-4), he does not examine the growth of market logic in the workplace (the rise of competition and incentives, widening pay differentials, performance management, erosion of workers’ rights).

Instead of these questions of power and ownership, Sandel focuses on values: ‘markets’ are always paired with ‘market values’, and what they undermine are traditional or existing values. There is thus something of the ‘Red Tory’ about Sandel, bemoaning the loss of traditional forms of life and morality. This strong element of nostalgia is especially evident in the final chapter, which opens with Sandel reminiscing about his childhood support for the Minnesota Twins, a baseball team who today play in a stadium named after a discount retailer. The problem with nostalgia is that it tends to venerate the past simply because it is the past. Sandel is correct to claim that markets have undermined all kinds of values and practices – but why does this matter? In many cases, it can and should be welcomed. Traditional or existing norms and values are not in themselves good: they can be prejudicial, restrictive, or intolerant. To put it crudely, markets are useful for eroding oppressive norms: they don’t care about your gender, sexuality, or ethnicity, as long as you have the ability to pay (or something to sell).

Sandel acknowledges that markets in themselves are neither good nor bad, and that there is disagreement about the right ways to value different practices and institutions. This, he argues, is why we need public debate and deliberation about the moral limits of markets. But is a change in the terms of our debate enough to resist or control marketisation? Sandel himself inadvertently gives us reasons to doubt that a reinvigorated public discourse alone can reverse the market tide: aspects of his working life could easily be used as case studies in his own book. He delivers his lectures, after all, at a university that charges undergraduates almost US$60,000 a year. Those not keen on Harvard’s high fees can access Sandel’s lectures for free on the ‘Justice’ website (along with details of his tour schedule and links to his Facebook page: http://www.justiceharvard.org). Somewhat surprisingly, however, each video lecture opens with a message thanking the programme’s funders, who include The Goldman Sachs Foundation and Pom Wonderful Pomegranate Juice (‘100% Pure’).

The point here is not that Sandel is a hypocrite (he is not responsible for Harvard’s extortionate tuition fees, or for the sponsorship of his own lectures): the point is that even those with the most morally unimpeachable intentions can find themselves undermined by markets if they rely on values and ideas as their only form of resistance. If challenging markets involves merely extending and enriching public debate, then why is the Public Philosopher himself for sale?