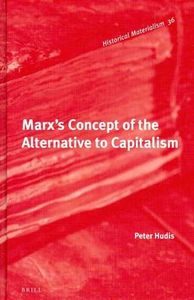 Peter Hudis
Marx´s Concept of the Alternative to Capitalism

The pressure to provide a vision of an alternative to capitalism is keenly felt by many of those who condemn it. This is particularly the case for Marxists, who find themselves confronted with the fact that Marx, seemingly deliberately, said very little about an alternative himself. Peter Hudis believes that Marxists can and should take up this challenge, and he argues in this book that it is possible, and urgently necessary, to draw out a conception of an alternative in Marx’s writings, and to use it as a basis to develop a clearer alternative. Drawing on a wealth of material, much of which is overlooked by other commentators, he begins the work of uncovering this conception. However, whilst he makes a convincing and clear case for the presence of the outlines of such an alternative, Hudis is both too optimistic about how specific this alternative might be, and too pessimistic in accepting that an adequate critique of capitalism depends on such a specific alternative.

A particular strength of Hudis’s book is that it examines the full sweep of Marx’s writings, rather than focus on one particular text or period of Marx’s life. No stone is left unturned in attempting to uncover the implicit conception of an alternative. The scope of this allows him to include a number of texts which are often overlooked in this discussion, and offer a number of novel interpretations of works usually discussed in different contexts. As part of this the book contains as an appendix a new translation of Marx’s Excerpt-Notes on the ‘Absolute Knowledge’ chapter of Hegel’s Phenomenology of Spirit. These, Hudis argues, provide evidence for a distinctive reading of the Economic and Philosophical Manuscripts as underpinned by a concept of an alternative to capitalism: “Marx’s intense focus on Hegel’s concept of self-movement through second negativity leads him to posit a vision of a new society that surpasses the limitations of other radicals on the scene at the time” (72).

Hudis traces a number of consistent themes which appear in Marx’s early writings and are never abandoned. The thread running through this is a forceful opposition to situations in which human individuals become dominated by social relations and products of their own making: “Marx’s critique of capital is part of a complex argument directed against all social phenomena that take on a life of their own and dictate the behaviour and actions of the social agents that are responsible for creating them” (207). A central theme here is the criticism of a false inversion of subject and predicate which Marx refers to, in his early writings, as a form of madness. This critique of an error of reasoning gains normative significance for Marx when applied to a human society in which the products of human action come to dominate the subjects that produce them. (There is a slight ambiguity, never entirely resolved, about whether the normative significance comes from the logical error, or rather the unfreedom involved in domination itself. I suspect the latter is a more defensible position.)

Marx’s alternative to capitalism, then, is one motivated by a concern to end the dominance of humans by abstractions. This can only be achieved through a structure in which human beings organise society consciously, and in which social relations become transparent. Crucially, this involves the transcendence of value as determined by socially-necessary labour time, which is the central abstraction which dominates life under capitalism. In a section distinguished by its lucid and able treatment of what is often extremely complex material, Hudis argues, plausibly, that Marx never suggested that a post-capitalist society ought to be governed by value determined by socially-necessary labour time, rather merely that its early phases would be characterised by value determined by actual labour time.

Hudis clearly intends his work to be a sort of preparatory piece or groundwork for future development. Twice he refers to Marx’s work containing the “contours” (4, 101) of an alternative to capitalism, and clearly believes that within these contours a “specific alternative” (a term he uses frequently, alongside “specific conception”) is both possible and “of great importance” (5). This, I think, is mistaken. It is not that we can or ought to say nothing about a post-capitalist society. Hudis’ work is excellent proof that we can. However, I am significantly more sceptical about how much we are able to say, and about how much we ought to be required to say.

What is at stake is how specific an alternative ought to be. This, I want to suggest, is not just a semantic or intellectual quibble, but one of real importance to the questions that Hudis addresses. Hudis repeatedly refers to the need for a specific conception of an alternative to capitalism, and that implicit in Marx’s criticism of capitalism is just such a specific conception. Yet how specific is specific? How much detail must we go into? How much detail can we go into? Do we specify rules of distributive justice, or detailed institutional structures and mechanisms? I want to argue that the answer to the question of how much detail we go into is ‘not very much’, and certainly may end up falling well short of what certain interlocutors demand. Rather than any specific conception, contours might be the best we can hope for, and the most we can expect.

The reason for this can be found in the fact, which Hudis rightly notes, that “Marx opposes any tendency to project a vision of a postcapitalist society that comes out of the theoretician’s own head, independent of the struggles of the proletariat” (84). Hudis acknowledges that this condition, motivated by Marx’s concern for self-emancipation, places restrictions on the manner in which one can posit a conception of the alternative to capitalism. Yet it also, it seems to me, imposes a restriction on the conception itself. Loosely, the more specific a conception, the more we fill in the space between the contours, the more likely we are to create an image separate from the struggles of the proletariat, which ends up being imposed upon them. Furthermore, the more we attempt to fill in this space, the more likely we are to fill it with intellectual concepts not rooted in any alternative, but rooted in capitalism itself.

If the actual struggles of the proletariat impose a restriction on the degree of specification of an alternative, then that alternative is likely to wax and wane with those struggles. It is a strength of Hudis’ interpretation that he locates shifts in Marx’s philosophical position not in moments of inspiration or genius, but in the ups and downs of political struggles through his lifetime, with the Paris Commune given particular significance in shaping his views (183-7). Yet the significance of this is underplayed. For example, Hudis notes that:

What is most striking about Marx’s discussion [of commodity-fetishism] is the suggestion that it is impossible to penetrate through the mystified veil of commodity-fetishism unless the critique of capitalist value-production is made from the standpoint of its transcendence. The fact that the section on commodity-fetishism was finalised only after the experience of the 1871 Paris Commune … suggests the importance of analysing the present from the vantage point of the future. (160)

However, the Paris Commune was not ‘the vantage-point of the future’ but precisely a vantage-point in the present. It was not the standpoint of having transcended capitalism, but a standpoint within capitalism which also helped point beyond it. Yet before the commune, such a standpoint was not available. With this in mind, we can legitimately question whether Hudis lives up to his own demand that “hard and continuous theoretical and philosophical labour that is rooted in, but not reducible to, the consciousness of the oppressed, is needed to help bring forth a conceptual alternative” (81). This hard theoretical labour will only be as creative and successful as the struggles it is rooted in; it is the depth, breadth and ultimately success of these struggles themselves that will furnish the theoretical resources for the alternative.

In this context, it is worth remembering Marx’s definition of revolutionary practice as the “coincidence of the changing of circumstances and of human activity or self-changing”. It is this coincidence of social transformation and transformation of consciousness which is likely to provide the kind of detail that Hudis is looking for. To stress again, this does not mean we can say nothing about the future except in periods of heightened class struggle and revolution, merely to say that unless that struggle is successful, we cannot know more than the contours of the alternative. The task of filling in the space between the contours in thought goes hand in hand with the task of building the alternative in reality. Nor does it mean we cannot condemn capitalism at all. We should not accept the claim that we cannot criticise capitalism without a detailed alternative. It is enough to point to capitalism’s many ills, and to remind people of the powerful point that “Another World Is Possible”, without presenting every dot and comma of that world.

In as much as his writings are directed to, and clearly rooted, in “the emergence of a global justice movement over the past two decades, which has called attention to the economic inequality, social instability and environmental destruction that have accompanied the global expansion of capitalism” (1) Hudis is on the right track. However, his demands for specifics seem to me misplaced, and potentially misleading.