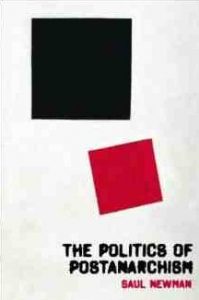 Saul Newman proposes postanarchism as the heading under which classical anarchism might once more be inherited and re-articulated in relation to contemporary political theory as ‘the horizon of radical politics today’ (14). He offers a highly readable introduction to the political theory of classical anarchism and some points of theoretical contention between anarchism and marxism. Newman’s thesis attempts to shift contemporary left political theory – Chantal Mouffe and Ernesto Laclau, Michael Hardt and Antonio Negri, Alan Badiou and Jacques Rancière – away from the state and in the direction of a post-anarchist thinking of politics. He also pursues a positive conjunction of anarchism and ‘postmodernism/poststructuralism’ (13), following and expanding on the work in this area by Todd May, Lewis Call and Simon Critchley in the face of the scepticism from Murray Bookchin and John Zerzan.

Newman’s first chapter offers an introduction to some of the key tenets in the political theory of classical anarchism. He defines classical anarchism as opposing the idea of the state with the radical idea of equal-liberty. The idea of equal-liberty is derived from classical liberalism; Newman cites Herbert Spencer’s law of equal freedom (21), but is said to depart radically from the liberal theory of the state as the desirable or necessary means of accomplishing this equal-liberty.

[T]here is a division between a kind of organic natural order – which is fundamental to society – and an artificial political order – the order of power, political institutions, laws and so on – that is alien and hostile to society. This natural order is rational and contains the foundations of morality; the order of political power, on the other hand, is violent, irrational and immoral. […] Classical anarchism can therefore be described as an anti-politics. (36-7)

Newman states that classical anarchism is an anti-politics because it opposes the ‘political principle’ with the ‘social principle’ (36). Expanding on this, Newman writes that anarchists ‘call into question the principle of state sovereignty and refuse to see participation in formal structures [of] political power as a means of achieving social change.’ (37) This anti-politics is tied to the revolutionary and utopian desire for radical equal-liberty in classical anarchism.

Newman introduces his more philosophical concerns under the heading of a postanarchist ontology in the second chapter. His touchstones are Derrida, Foucault, Lacan and Lyotard as he writes of the limitations of the enlightenment discourse of classical anarchism; of its foundationalism, essentialism, humanism and rationalism. Newman does not oppose postanarchism to classical anarchism per se but attempts to preserve the radical and revolutionary commitments of classical anarchism while interrogating what he sees as the limits of the enlightenment framework within which these tenets have been articulated. Newman writes that:

To unpack the Enlightenment, to explore its limits, is … not to jettison it but to radicalise it. In the same way, to interrogate the Enlightenment foundations of anarchist thought, to explore the limits of its humanism and rationalism, is not to abandon anarchism or even to transcend it – it is rather to move within it, being faithful to it, but to expand its terms and radicalise its possibilities. (48)

Newman rejects the opposition he had identified in classical anarchism between a natural, ethical, society and an artificial, immoral, state. At the same time he preserves something of the distance from the state that is already explicit in such an opposition in order to argue that postanarchism is a ‘politics of anti-politics’ (68ff). By this he means the displacement of the state as the central locus of the political field. This thesis gains traction to the extent that the state remains the locus of the political field within contemporary left political theory. Chantal Mouffe and Slavoj Žižek will form something of a foil to Newman’s thesis in this respect.

Newman’s third chapter departs from the split in the First International between followers of Bakunin and Marx in order to note some of the theoretical differences between anarchism and marxism. Newman writes that anarchists recognise political power as a separate mode of oppression and reject the marxist reduction of the state to ‘a mechanism of class interest and domination’ (76). He argues that ‘Marx ignores the way that the state itself, as a structure of domination and sovereignty, has its own specific logic of self-perpetuation and expansion which is above and beyond class interests.’ (77) This means that anarchists reject the marxist/leninist notion of a transitional state, where the state apparatus is appropriated from bourgeois control by a revolutionary vanguard in order to further the revolution. Rejection of the transitional state is combined with rejection of the revolutionary party that, Newman here quoting Bookchin, ‘is structured along hierarchical lines that reflect the very society it professes to oppose‘ (85). Newman warns against ‘the trap of political power’ (84) and writes in favour of the ‘spontaneous self-organisation of the masses’ (85).

Newman’s book comes into its own when he moves beyond the anarchist critique of classical marxism towards more contemporary left political theory. There he begins to find more commonality between anarchism and marxism, such as in Negri’s emphasis on autonomy (87). Newman’s critical engagement with the postmarxism of Laclau and Mouffe in this section is one of the highlights of the book. Newman recognises the importance and value of their work while criticising the place of the state within it. Newman writes (here of Mouffe) that, `[A]lthough Mouffe’s model of democracy enshrines the idea of agonistic contestation, because it is ultimately conceived within the state it avoids the much more fundamental antagonism (or potential antagonism) between the state and democracy itself.’ (97)

Newman’s politics of postanarchism has a lot going for it as a qualified version of Mouffe’s notion of the political. It would have been interesting to see Newman pose the question of institution and hegemony as problems beyond the state, particularly in relation to the spontaneous self-organisation of the masses.

Newman’s reluctance to embrace the ‘ “dirty hands” realism’ (96) of power politics and his rejection of the institutional mechanisms that the left has traditionally utilised to engage in such politics walks right into Slavoj Žižek’s critique of Simon Critchley for appearing to advocate a withdrawal from the meaningful contestation of de facto political power. Newman attempts to challenge this critique in Chapter Four (113-4). While Newman asserts that Critchley is not ‘an anarchist in the classical sense’ (113), his overall project seems quite close to Critchley’s recent work. The two thinkers share similar reference points in contemporary left political theory and continental philosophy. They also share similar concerns, terminology and concepts. Both criticise the central place of the state in the sense of the political that Chantal Mouffe and Ernesto Laclau derive from Carl Schmitt and Antonio Gramsci (11, 89-93); both recognise a strong anarchist current in recent activism (14, 167-8) and propose some kind of anarchist politics in an ‘interstitial’ distance from the state (9, 169). They also both write of an impossible demand (114-5) but Newman departs theoretically from Critchley on this point.

For Critchley, the infinite demand divides and exceeds the in-dividual subject and makes it possible to begin to think politics from an ethical relation between this dividual and others that is prior to individual subjectivity. Critchley’s Levinasian discourse leads him to a proto-political, ethical, social ontology. At times Newman appears highly interested in Levinasian ethics (54-7) but he is not seriously committed to this approach. For Newman, the impossible is demanded of the state and not the subject. He writes that:

Making certain demands on the state – say for higher wages, equal rights for excluded groups, to not go to war or an end to draconian policing – is one of the basic strategies of social movements and radical groups. Making such demands does not necessarily mean working within the state or reaffirming its legitimacy. On the contrary, demands are made from a position outside the established political order, and they often exceed the question of the implementation of this or that specific measure. They implicitly call into question the legitimacy and even the sovereignty of the state. (114)

Newman appears most committed to the ‘post’ of postanarchism when he is critically interrogating the work of Murray Bookchin and John Zerzan on the basis of what he sees as their perpetuation of enlightenment presuppositions in Chapter Five (147-64). Newman’s criticism of Bookchin and Zerzan seems unfair when he himself remains committed throughout the work to key tenets of classical anarchism that would also seem to involve enlightenment presuppositions that remain critically unexamined in the text. Newman argues that ‘liberalism tends to subordinate social needs to individual needs, and equality to liberty; while socialism tends to do the opposite. It is only anarchism that refuses this opposition.’ (145) For Newman, the balance of equal-liberty in anarchism produces a middle way between liberalism and socialism and gives anarchism its sense as a political position. In his conclusion he also writes that ‘for anarchists, democracy must be conditioned by an ethics of equal-liberty’ (179). Newman remains committed to the radical equal-liberty and ethics of classical anarchism throughout the book and this can be said to characterise postanarchism as much as classical anarchism for him, preserving a fundamental continuity of sense between the two.

Newman seems rather oblivious to the tension between his interrogation of the limits of rational humanism in Chapter Two and this commitment to radical equal-liberty throughout the text as a whole. Equality remains implicitly a question of human equality at all times. He shows no inclination towards a post-humanist ontology involving animals or the environment. Newman’s conjunction of anarchism with postmodernism/poststructuralism is thought provoking but lacks something in persuasive power when he continues to operate with the conceptualisations that he notionally claims to abandon. He denounces foundationalism but opposition to the state remains with him the sine qua non of all radical politics, even though this is arguably just as reductive as the sole focus on economy and class that he criticises in classical marxism.