Marx & Philosophy Review of BooksReviews‘The Politics of Logic: Badiou, Wittgenstein, and the Consequences of Formalism’ reviewed by Piotr Stalmaszczyk 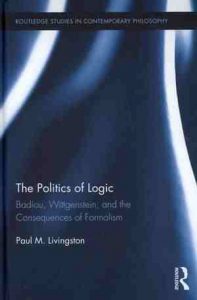 Paul M Livingston
The Politics of Logic: Badiou, Wittgenstein, and the Consequences of Formalism

Paul Livingston, associate professor at the Department of Philosophy, University of New Mexico, specifies the goal of his book in the very first sentence of the Methodological Preface: ‘the aim of this book is to interrogate formal structures and results to determine their bearing on today’s leading questions of social, linguistic, and political life’ (xi). This is a most ambitious task, but already here it needs to be stressed that the author has executed it superbly. The Methodological Preface also provides four principles that determine the method of the book, connected with not assuming ‘any simple outside to language’, not distinguishing the natural versus the artificial approaches to languages, by not sharply differentiating between ordinary language philosophy and the formal approaches, and finally, by putting aside the methodological usefulness of distinguishing the traditions of analytic and continental types of philosophy (xi-xii). Against the background of these four negative principles, Livingston builds a coherent, critical, and innovative philosophy of language.

In the lengthy introductory Part I – ‘Introduction: An Inquiry into Forms of Life’ (3-62) – the author notes that the investigation into the consequences of formalism requires a ‘consideration of the ways that collective life can be theoretically reflected in formal-symbolic theoretical structures and the extent to which such structures can illuminate the lived forms of community and social/political association’ (4). Against this background assumption Livingston discusses issues as diverse (or rather, seemingly diverse) as Badiou’s investigation of formalism, nomothesis in Plato and Wittgenstein, the paradox of opposing unity and totality, as seen by Cantor, Frege and Russell, and Giorgio Agamben’s concept of community. Crucially for the investigation in the forthcoming parts of the book, he introduces a very interesting distinction, inspired to some extent by Badiou (also by the insufficiency of Badiou’s work), into the ‘four orientations of thought’. These are: the paradoxico-critical orientation, characterized by completeness and inconsistency, exemplified by the work of Derrida, Deleuze, Agamben, and the later Wittgenstein. Livingston notes that ‘all of the paradox-critical thinkers stand, in diverse ways and according to differing historical connections, in the legacy of the linguistic turn’ (11). Next is the generic orientation, characterized by consistency against completeness (as in Badiou, but also Gödel), the criteriological/constructivist orientation, where totality is delimited from a point outside of it (Carnap, Ayer, Russell, but also Foucault and Rorty), and the onto-theological orientation, where totality is seen as complete and consistent in itself (Aristotle, Aquinas). The relations among these orientations are schematically diagramed (57), with a further division into critical vs dogmatic, and post-Cantorian vs sovereign orientations (these four orientations are further elaborated upon in Chapter 9). Throughout the Introduction, the author argues for ‘the necessity of a pursuit of formal reflection that is simultaneously both political and logical, operating as a consideration on the lived consequences of formalism, and hence on the reflexive possibilities and limits of the formalization of formalism as such’ (60).

Part II, ‘Paradoxico-Criticism’ (65-183), provides a detailed study of the paradoxico-critical orientation. Livingston starts with tracing the origins of this orientation in structuralism (represented by de Saussure, Lévi-Strauss, Benveniste, Lacan, Miller) and analytic philosophy (Carnap and Quine). He notes that the traditions of both continental structuralism and analytic philosophy begin with ‘a formative conception of language as a total structure of signs’ (84). Further chapters in this part concentrate on Deleuze’s reinterpretation of structuralism and his Platonism, and Derrida’s deconstruction, understood as a reflection on formalism, where Livingston reads Derrida’s practice ‘as an exemplary manifestation of paradoxico-criticism, which draws out the critical consequences of language’s inherent reflexivity’ (113).

The remaining two chapters of Part II concentrate on Wittgenstein. In chapter 5, Livingston discusses the Tractatus (also tracing interesting parallels with Parmenides), and the development of Wittgensteinian thought (seen as transformation into paradoxico-criticism), especially in relation to the concept of rules and rule-following, whereas in chapter 6, he focuses on the (in)finitude of language and infinity of technique, from a philosophical and critical perspective, noting that the ‘infinity of technique enters a human life, rather, at the point of what might seem at first a radical paradox: that of its capture in finite signs, the crossing of syntax and semantics wherever the infinite rule is thought and symbolized in finite terms’ (155). It would be most interesting to compare this approach with the Chomskyan paradigm of generative grammar, where one of the basic assumptions is that a finite set of rules generates an infinite set of sentences.

Chapter 6 concludes with a summary of the paradoxico-critical orientation, with the first point claiming that critical thought ‘is possible only on the condition of a formal-syntactical consideration of language as a whole in its problematic relation with facts and objects’ (178); further points list the methodological consequences of this assumption, and provide critical implications – ‘paradoxico-criticism understands the excess of signification, and hence the paradoxes of reflexivity, not as problematic effects of language but as constitutive conditions for (the possibility of) “meaning” as such … and thus the ultimate basis of the “ideal dimension” of language, and hence of the Idea as such’ (181).

Part III, ‘Badiou and the Stakes of Formalism’ (187-315), studies the consequences of formalism, with ‘the many worlds of Badiou’ as a critical framework for the analysis. Livingston begins by contrasting the genetic orientation with the paradoxico-critical one, most importantly in the former mathematics is an extra-linguistic formalism, whereas in the latter mathematics is a (linguistic) technique, hence there is no position outside language, and no metalanguage (188). In Chapter 7, Livingston carefully discusses the development and changes in Badiou’s work, especially the formal and ontological aspects of this work, and in Chapter 8, in order to clarify the differences between the discussed orientations, he contrasts Badiou with Deleuze, Derrida, and Wittgenstein, respectively. As already observed by the author in earlier parts of the book, in Wittgenstein’s vision of language, the possibility of language is constituted not by the agreement of a conventional institution or socially grounded norms of practice, but rather by agreement in judgments grounded in forms of life, the ground of ‘those aspects of our lives and bearing that first make anything like meaningful language, and hence also any “socially whole” possible at all’ (235). For Badiou, on the other hand, there is ‘no interesting problem of the relation of language to life or of the role within it of what we reflectively grasp as techniques and rules’ (236).

Chapter 9 is devoted to a critical consideration of Badiou’s position on language, world, truth, and politics. Livingston observes that Badiou ignores the question how formalism enters a human life, which ‘affects in a fundamental way his arguments against the contemporary orthodox political orientation of “democratic materialism” itself’ (239). The author returns here to his distinction into four orientations of thought with very interesting discussion on the position of contemporary and historical philosophers with respect to these orientations, he also observes that ‘it is possible to see the twentieth-century investigation of formalism and its consequences, in both its symbolic-logical and structuralist modes, as having articulated what is indeed a profound and decisive break with the history of philosophy hitherto’ (254). The chapter concludes by specifying the features of the politics of paradoxico-criticism ‘ in its relationship to the indiscernible and to what, as its constitutive paradoxes demonstrate, is excessive to possible signification’ (279), with the first point stressing that ‘wherever language of any kind is concerned, [there is indeed] a structurally necessary excess of representation over presentation’ (279).

Whereas the first nine chapters of the book are largely theoretical, or even meta-theoretical, the last chapter moves to consider praxis and is devoted to the critical and practical consequences of the politics of logic. Throughout the book Livingston has argued that his approach to the politics of logic ‘offers to update and transform the classical theoretical problematic of the bios politikon by means of a (meta-)formal inquiry into the existence and effectiveness of forms and formalisms in the shaping and determination of collective life’ (281). In the final parts, the author discusses the politics of environment and education, as two cases exemplifying the relevance of the paradoxico-critical approach, and where this kind of ‘transformation in thought and action’ in social, political, and economic aspects of life may (and should) be applied. Livingston has managed to demonstrate that formalization and formal structures not only help with describing and interpreting the world (state, society, community), but can also be used to change it.

The reviewed volume ends with copious notes (317-62), and a comprehensive bibliography. Throughout the notes, Livingston provides additional comments, alternative readings, and points to possible lines of inquiry (often not related directly to the main issues of the book) – as in (to mention one example only) the note on strong incommensurability as a useful methodological guideline for rereading Kuhn’s works on scientific revolutions and paradigm change (359). Both the notes and the bibliography further testify to the breadth of Livingston’s scholarship. The Politics of Logic is a major contribution to contemporary philosophy, very demanding and thought provoking, setting the highest standards for research in modern philosophy, and philosophy of language in particular.