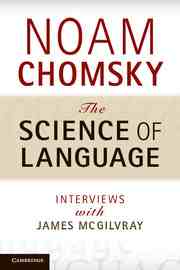 Noam Chomsky
The Science of Language: Interviews with James McGilvray

Like many others, I read my first book by the linguist and public intellectual Noam Chomsky as a politically-concerned university freshman. The book was Necessary Illusions: Thought Control in Democratic Societies (1989), and it proved an eye-opening book for me, causing me to see the political world in totally new ways. Since then, I’ve lost count of the number of books by Chomsky I’ve read – two dozen at least. And while anyone who has never read Chomsky will benefit from picking up any one of his books, I don’t think I can recommend that anyone plough through his entire collected works.

Why do I say this? On the one hand, Chomsky’s analysis of world politics is generally clear and consistent over time. On the other hand, his analysis revolves around a few key points, and once those points are grasped, there’s not much more to learn. Political power in the United States (the focus of Chomsky’s analysis) largely rests in the hands of a closely-interlocked network of public and private elites. Those elites make policy in their own interests, often at great costs to the people of other countries as well as non-elite U.S. citizens. They conceal the selfish pursuit of their interests behind an ideological veil, which makes their actions appear noble and benevolent. They dominate and control (indeed, own) the major media outlets, and so not surprisingly those outlets put forth a worldview that largely reflects elite ideology. None of this happens because U.S. elites are particularly wicked; it’s what elites tend to do most of the time in most of the world. If one wanted to reduce Chomsky’s politics to a bumper sticker, one could simply quote Chomsky’s favourite line from Adam Smith: ‘All for ourselves and nothing for other people, seems, in every age of the world, to have been the vile maxim of the masters of mankind.’

This is a profoundly insightful point to make about world politics, but if one gains this insight through reading Necessary Illusions, one probably doesn’t need to gain it again by reading Deterring Democracy (1992), or Year 501: The Conquest Continues (1993), or World Orders, Old and New (1994), or Rogue States (2000), or … you get the idea. The names and the dates and the details may change, but the message of Chomsky’s political work has remained pretty much the same for over four decades.

Which brings me to The Science of Language: Interviews with James McGilvray. The four interviews contained in this volume were conducted by McGilvray (a Professor of Philosophy at McGill University) in 2004, along with a follow-up interview in 2009. McGilvray does not present the interviews as discrete wholes; rather, he has rearranged the various questions and answers thematically, with some elimination of repetition (3). McGilvray has also provided brief commentaries on each chapter of the book, as well as a glossary and twelve substantive appendices providing additional detail on Chomsky’s views. (Note that in this review I quote freely from both Chomsky and McGilvray’s summary of Chomsky’s position.) The result is a fascinating exploration of both Chomsky’s current thinking regarding linguistics and his thoughts regarding the nature of the scientific enterprise. Both are quite clearly relevant to Chomsky’s politics, and so despite the book’s focus on language, I found The Science of Language shedding a great deal of light on my understanding of the political Chomsky.

Obviously, The Science of Language is centrally about linguistics, and so any discussion of the book must begin there. Chomsky believes – and has believed for decades – that human beings have an innate language faculty, one that is most likely very simple in nature. The existence of such a faculty provides the simplest and most elegant solution to what Chomsky calls ‘Plato’s problem’ – the problem of ‘how a child could acquire a given natural language in a short time, given minimal input which is often corrupt and without any recourse to training or “negative evidence”’ (244). The emergence of this faculty explains

what is sometimes called a ‘great leap forward’ in human evolution in a period roughly 50,000-100,000 years ago, when the archeological record suddenly changes radically. There are all sorts of indications of a creative imagination, planning, sophisticated use of tools, art, symbolic representation, and taking careful note of external events, such as phases of the moon, things like that. And it looks as though that is about the time that whatever put language together emerged. (70)

This ‘great leap forward’ provides strong evidence for the simplicity of the language faculty – for its emergence all at once out a single genetic change. If it were the complex product of a series of small evolutionary adaptations, the emergence of language, tools, etc. would have been similarly gradual. The precise nature of this language faculty remains a subject of investigation, although Chomsky currently believes its central component to be Merge, a mental operation ‘which gives a creature … the capacity to engage recursion to an in-principle unbounded extent’ (176).

Throughout the interviews, Chomsky expresses strong views as to which parts of linguistics are susceptible to scientific analysis and which are not. He draws a sharp distinction, for example, between the nature of language and its use. A child’s native endowment – what Chomsky calls ‘Universal Grammar’ – provides her `at birth with a set of principles – grammatical universals or rules common to all languages. Among these principles are some that allow for options. The options are parameters.’ (245)

Set the parameters one way, and the child becomes proficient in English; setting them other ways will result in a child capable of speaking Hindi, Russian, Swahili, etc. Linguistics, according to Chomsky, should concern itself with these ‘principles and parameters,’ which together define what combinations of words a proficient language user will comprehend. But linguistics has little hope of providing insight into the way people use language. This is because there is no one thing that people do with language. They do, of course, use language to make truthful statements about the nature of the world, as many philosophers of language stress. But an ‘emphasis upon truth-telling distracts attention from the far more prevalent uses of language in thought and imagination, speculation and self-berating, etc.’ (191) Linguistics should devote its attention to those questions which it realistically might answer.

None of this will be news to anyone familiar with Chomsky’s work in linguistics. It does, however, provide some insight into what Chomsky has to say about politics – and, more crucially, what he doesn’t have to say. Chomsky regards science as an enterprise radically unlike the process generating ordinary everyday knowledge. For him, scientific theories consist of ‘statements of functions aimed at describing and explaining what there “is,”’ preferably through ‘mathematized or formally specified function statements.’ (167) The production process for such theories relies upon ‘quite different capacities of mind’ than the production process for folk beliefs (72).

Needless to say, this sets a high bar for science. As Chomsky has pointed out elsewhere, most of modern medicine does not qualify as ‘science’ by this standard. And this is not the fault of medical researchers; the human body is a terribly complex system. The problems faced by physicists (e.g., large bodies moving through space) and chemists (e.g., atoms joining together to form molecules) are just much simpler, and hence much more scientific progress has been made regarding them (106). The problem of how universal grammar works might just be simple enough for science to gain traction on it, but the problem of determining when human beings will utter one sentence rather than another seems hopeless. Indeed, answering even the comparatively simple question, ‘Why does a cockroach turn left?’ remains completely intractable, and so ‘questions of will and choice’ remain ‘for the moment, maybe permanently, outside the sciences.’ (97)

Chomsky, of course, has never claimed that his political work qualifies as social science worthy of the name. And this brings me back to my original point – that Chomsky makes a few basic and reasonable points about politics and repeats them, with variations of detail, over and over again in book after book. These books are well worth reading, although one probably does not need to read more than a few of them. But perhaps Chomsky does not venture into new ground in his political writings because he believes the task to be hopeless. Perhaps Chomsky believes that the only alternative to his standard set of observations about politics is the development of a mathematically precise, accurately predictive, and rigorously tested social science. Perhaps Chomsky sees such a social science as impossible, and thus sees no reason to try for anything new and innovative in his political work. But perhaps – just perhaps – if Chomsky did not draw such a stark line between common sense and science, he might find room for a more carefully-developed political analysis, even if it remained less rigorous and mathematical than physics. I would eagerly read the book that resulted from such analysis. But I fear that I wait for such a book from Chomsky in vain.