Marx & Philosophy Review of BooksReviews‘Rosa Luxemburg: Ideas in Action’, ‘Rosa Luxemburg and the Critique of Political Economy’, ‘The Letters of Rosa Luxemburg’ reviewed by William A Pelz 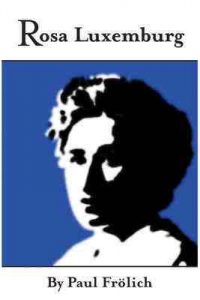 Riccardo Bellofiore
Rosa Luxemburg and the Critique of Political Economy 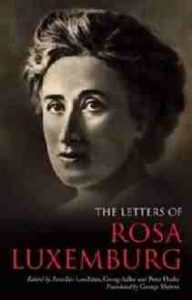 Reviewed by William A Pelz

William A. Pelz is the Director of the Institute of Working Class History, Chicago ( …

At first glance, these three works would seem to have little in common save having Rosa Luxemburg as their touchstone. After all, one is a popular biography, the second a collection of economists commenting on Luxemburg’s contributions, and, the last an anthology of personal letters. Yet, taken together these works provide a most useful introduction to a woman who was one of Europe’s most significant Marxist thinkers and activists. If Rosa Luxemburg was, in the estimation of Marxist historian Franz Mehring, the best brain since Marx, she has not been given her full due, at least not until recent times.

Witness the fact that Paul Frlich brought out the first full length English language biography of her two decades after her murder. Frlich’s Rosa Luxemburg is a highly readable introduction and in some ways even exciting for those new to the subject. Written by a fellow socialist who worked with Luxemburg, the book has a sensitivity and enthusiasm for its subject that is typically lacking in more dispassionate works. This proves to be the book’s greatest strength … and its greatest weakness. It gives the reader a real sense of Luxemburg as an activist, thinker, and as an actual human being with both strengths and weaknesses. At the same time, this is the great weakness of Frlich’s volume.

Written when fascism was triumphal in Germany and spreading throughout the West as Stalin ruled Russia and the Communist International with an iron hand, this book is too often marked by the times in which it was written. At times, the rhetoric is overemotional, as when the author claims that there is a law of nature preventing the spirit of Rosa Luxemburg from ever being lost. Further, her old comrade wrote this biography in the harsh conditions of exile without having ready access to other sources or eyewitness that might have made his study more nuanced. For example, the post-war two volume work Rosa Luxemburg by J.P. Nettl is vastly superior in both detail and sophistication of analysis. That said, Frlich’s work is a good introduction for the political novice hoping for an introduction to Luxemburg’s remarkable life and work. Of course, many have attacked Frlich’s Rosa Luxemburg: Ideas in Action on various political or ideological grounds. Not surprisingly, some critics have found it too sympathetic to Luxemburg the “dissident,” while others claim he blunted the revolutionary essence of Luxemburg’s thought. When politically engaged individuals discuss a subject as potentially controversial as Luxemburg, such disagreements are likely inevitable.

For the scholar who seeks an intensive analysis of Luxemburg’s economic theories, there is the excellent Rosa Luxemburg and the Critique of Political Economy skillfully edited by Riccardo Bellofiore. This collection of thirteen essays covers a myriad of topics including Luxemburg’s critique of Marx’s spheres of reproduction, finance, crisis theory, the limits of capital, imperialism, the theory of wages, trade unions’ relations with the party. This book marks a significant break from the tradition of separating Luxemburg’s economic theories from her politics. This work is of more than historical relevance as it restores Luxemburg’s work to its rightful place as a useful prism through which to understand contemporary capitalism. Bellofiore’s collection may seem not for the faint of heart, however, once the reader has worked through the impressive contributions, a treasure of new insights and theoretical propositions will be the reward. Even when one disagrees with any one author’s interpretation, the reader will gain a deeper understanding of the issues discussed. For example, if Luxemburg is correct about the need for capitalist economies to penetrate non-capitalist spheres to maintain profitability, this opens up a wide range of new perspectives on contemporary political economy. Hers was not a simplistic theory, as vulgar Marxists have sometimes contended, but a remarkable analytical tool for understanding the world.

Last and far from least is The Letters of Rosa Luxemburg. After Luxemburg’s murder in 1919, Lenin declared that her works should be translated into all major languages and widely distributed. As with so many of Lenin’s wishes, this never came to pass. Now, however, an ambitious project to present all of Luxemburg’s work in English translation is underway under the editorial direction of Peter Hudis, to be published by Verso. [In the interests of full disclosure, it should be noted that the current reviewer is a member of the editorial board.] If the first volume, The Letters of Rosa Luxemburg, is any indication, this will be a major intellectual contribution to the English language literature on European Marxist thought.

Widely praised on its release, this volume is in turns touching, insightful, and intellectually provocative. This book allows Luxemburg to speak for herself on a wide range of subjects that will be further developed in later volumes. The result is a series of surprisingly topical and relevant insights notwithstanding Luxemburg having been dead for the better part of a century. Luxemburg’s letters often read as if they were written today. Her uncompromising humanism, faith in the common people, and hope for a better world come leaping off the page while her critiques of imperialism, war and the danger of unprincipled political compromise could come from a twenty-first century critic. Unlike more academic and specialized works, this has a broad appeal to both scholars and the general public, allows appreciation of her perceptive ideas and radical suggestions. To be sure, at times her arguments will provoke controversy, as when Luxemburg dismisses nationalism for oppressed nations like her native Poland. At other times, she seems prophetic as when she assures a friend that the anti-Semitism in Russia will prove to be far less deadly than that developing in Germany. Yet she was far from naïve about the ways in which the Bolshevik Revolution was becoming undemocratic and potentially sinister. In the summer of 1918, when many European radicals were still prevented by the glow of the Revolution’s success to realize how it was already degenerating, she wrote : “… [in Russia] the latest turn of events is generally abysmal, One would like to give the Bolsheviks a terrible tongue-lashing.” (466) Sadly, she did not live to throw her considerable intellectual weight against what would amount to a counter-revolution in Russia.

Taken together these books provide a window into the life and work of a remarkable woman who combined the roles of activist and theoretician. Luxemburg combined theory and praxis in an original and provocative manner. A firm disciple of Marx, she nonetheless refused to treat his writings as holy writ but rather sought to use them as a tool to better understand and change the world. Both her life and her writings made a major, although too often overlooked, contribution to Marxism and radical social and political struggles.

[Another review of The Letters of Rosa Luxemburg by John Green]