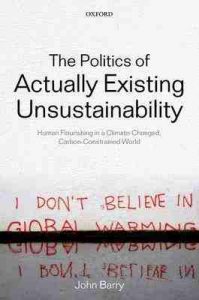 While this is a profoundly academic text, carefully researched and argued, it is also a very readable, profoundly personal, book. It follows on from John Barry’s 1999 book Rethinking Green Politics in searching for a green political philosophy that can confront the ecological crisis of our age. He notes that the situation is now much worse than in 1999 with scientific evidence confirming the dangers that green thinkers and activists have been warning of for a long time. Barry provides a comprehensive analysis of green politics, philosophy and economics that makes a carefully argued case for ecological sustainability and social justice based on principles of an approach he identifies as ‘green republicanism’. In this, Barry seeks to reclaim republicanism for green thinking: a central theme of the book is to identify a green republicanism based on solidaristic principles as distinct from a civic republicanism that emphasises the primacy of individual self-interest.

The book opens with an analysis of actually existing unsustainability. The elements of this are an overcommodified, overindebted, overconsuming, growth oriented disembedded capitalist economy and its subservient polity, supported by academic economism. Neoclassical economics in particular is criticised from a Foucaultian perspective as a ‘regime of truth’. Against this Barry assembles a comprehensive spectrum of critical perspectives from Marx , the heterodox tradition and green economics with particular emphasis on ecofeminist political economy and its critique of the barrier between paid and unpaid work, and the separation of economy from society.

This is not a pessimistic book. Barry sees potential for challenge and change in the human condition of uncertainty and vulnerability. Contemporary capitalism has created vast wealth but also inequality and insecurity even among the more affluent. The starting point for social change is identified not only in human vulnerability but also in the resilience and creative ability of movements such as transition towns and the permaculture movement that seek to create ecologically sustainable communities together with the culture that can achieve that change. In contrast to the instrumental rationality, efficiency maximisation and profit orientated growth dynamic of modern economies, Barry celebrates ‘slack’ and ‘redundancy’. This leaves space for noncommodified areas of human life and wider nature to flourish. Happiness (in the Aristotelian sense) is the aim, with the evidence of unhappiness and discontent in the world of actually existing unsustainability indicating that there will be popular support for new ways of thinking and living.

The bulk of the book is concerned with the economics and politics of achieving a sustainable society that would enable human flourishing. Barry wants the boundaries of the economy to crumble and integrate with a wider concept of a ‘social economy’ that embraces paid and unpaid work. The existing economy needs to be disrupted , slowed down and reconceptualised. Key to this would be the creation of a citizen or basic income. The question then becomes how this would be ‘financed’. There are only two ways this can be done, through taxation of the existing monetary system (which is largely based on bank created money as debt, identified by Barry as a major source of unsustainable growth) or a socialisation of the monetary system though the direct issue of money by the green republican polity itself. The logic of Barry’s argument is that it should be the latter.

Barry summarises his vision of a green, sustainable and resilient order as: awareness of, and attentiveness to, the multiple dimensions of vulnerability as a permanent feature of the human and political condition; the role of the state as removing obstacles to human flourishing, in particular inequality; re-constituting the economy to embrace reproductive and social economic labour; re-orienting the economy away from growth and enhancing community, cultural and psychological resilience, thus creating ‘coping mechanisms’ in a carbon constrained and climate-changed world.

Barry denies that green politics is just a middle path between reformism and revolution. He sees it as a clear alternative that is ‘critical of … state-centric politics and market fundamentalism’, instead, ‘championing community against both the state and the market’ (283). This demands a cultural change where people shift their identity from allegiance to the market or state to an emergent solidarity of community expressed through civic responsibility and direct democracy. Barry’s republicanism stresses responsibilities as well as rights and calls for a ‘civic sustainability service’ that would be undertaken by all citizens.

For Barry, it is the vulnerability and uncertainty of human existence that will trigger this process and become the basis of transformation. He sees all human communities as timebound and contingent. He argues that solidaristic green politics will prevail because they will more demonstrably find a path to human flourishing in the face of ecological crisis than self-interested individualism. Barry sees the politics of sustainability as pluralist, agonistic (rather than antagonistic) and creative. He draws on the ideas of Vaclav Havel to contrast the civic liberalism of personal survival to a polity where ‘proud and responsible members of the polis … [make] … a genuine contribution to the creation of its destiny’ (288). He sees Havel’s writings as resonant with green ideals of human conviviality, quality of life and well-being. This does not mean a self-denying asceticism but a sustainable materialism of consumption rather than consumerism.

As with much green thinking around community, the spatial level at which this will occur is a critical question. Is localism essential? Could there be a green republican nation state? Or a green republican region such as the eurozone? Basically is the possibility of a green republican community determined by size, some form of pre-existing communal identity, or by its political/economic structures? Do solidaristic egalitarian communities emerge or do they have to be created? Will communities necessarily muddle their way through to a caring, sharing, sustainability rather than some sort of atavistic authoritarianism? In his final paragraphs Barry does acknowledge that the ‘hard green’ perspective has been shadowing his analysis with its prediction of a de-civilising ecological collapse. Barry’s hope is that an active green republicanism will anticipate and avert such an event in the face of ecological collapse. This, he argues does not represent a ‘naïve utopianism’ but a ‘basic conviction that another world is possible, necessary and desirable’ (290). Let us hope that such optimism will prove to be justified.