Marx & Philosophy Review of BooksReviews‘First the Transition, Then the Crash: Eastern Europe in the 2000s’ reviewed by Alex Cistelecan 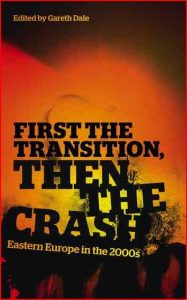 Gareth Dale
First the Transition, Then the Crash: Eastern Europe in the 2000s

‘There are characteristic moments when you are suddenly confronted with unexpectedly improved historical visibility; such is defeat’ (G. M. Tamás). Or, one might add, such is crisis. Thus, the present economic meltdown constitutes the unfortunate occasion for a fortunate epistemological switch, and, for what concerns Central and Eastern Europe (CEE), the chance for a different view of its recent fate and a serious questioning of the predominant narrative of its post-communist transition. This volume edited by Gareth Dale seizes this epistemic moment and successfully takes up the challenge.

The usual narrative concerning transition in Eastern Europe is a strong mix of technocratic, apolitical and utopian considerations. As Stuart Shields argues in his essay, ‘the main thrust of much of the current literature is a fixation on analyzing a technocratic and incremental process of post-communist change in the context of Europeanisation. Central to this literature is an unacknowledged normative commitment to depoliticized change in CEE’ (172). In this context, the communist period of almost half a century is treated rather as a historical parenthesis, whose magic closure in 1989 opened the way – even if a painful way, filled with institutional reforms, technocratic readjustments and normative belt-tightening – for Eastern Europe’s reentry into the European normalcy. The shattering of this myth of European normalcy has also challenged this ideological discourse of European integration, while bringing to light the concealed political economy of transition, whose reappraisal and critique Dale’s volume sets as its main task.

Another crucial element of the myth of post-communist transition and European integration is the magical moment of 1989, a moment of pure awakening in which the people from Eastern Europe simply joined hands, broke their chains and chose freedom. Questioning this voluntaristic view in the opening essay of the volume, Dale spells out the structural and long term causes of this event. There are, according to him, five such causes, none of them confined to the ‘Eastern exception’: the demise of the ‘national economy’ type, both in the West and East; the global slowdown in economic growth; consequently, as a response to these two circumstances, the ascendancy of neoliberal economic policy; the spread of liberal-democratic governments, backed by both normative claims and pragmatic, economic arguments; and finally, the global downturn of the labour movements. (5-8) From this perspective, the moment of 1989 represented not so much the ending of the Eastern European exception and the beginning of its integration into the Western normalcy, but rather the culmination of a structural rearrangement of the presumed normalcy itself.

Along similar lines, G. M. Tamás questions the simplistic assumptions of the ‘transformation scholars’, such as the view that 1989 brought – or should have brought – merely the replacement of one ruling class with another in Eastern Europe, or the naïve view that 1989 represented the passage from central planning to free markets, which overlaps neatly with the passage from socialism to capitalism. What both these views miss are the structural continuities between the two types of political regimes, such as the ‘separation of the producers from the means of production’, which ‘has never been transcended’ in actually existing socialisms (25) or, regarding the opposition between planning and the market, the fact that ‘in both cases, the mediator [between production and consumption] and the decision-maker are impersonal institutions’, even if ‘their class bias is different, as are the beneficiaries’ (27). Given these structural continuities concealed by the superstructural rearrangements, one should abandon the naïve idea according to which Eastern Europeans simply progressed from oppression to freedom. Rather, Tamás argues, ‘from a state of complete unfreedom, East Europeans progressed to a state of freedom of the unfree’ (39).

Another decisive element of the classic narrative of post-communist transition concerns the balance of gains and losses between the West and the East. As the story goes, the process of European integration seems to have been to the sole benefit of the East, which gained freedom and democracy, and which was sustained in this by generous contributions of capital investments and normative know-how provided unreservedly by the West. This story does not stand up to critical scrutiny for several reasons. Firstly, the presumed political benefits to the East are radically challenged by the concrete numbers that document the economic impact of the post-communist transition. As Dale remarks, `taking the period 1990-2010 as a whole, much of CEE experienced a regional Great Depression; in GDP terms it was a lost two decades’ (11). Or, as Adam Fabry notices, ‘throughout the region, economic restructuring led to a “post-transition recession”, the magnitude and duration of which even the World Bank admitted was “comparable to that of developed countries during the Great Depression, and for most of them it was much worse”’ (221).

Secondly, one should not underestimate the power and influence that the political and economic model of transition adopted in the East has granted to Western interests in the region. Dispelling the myth of the foreign direct investments (FDI), which are promoted by the West and welcomed by the Eastern governments as a pure gift from above, Švihlíková argues that, in fact, ‘the FDI inflow puts further pressure on the balance of income, when dividends and profits leave the country. It may be only a question of time before the FDI inflow stops or slows down, due to more profitable investment opportunities elsewhere for example. Thus, pressure can be put on any government to sustain favourable conditions for FDI (including tax and social dumping), because otherwise large outflows of dividends and profits could catalyse a financial crisis’. (195) In the same way, the fact, highlighted by various authors in the volume, of the overwhelming percentage that foreign capital and financial institutions hold in Eastern Europe drastically curtails any space for political and economic maneuver and autonomy in the region. In some countries this reaches more than 80% or 90% of the banking sector, a striking exception and a dangerous economic experiment.

Thirdly, there are the unquestionable benefits that the process of transition provided for the West. Even at the theoretical level, the narrative of the presumed mutual benefits brought by the free market should be radically questioned. As Dale argues in his opening chapter, ‘contrary to Ricardo, international trade liberalization tends to benefit regions with concentrations of absolute (‘competitive’) advantage. Trade between such regions and those with little or no areas of absolute advantage, instead of bringing mutual benefit, steers the latter towards persistent trade deficits, foreign exchange strangulation and mounting debt’. (3-4) This theoretical insight is consistently supported by the various country studies provided in the volume. Thus, as Sommers and Bērziņš argue in their article on Latvia, ‘integrating the resources of the Soviet Bloc provided one means by which the USA temporarily overcame its own crisis of accumulation. Thus, functionally, Baltic nationalism came to serve the US and West European spatial fix pursued to restore profits and reduce costs of restructuring the transatlantic economies’ (119). The benefits for the West were manifold: access to raw materials, access to new markets, access to skilled and low paid labour relatively close to their core economies, and, last but not least, the benefits brought by the politics of cheap credit and debts for all. As the same two authors argue, ‘it was not merely the removal of Soviet Bloc competitors and access to new consumers in the East or the return of Soviet Bloc raw materials to the West that temporarily buoyed the economies of the West. The last chief source, and one which has contributed to the current economic crisis, was the collateralization of previously debt-free property in places like Latvia, which in the short term delivered super-profits to the West’. (127-8). Similarly, Adam Fabry notices how the benefits that the post-communist transition represented for the West affected also the internal social policies in the West, in that they offered a strong leverage in dealing with the labour movements at home: already weakened by the demise of the socialist alternative, the Western unions and labour movements were now supposed to curb their demands in line with the existing reserve army of cheap skilled labour in the East. As Fabry argues regarding the case of Hungary, ‘the flow of foreign capital to CEE economies enabled capitalists in the core economies to spur a “race to the bottom” by forcing workers in their countries to accept lower pay and conditions… The great beneficiary of these policies was Germany, whose main source of growth in recent years was through the accumulation of a current account surplus, achieved through pressures on pay and conditions rather than productivity growth. This surplus was then recycled through foreign direct investment and German bank lending to peripheral countries and beyond’ (220-1). Considering that, besides these economic benefits, the magic moment of 1989 also provided a rejuvenation of the political model of the West, a new found belief in its promise of freedom and democracy which, after years of Thatcherism, was already rather shaky at home, one could say that, perhaps, the post-communist transition served not so much for Eastern Europe’s rediscovery of its own European values and identity, but rather for Western Europe’s readjustment to its own economic system and political ideology. Politically and economically, the post-communist East functioned as the West’s ‘structural adjustment’ to itself.

Throughout the volume, the articles spell out the various – and yet so similar – paths of each country from the post-communist transition, through the arduous processes of European integration, institutional building and normative realignment, up to the present outcome, the economic crash. What is striking in this collection of country studies are not only the similarities between the paths of the various national transitions, but rather how little these regional similarities are known, not only to the Western reader, but even to the Eastern one. As a matter of fact, the feeling of regional belonging and common destiny, already weakened in the last decade of communism, vanished altogether after 1989, when each country struggled to meet the Western criteria on its own terms and, if possible, better than its neighbors. From this perspective, this volume offers not so much the chance for the region to rediscover its common particular culture and tradition – which, after all, is currently being reinvented by some of the Western leaders, under the banner of the irreducible laziness, corruption, mendacity, authoritarianism and disrespect for democracy which presumably define the East and constitute just as many causes of the current European deadlock – but rather the chance to redefine a common political goal and alternative strategy to neoliberal hegemony.