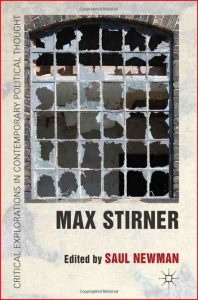 C. Richard Booher is studying for a PhD on Johann Gottfried Herder at Syracuse University. He is …

Max Stirner was the enfant terrible of the left Hegelian circle, often referred to as the ‘young Hegelians’, that arose in Berlin in the 1840s. In his lifetime, Stirner’s sole book, The Ego and Its Own, sent shockwaves through left Hegelian intellectual circles, inciting critical responses by the likes of Bruno Bauer, Ludwig Feuerbach, and the young Karl Marx. By the end of Stirner’s life, however, he and his book were almost completely forgotten. Efforts have been made to revive Stirner several times, most importantly by the nineteenth-century anarchist John Henry Mackay, who is responsible for collecting and preserving Stirner’s writings and authoring a comprehensive biography of Stirner.

The present edited volume aims to bring about another resurrection of this egoistic gadfly by introducing Stirner to a broader public and demonstrating his relevance to contemporary radical theory. It contains a substantial introduction, six essays on Stirner’s thought and influence, a brief biography of Stirner by David Leopold, as well as a translation of an essay published in 1847 under the name G. Edward, which may have been authored by Stirner himself. The essays contained in this volume would serve as a helpful aid to those encountering Stirner for the first time, though there are also essays that will be of interest to scholars of Stirner, anarchism, and Marxism.

Many of the essays touch on the relationship between Stirner and Marx, and with good reason. The lengthiest section of Marx and Engels’ The German Ideology is devoted to attacking ‘Saint Max’, as he is mockingly referred to by Marx. This alone is prima facie evidence for the importance that Stirner had for Marx. Paul Thomas’ contribution to this volume develops an interpretation of the relationship between Marx and Stirner intended to show that Stirner’s impact on Marx was deep and substantive. In his central work, Stirner attacks a series of ideas – State, Family, Man – which he describes as fixed ideas lacking in substantive reality, and which are hypostasized by individuals in such a way that they come to dominate human life. According to Thomas, Marx’s arguments against Stirner reveal the shortcomings of Stirner’s approach, in that they demonstrate how Stirner succumbs to ideological illusions about the nature of individuality. Stirner, on Thomas’ reading, conceives of liberation as involving simply a change of belief and ignores the material realities of the oppressive apparatus of the state and other social and economic institutions. It was Marx, according to Thomas, who was able to see that liberation and freedom required changes in the material conditions of human society, and not merely changes in our ideas. On this account, it was the prodding of Stirner that led Marx to articulate his theory of ideology and to develop a materialist argument for the social nature of humankind. The upshot of this reading is that the development of some of the central tenets of historical materialism are in great part a product of Marx’s engagement with Stirner.

Saul Newman argues that Stirner’s account of the problem of voluntary servitude is a strong and valuable resource to which contemporary radical political theorists ought to pay more attention. It was Stirner more than any other modern radical thinker, according to Newman, who made the problem of persons’ submission to repressive and oppressive institutions a central theme for radical political thought. While Newman is correct that Stirner had a role in making this problem central, some aspects of his claims concerning Stirner’s value and originality seems to be overplayed. For example, Newman claims that one of the ‘major contributions of Stirner’s thought to anarchism, and indeed to radical politics generally today, is to bring to light what was the blind spot of revolutionary discourses based on the idea of universal emancipation – the problem of voluntary servitude.’ (206) As a historical point, this comment is apt and corresponds nicely with Paul Thomas’ account of Stirner’s role in the development of Marx’s account of ideology. However, Newman seems to intend his point to apply to the present and suggests that understanding the problem of voluntary servitude requires a return to the study of Stirner. It would not be accurate to claim that the problem of voluntary servitude has been a blind spot for radical political theory in the twentieth-century, as it is a problem dealt with by numerous thinkers who have sought to develop the Marxist theory of ideology, including but not limited to Gramsci, Althusser, and the members of the Frankfurt school. Perhaps the concept of voluntary servitude has not entered into public consciousness as it should, but there has hardly been a dearth of attention paid to it by radical political theorists. It might be that what Newman means, rather, is that Stirner’s approach to the problem is superior to other approaches. However, no argument is offered for this position and, it seems rather, that Stirner has a rather weak account of how the ‘spooks’ he aims to exorcise originate or how they come to have their power and what it would take to liberate ourselves from them. Stirner may have been one of the first to identify the variety of ways in which what he called ‘fixed ideas’ can cause people to reconcile themselves to oppressive and unfree social conditions, but he doesn’t seem to have a theory capable of thoroughly explaining this phenomenon. A stronger argument needs to be made for the strength of Stirner’s account relative to other theories in order to successfully establish Stirner’s importance for contemporary radical thought.

Because of Stirner’s opposition to the state and his reception by anarchists such as John Henry Mackay, Benjamin Tucker, and Dora Marsden, he is often included in anthologies and histories of anarchism, though he never described himself as such. If anarchism is simply the belief that the authority of the state is illegitimate, then Stirner is quite properly regarded as an anarchist. Some anarchists, however, have been uncomfortable with the inclusion of Stirner in their tradition. This is primarily because of Stirner’s stubborn individualism and his rejection of the idea of revolution and political programs. Stirner’s favored form of political action is the individual revolt or insurrection, a form of action which may perhaps not even be properly conceived of as political. Additionally, Stirner seems to reject all forms of association between individuals that are not temporary and he even encourages individuals to regard others as property or means to be made use of, rather than as deserving respect or recognition as having value of their own. Hence, for anarchists who aim to define an anarchist political program, or even to articulate the possibility of a stable anarchist society, Stirner is commonly seen as bad company to keep.

In her contribution to the present volume, ‘Why Anarchists Need Stirner’, Kathy E. Ferguson argues that Stirner offers a helpful corrective to doctrinaire tendencies of some anarchist theorists. Ferguson offers both a conceptual and a historical argument for her view. The historical argument documents Stirner’s influence on important anarchist thinkers such as Emma Goldman, Alexander Berkman, Gustav Landauer, and others. Ferguson’s conceptual argument attempts to lay out what these thinkers found attractive in Stirner, which is both his attack on various forms of reification and also the worries that he raises about the desire for authority that can threaten to turn allegedly liberatory political movements into repressive ones. Setting aside concerns about Stirner’s anarchist credentials, another essay in the present volume by Ruth Kinna offers a very fine, albeit brief, account of Stirner’s influence on John Henry Mackay and Dora Marsden, both interesting thinkers who developed different forms of egoism under the influence of Stirner. Both authors make it clear that the attempts to cleanse Stirner from histories of the anarchist tradition are untenable, though Ferguson’s argument that anarchists need Stirner is not entirely successful. For a great deal of Ferguson’s strategy consists in showing how Stirner’s ideas bear a family resemblance to recent work on ideology by Slavoj Žižek. If Ferguson’s argument is correct, then Stirner might possibly be a useful thinker to engage with. But if Marxist and post-Marxist work on ideology would also alert activists and theorists to the same dangers that Stirner warned against, then it isn’t clear that Stirner is needed. At least, more would need to be said about Stirner’s unique merits vis-à-vis other thinkers.

I will conclude by noting two general concerns about the present volume. The first is that too few of the essays engage in criticism of Stirner. Much effort is made to present Stirner’s ideas in a favorable light and some intriguing interpretations are offered, but Stirner’s failings and weaknesses are generally ignored or glossed over. This is unfortunate, as one can learn a great deal from a consideration of a thinker’s faults, and the opportunity to learn from Stirner in that way is missed. Second, there are several important topics omitted that deserve more attention. Among these are Stirner’s conception of property, his understanding of freedom, and his relationship to Hegel. These topics are frequently alluded to, but each deserves a more thorough discussion. These sins of omission are only venial, though, especially in a volume that was produced with the intention of stimulating rather than terminating discussion. In this respect this volume succeeds, and will serve as a valuable resource for students of Stirner and the movements or thinkers who he influenced.