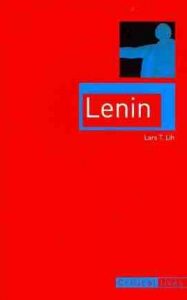 Lars Lih’s essay offers a short yet comprehensive historical account of Lenin’s thirty years as a revolutionary, from his workings in the illegal Marxist reading circles to his years as a world revolutionary leader of the Communist International. Structured as a drama in three Acts with Lenin as the tragic hero of world revolution in the twentieth century, Lih offers a surprisingly fresh and witty account which neither deems Lenin a ruthless opportunist nor falls into the kind of dogmatism of the Stalinist era bygone. It rather situates itself inside of a rich tradition of philosophical (Lukács on Lenin), historical (Harding, Lenin’s Political Thought) and socialist activist (Cliff’s four volume biography) of treating Lenin as a consistent revolutionary socialist who held the belief that “the emancipation of the working class is the act of the working class itself”.

By combining a clear narrative with political aptitude and historical method, Lih’s essay though offers something unique to this tradition of writings on Lenin. The First Act deals with the creation of Russian Social Democracy which imbues the small yet steadily growing working class with its historic mission of proletarian revolution. It is in this period between 1894 and 1904 that Lenin “falls in love with the works of Marx and Engels” (13) in the illegal reading circles which would be part of his life until the October Revolution. Yet, it also is the period in which the Russian workers’ movement and the Socialist intellectual circles come into first contact and later merge.

Whereas Lih is correct in his assessment of the political impact that the Narodnik terror and the execution of his older brother Alexander had on Lenin, it is unclear what role the Russian translation of Capital (1896) or indeed the first generation of Russian Marxists such as Georgi Plekhanov had. The underlying reason for this strategic omission lies in the fact that Lih treats Lenin’s Marxism as immanent in his political practice throughout the essay as a whole. Thus, the influence of theory such as Lenin’s turn to reading Hegel at the outbreak of World War 1 in 1914 on Lenin’s practice is not explicitly acknowledged anywhere in the book.

Rather, Lih emphasises the influence of the SPD’s Erfurt Programme and Kautsky’s “heroic scenario of class leadership” (43) on Lenin’s political practice in building an all-Russian national organization which was rooted amongst the urban working classes of Petrograd and other cities where former peasants now found themselves subject to capital. This allows Lih to argue rightly that Lenin remained consistent throughout his entire life whereas the real opportunists and philistines were Kautsky and the other European Social Democrats of the Second International who joined in World War 1 unlike the Bolsheviks under Lenin’s leadership.

The central episode of the essay is the Second Act which deals with Lenin’s political crusade to overthrow the Tsar – the democratic and political revolution. It is central in that Lenin consistently argues for Russian Social Democracy to both go beyond the economism of some sections as well as the terrorism of others. Lenin (1961, 192) writes: “The present-day terrorists are really ‘economists’ turned inside out, going to the equally foolish but opposite extreme”. Instead, he argues for the primacy of politics. Lih underlines Lenin’s method: “The politically oriented agitation of the newspaper would also strengthen nationwide unity, since political issues tended more than economic grievances to be common.” (78) Despite its failure, the 1905 revolution allows Russian Social Democracy to come into contact with millions of workers for the very first time.

Again, Lih draws the parallels between German Social Democracy and Lenin’s political practice of committing himself to fighting for democratic and liberal rights by revolutionary means during this period. What falls short of any mention are the debates that the 1905 Revolution sparked inside of German Social Democracy. Written in its wake, The Mass Strike by Rosa Luxemburg is a ground breaking work arguing that the economic demands can feed into political demands and vice versa. Nor does the Petrograd Soviet or young Trotsky’s then-unknown thesis of permanent revolution receive any mention which shows that Lih treats Lenin’s Marxism exclusively as immanent in his political practice. This however doesn’t acknowledge that ideas stand in a dialectical relation to the action of revolutionaries.

This becomes particularly striking in the Third Act which deals with the onset of World War 1 in 1914. The dramatic turning point of European Social Democracy and Lenin’s life are underplayed. Lenin and the Bolsheviks’ internationalist position are unique as the SPD and the other Social Democratic Parties of the Second International take a pro-war position. Not only is Lenin shocked to read Kautsky’s and others’ jingoistic writings. Instead he tries to explore the underlying reasons for Social Democracy’s betrayal only to find out that Kautsky and others had abandoned the more revolutionary writings by the young Marx and indeed the revolutionary dialectic taken from Hegel.

In a quite unusual move, Lenin turns to Hegel’s Science of Logic which forces a break with the deterministic, “scientific” Marxism of the Second International which placed its emphasis on gradualism and the ‘iron laws of economics’. By rescuing the dialectic from the intellectual dustbin, Lenin also reasserts the primacy of human agency in the revolutionary process, which finds its highest expression in the “April Theses” which proclaims “All Power to the Soviets” rather than proclaiming all power to the Bolsheviks or the Provisional Government for that matter. Lih does acknowledge that this represents a major shift in Lenin’s outlook but falls short of developing how theory consistently informed Lenin’s political and revolutionary practice.

The book’s strength though lies in the narrative built up through Lih’s notion of the “heroic scenario” finding its completion in the successful October Revolution 1917 – the climax of the drama. By developing the notion of the “heroic scenario” Lih introduces a “handy device” (197) successfully to show that Lenin wasn’t an opportunistic, power-hungry, ruthless villain as often portrayed but indeed consistent in his revolutionary zeal and application of Marxism.

The “heroic scenario” describes Lenin’s political practice as one which centres on working class self-activity and the revolutionary party as a transmitter of socialist ideas placing itself in constant contact with the Russian working class.

The key theme of this scenario was heroic class leadership. The theme of class leadership had two levels. First, most fundamentally, leadership by the class – that is, the Russian proletariat’s leadership of the whole Russian people, made up of predominantly of peasants. […] For Lenin the urban proletariat was only one part of the narod, but a part to whom history had given a special mission of leadership. […] Lenin also had a romantic view of leadership within the class. He sought to inspire the rank-and-file activist – the praktik – with an exalted idea of what their own leadership could accomplish. (18,19)

For Lih “heroic class leadership” means nothing other than what Gramsci and Lenin himself described as the hegemony of the proletariat – the working class as the revolutionary subject which leads other subaltern and popular classes in struggle. Indeed, it is one of Lih’s key attributes that he can use this notion to develop both a coherent narrative of Lenin’s political life as well as bring readers closer to what Lenin meant by revolution.

In many ways Lih’s heroic scenario alludes to Lukács’ formulation of “the Actuality of Revolution” elaborated in Lenin: A Study on the Unity of his Thought. In the same way that Lukács (2009, 11) wrote how Lenin, “explained all events, Russian as well as international, from this perspective – from the perspective of the actuality of revolution. The actuality of revolution: this is the core of Lenin’s thought and his decisive link with Marx.”

Lih writes the following in a similar vein: “Lenin had an inner political life as well, one that lifted him above day-to-day skloki and factional clashes. This way the life of his heroic scenario through which he interpreted events. Thus Lenin’s heroic scenario became the emotional link between the enforced smallness of his life and the largeness of the political events of the day.” (103)

As Lih uses notions such as “spread[ing] the socialist good news” (86), “the mission of the proletariat” (115), and even Lenin’s capacity to perform “one more round of miracles” (199).after the October revolution a number of criticisms could be raised in regard to Lih’s heroic scenario for being either quasi-messianic or philosophically idealist. The book’s strength lies in uniting form and content in such a dramatic way. This really adds to an understanding of Lenin as a revolutionary and tragic hero of world revolution.

Lih’s book and his other works have been valuable in the debate surrounding Lenin. The fact that Lih engages with socialists, activists (Lih 2012) and academics alike only strengthens his case. By providing rich historical materials on Lenin which fall neither into demagoguery, defamation or denunciation, Lih’s book should be read by those interested in some of the most recent debates on Lenin.