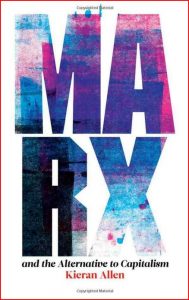 Kieran Allen
Marx and the Alternative to Capitalism

Kieran Allen has produced here an introductory guide to the thought of Karl Marx. Comprehensive in its scope, Allen starts with a brief biographical sketch before offering chapters on key aspects of Marx’s political, social and philosophical theory. From alienation to capitalist crisis via historical materialism and the role of ideology, the author introduces students to the fundamentals of Marx’s ideas. Rather than being an arcane piece of scholarly criticism, however, Marx and the Alternative to Capitalism aims to appeal to ‘a new generation who are being radicalised by the failure of twenty-first century capitalism’ (5).

Allen’s book presumes no prior knowledge of Marxism from the reader, and highlights the relevance of Marxist thought in understanding contemporary capitalism. For example, Chapter Two, ‘A for Profit Society’, asks how it is that shareholders of corporations like the Carlyle group ‘draw millions of dollars in profit to enrich themselves’ (19). Capitalism’s own creation story of hard-working captains of industry is exposed as being ‘built on violence and skulduggery’. We see how religion was used to discourage idleness, and the traditional day off of `Saint Monday’ gradually disappeared, as workers were needed to fill the factories (22). The rise of commodity production solely for the accumulation of capital is charted: ‘there is virtually nothing that capitalism has not turned into a commodity’, notes Allen (25).

How exactly it is that a profit is turned, is explained in the two sections on ‘The Labour Theory of Value’ (26) and ‘Profit’ (28). These are lucid and very useful, not just for someone encountering Marxism for the first time, but also for more knowledgeable readers. In explaining the ability of labour power to produce more value than it receives in wages, Allen proposes an amusing experiment – to try to haggle with a prospective employer, not over wages, but over work effort. ‘You could try a line like “I will give you 80 per cent commitment or work effort if you give me €400 a week”’, he writes (30). The point is, of course, that the capitalist needs the full potential of the worker’s labour power to make a profit, and also that labour power is an indefinite commodity; the individual capitalist pays the socially necessary wage for his worker to reproduce his labour power, after that the labour power is the capitalist’s to exploit as far as is possible. In modern capitalism, Allen points to the example of ‘Toyotaism’, where the standard for work performed each minute is 57 seconds. `In other words, just three seconds down time in every minute.’ (46).

With his contemporary audience in mind, Allen often starts discussions with some particular observation about contemporary capitalism before moving on to a more general level. For example, the chapter on alienation opens with a fact about the widespread problem of mental illness in the United States (35). He opens the book by drawing our attention to the extreme opulence of the capitalists’ ‘fantasy playground’ of Dubai, before contrasting it with the super-exploited immigrant workforce who built it (1-3). Chapter 4 on social class furnishes the reader with some statistics on rising inequality – e.g., that one per cent of the population own thirty five per cent of all privately owned wealth (55). From these statistics, the question of what exactly is wrong with capitalism arises. Allen is highlighting the wealth disparities endemic in capitalism to condemn it, but it could be argued that these inequalities indicate the need for political reform, rather than social revolution? The question then becomes, is capitalism bad just because it tends to produce inequality and alienated individuals? Could not these tendencies be ameliorated in just the way that they are in more equal (but still capitalistic) societies? Many on the reformist Left think so, and if they are correct then the whole need for revolution and the overthrow of capitalism is questionable.

As a Marxist, Allen does not want to be arguing for social democracy or ‘welfare capitalism’, however his emphasis on inequality as the greatest failing of capitalism risks him being hoist with his own petard. An understanding of capitalism that depends for its condemnation on its fundamental (and invariant) condition – that of private ownership of the means of production – and the resulting lack of control by the working class (to be remedied by collective ownership) may be a more fruitful path for the critique of capitalism. Allen uses the fact of inequality and injustice to provoke a sense of moral unease in the reader. This approach has its uses, especially when seeking to appeal to those who have come to Marx as a result of the breakdown of the capitalist system that is occurring around them. However, the risk is that these people are just as quickly lost to Marxism when they find its critique of capitalism to be indistinguishable from that of social democratic reformism.

There are a couple of further points where the book could be improved. Firstly, the discussion of the USSR and Allen’s adherence to Tony Cliff’s ‘state capitalist’ position is a little glib. Certainly, it is not necessarily wrong to view the USSR as a capitalist state, but it is curious and misleading to not even acknowledge the presence of debate around the subject. Allen simply writes that ‘the USSR and the communist regimes of Eastern Europe were not an alternative to capitalism but a mirror image of it’ (151).

Secondly, in Allen’s discussion of capitalist crisis, ‘Crash: How the System Implodes’ (135-50), overproduction, although alluded to, is only once mentioned by name (and this in the context of Ricardo, not Marx). Perhaps this is done to avoid bogging the reader down in jargon. Allen quotes Marx, who puts the cause of all capitalist crises as: `the poverty and restricted consumption of the masses in the face of the drive of capitalist production to develop the productive forces as if only the absolute consumption capacity of society set a limit to them.’ (140-1)

Allen rejects the under-consumptionist interpretation of Marx – where crisis is caused by the worker not receiving the full wage value of his product. For Allen, this argument falls down because it fails to take account of the fact that capitalism can increase demand by ways other than the production of the means of subsistence for workers. Investment in capital goods would be a way whereby ‘the economy could still progress because investment in the capital goods sector helped indirectly to create alternative demand’ (141).

The author goes on to point out the inadequacy of the Keynesian response to crisis: stimulating effective demand. Capitalists may still not invest in production due to falling profit rates. It could be added here that any Keynesian stimulus has to come, in the main, from higher taxation on profit, something that will tend to discourage investment. From here Allen proceeds to explain the law of the tendency of the rate of profit to fall, taking in the cause of this – the change in the organic composition of capital – along the way. Allen places a lot of stress on this law, without properly explaining its relationship to overproduction: is it a cause or an effect?

What Marx’s theory of crisis is and whether it is problematic are clearly much-debated topics in Marxist and academic circles, so again it seems that Allen could have shown some awareness of different interpretations of capitalist crisis, and of problems with the falling rate of profit school of thought. Two of the major problems Allen could have mentioned are 1) empirical evidence on profit rates is contradictory and does not clearly support the falling rate of profit view; and 2) it is hard to imagine that a rising mass of profits is something that sounds wholly unappealing to a capitalist, even if the rate of profit is falling. Even if we accept that there is a tendency of the rate of profit to fall, we are still a long way from proving that this is a cause of capitalist crisis. What seems odd is that this falling rate could be enough to throw the whole capitalist system into crisis. The elephant in the room is the problem of overproduction: the productive capacity of the economy constantly rising until markets become swamped and goods remain unsold. This book would benefit from some discussion on this point.

Allen concludes with four chapters on life after the Revolution. Staying true to his aim of demystifying Marx, Allen brings the discussion back to modern society. He shows how socialist planning could become a reality; how planning is already used in giant companies, some the size of nation states; how capitalism wastes huge amounts of resources on advertising and marketing, and how a democratically planned economy could work. These chapters form a suitable epilogue, and, in keeping with Marx’s dislike of utopian speculation, they emphasise the need for the ‘alternative to capitalism to be constructed in practice before it can be adequately theorised’ (223).

Allen paces his discussion well, and holds the attention of the reader. With a text that is just over 200 pages long, he fits a lot in. This book constitutes a useful jumping off point for further in-depth study of Marxism. As well as the extensive Endnotes and Bibliography there is a Guide to Further Reading for each chapter. Marx and the Alternative to Capitalism constitutes a solid and engaging text that would serve humanities and social sciences undergraduates well as a primary text for an introductory Marxism course.