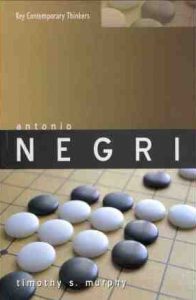 In this study, Timothy Murphy sets himself the daunting task of providing a comprehensive overview of the thought of Antonio Negri. The task is a worthy one due to the peculiar reception that Negri’s work has had in the English-speaking world. Negri emerged into prominence with the publication of Empire, co-authored with Michael Hardt in 2000, a work which had the fortune of becoming an academic best-seller, positively reviewed in venues such as the New York Times and Foreign Affairs. Yet prior to that, Negri, who by then had established a forty year career as a theorist and militant, was little known outside of continental Europe. Few of his works had been translated into English, and those that had were available only in hard to find editions put out by small presses. Though this situation has begun to change in recent years, scholarship is only now catching up with the oeuvre of this important thinker.

Murphy organizes his account chronologically, and helpfully divides Negri’s intellectual development into four phases. (The dates that follow are not provided by Murphy, but are derived from his account.) In the first (1958-70) we encounter Negri the historian of political thought, author of works on Hegel, Kant and, surprisingly, Descartes. During this period Negri was ‘leading a double life’ as a scholar and as an activist (65). It was in the latter capacity that he was led to read Marx seriously for the first time. That intellectual-cum-political engagement issued in the second, Marxist, phase of Negri’s work (1964-78). The writings from that period include contemporary political analyses, bold readings of Marx, as well as studies of economists such as Keynes and Schumpeter. Those works made Negri the leading theorist of operaismo (‘workerism’), a militant brand of Marxism, established in opposition to the theory of orthodox Marxism and the practice of the Italian Communist Party. Negri’s second phase was ended by his arrest for complicity in the kidnapping and killing of former Italian Prime Minister, Aldo Moro, and subsequent flight to France. Wrenched from the political milieu that had given life to his Marxist writings, Negri in his third phase (1981-present) turned again to abstract political theory, in particular to the work of Spinoza and, to a lesser degree, Machiavelli. While in exile in France, Negri began working with Michael Hardt. That partnership led to the central work of Negri’s fourth phase (2000-present), Empire, in which he and his co-author delineate what they take to be a new form of capitalist sovereignty (“Empire”) and the new form of subjectivity (“the Multitude”) which stands opposed to it. The companion volumes to Empire – Multitude (2004) and Commonwealth (2009) – soon followed.

As the foregoing has made clear, Negri’s corpus is a sprawling one. Murphy carefully guides the reader through most of the major works of each phase. Rather than follow that discussion point by point, I shall attempt to state succinctly the picture of Negri as a thinker that emerges and to describe the salient features of Murphy’s approach to him. Having done so, I shall offer some critical reflections on both.

The second pair of concepts helps to clarify the first. Though most schools of Marxist theory have accorded some role to class struggle, I think it is fair to say that it is Negri and his workerist comrades who have gone the farthest in making it the central – indeed, in some sense the only – concept in their theoretical apparatus. The relationship between the working class and capital mirrors that of the relationship between constituent and constituted power. First and foremost the relationship is an antagonistic one. Second – and it is this that is perhaps the most innovative and distinctive feature of workerism – capitalist development is driven by the initiative of the working class. Third, in the limit, it is the goal of the working class to throw off the yoke of capital. That is a possibility because the working class can exist independently of capital, but not the reverse.

The isomorphism between the two concept-pairs indicates that they do not describe two relationships, but different aspects of one. The phrases ‘working class’ and ‘constituent power’ denote the same agent. The former describes that agent in its negative mode (in its struggle against capital). The latter describes it in its positive mode (as the source of creativity and production). Situating Negri’s notions of constituent power and the working class in this way illuminates their antipodes. ‘Constituted power’ and ‘Capital’ also designate the same agent: the state. Understood in this way, the two concept-pairs neatly bring into focus one of the more interesting and consistent features of Negri’s thought – his identification of capitalist agency with the state rather than with, say, business enterprises or the laws motion of capital.

This state-focus is evidenced by the titles of some of his most significant works: “The Crisis of the Planner State” (1971), “The Crisis of the Crisis State” (1980) and, of course, Empire. For example, in that eponymous work ‘Empire’ designates the ensemble of institutions comprising the new form of global sovereignty. (Empire is not a state – hence the reservations I expressed above concerning my definition of constituted power.) The antagonist of Empire, the bearer of constituent power, is “the Multitude”, which is simply another name for the working class. Thus, underneath the immense variations in Negri’s thought, one can discern a remarkable consistency: the drama of modernity is the struggle of the working class against the capitalist state. One of the great merits of Murphy’s study is that by providing a synoptic view of Negri’s work, it allows us to see that drama so clearly.

The sketch of Negri I have drawn is based on Negri: Modernity and the Multitude, but not found explicitly in it. The need for this indirect approach derives from Murphy’s method, which exhibits an unfortunate passivity in the face of the texts it interprets. As I have indicated, Murphy discusses most of Negri’s major works. Those discussions lean heavily on quotation and are largely uncritical. Though this might seem to be the best way to present the basics of Negri’s thought to a larger audience, in the end Murphy’s strategy places a barrier between his subject and his readers. Negri’s writing is notoriously opaque and abstract. It therefore badly needs unpacking in simpler terms and by means of examples. Murphy, however, tends to proceed as if the passages he quotes were transparent, or to explicate them in language that remains close to the original. Another essential ingredient in the quest for clarity is assessment. Here again Murphy refrains from providing what is necessary. Though he reports the views of Negri’s critics – his survey of the criticisms of Empire and its successor volumes is particularly generous and helpful – and at points registers dissent from them, he makes little attempt to sway those not already convinced.

In the end, the affinity of Negri: Modernity and the Multitude for its subject is its greatest strength and its greatest weakness. That affinity is evident in the wide-reading in Negri’s texts that is manifest on every page, and it yields a concise overview of a difficult and complicated thinker. However, it is also what prevents the work from supplying clarification and argument where they are needed.