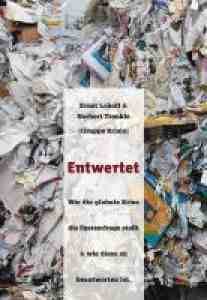 Lohoff and Trenkle’s book represents the first book-length response by the Nuremberg-based group Krisis to the crisis that has been unfolding since 2008. It provides theoretical resources in opposition not only to the dead end of austerity politics, but also to its left-wing critics who object to the ‘injustice’ of cuts that target the poor without calling into question the necessity of austerity in the first place and the economic rationality on the basis of which this necessity is asserted.

The main part of the book is divided into three sections. The first, written primarily by Trenkle, offers an account of the limits of the valorization of capital at the present time, in the context of the massive advances in productivity as a result of the ‘third industrial revolution’ that started in the last third of the twentieth century. The second and third, written primarily by Lohoff, contain an investigation of the concept of fictitious capital and its consequences, in which Lohoff discusses first its theoretical foundations and then its role in the historical development of the accumulation of capital, through the increased significance of second-order commodities, commodities ‘which demonstrate the specific use-value of representing future value’ (19).

The book proceeds by means of immanent critique of political economy of the sort practised most famously by Marx in Capital. Among the most persuasive points in the book are those where the two authors unpick the consequences of particular concepts or arguments of contemporary or classical economics, revealing contradictions within them that are ignored both by their proponents and by many of their Marxist would-be critics. Trenkle, for example, shows how the ‘so-called productivity paradox’ – the claim, now largely discredited, that ‘the introduction of information technologies did not lead to any significant increases in productivity at all, or even hindered the development of productivity’ (79) – was only able appear as such by means of a gross over-simplification of the relationship between productivity as measured by the number of commodities produced per hour of labour on the one hand, and with reference to monetary measures (‘prices, turnover, costs, income, profit etc.’) on the other hand (81). Similarly, he demonstrates the problems of the use of hedonic regression, particularly with respect to the calculation of GDP, in attempting to portray the development of productivity in monetary terms (85-8).

Lohoff’s analysis of fictitious capital proceeds in a similar fashion. In examining how securities fit into the system of capitalist wealth, he shows how the categories of bourgeois economics lead to two contradictory conclusions, depending on whether one starts from the economic definition of value added, or that of money. From the perspective of value added, defined as ‘the sum of all profits, interest and income attained in the sale of goods and services’ (112), stocks and bonds ‘represent social wealth to just the same extent as a car produced by Daimler or the tubes made by Salzgitter AG’ (112). From the perspective of money, on the other hand, defined by economists as at once a means of storing money and the universal measurement of social wealth, bonds and stocks ‘only ever represent growing individual claims to social wealth’, but do not themselves constitute an element of this wealth (113). This is inextricably linked to what Lohoff describes as a ‘double veiling’ within economics of what is specific about the capitalist form of wealth. On the one hand, wealth is understood as it were automatically as a monetary magnitude, and money as ‘the epitome of social wealth as such’ (116) – social wealth is always already reduced to the abstract, monetary form of wealth. On the other hand, economics understands ‘the wealth of capitalist societies only as simple sensuous-material wealth’ (117):

The formation of economic theory and concepts is based quite essentially on the fiction that under capitalism, economies have no content other than the provision of economic subjects with useful goods and the balancing out of different human needs, and that money is a mere means to this end. Whereas on the one hand in all economic analyses, commodities are reduced to their monetary expression, on the other hand they trade under the name of mere ‘goods’ with exclusively sensuous, material characteristics. Economic theory abstracts from the domination of abstract wealth, only in order silently to presume it. (117)

While the perspective of value added ‘places shares, bonds etc. on the same level as tomatoes and cars treats them as elements of social wealth of equal status’, the perspective of money ‘implies the banishing of all securities and titles of ownership from social wealth’ (117). Neither of these, of course, corresponds to the role of stocks and bonds within the development of the accumulation of capital, and Lohoff’s section of this book expounds on and develops Marx’s discussion of the concept of fictitious capital from volume 3 of Capital, in which capital seems to multiply itself according to the ways in which the same capital or the claim on the same debt appears in different forms in the hands of different people. Lohoff charts the transition to what he terms ‘inverse capitalism’, in which the relationship between functioning and fictitious capital is inverted, and ‘the long-term expansion of fictitious capital no longer reflects the development of functioning capital, but rather, conversely, the growth of functioning capital has become the dependent variable of the growth of fictitious capital’ (211).

This book is perhaps notable for the particular sort of intervention it makes. It is not an academic analysis of the crisis, but an intervention as much into public discourse as into debates on the left, and criticism is directed not only at the twin dead-ends of Keynesianism and neo-liberal monetarism that characterize the debates among professional politicians, but also at many of the views that frequently try to pass for as it were alternative analysis, and most particularly the objection that the financial sector has taken on too great a significance relative to the ‘real economy’, an objection that ignores the causes of the flight of capital into the financial sector, and that often finds its expression in bizarre and sinister conspiracy theories. Trenkle and Lohoff describe the ‘melting away of the mass of value’ (97), the shrinking of globally produced surplus value, and the resultant expansion of fictitious capital as a means of postponing the crisis of Fordism. Lohoff insists that this deferral cannot be continued indefinitely and that ‘the dynamic of fictitious capital will sooner or later come up against its limits’ (213-14), but that the deregulation and independence of the financial markets was necessary in order to overcome the crisis of over-accumulation of the 1970s, and to enable the post-Fordist boom (213).

This has something of a retrospective conferral of necessity to it, a claim that because something was the case it could not have been otherwise. This objection is in some ways perhaps little more than a quibble that focuses on the precise phrasing of Lohoff’s argument, but when set in the context of the book’s prognosis, it sits a little uneasily. For the authors set out two possible directions in which the current crisis can develop. One is the ‘catastrophic devaluation of capital’ with disastrous consequences to which is opposed a good life for everybody that is ‘beyond the abstract form of wealth’ (294). This would require a subjective intervention of a hitherto unknown kind, but which ‘can only be developed from emancipatory social movements that constitute themselves in opposition to the administration of the crisis’ (293) – precisely the sort of intervention that seems to be ruled out by the claim of the necessity of the expansion of fictitious capital in order to avoid the potentially disastrous consequences of the crisis of Fordism.

The Krisis group is perhaps best known in the English-speaking world for its Manifesto against Labour and its rejection of class-struggle. This book makes clear that their opposition is not to struggle as such, but to struggle within the limits of the capital-labour relation, and their argument constitutes an exhortation to imagine and to develop forms of political struggle that might be adequate to the radical prospect of the abolition of the rule of value over our lives, the emancipation of wealth from value, or as Lohoff and Trenkle term it ‘the emancipatory devaluation of the production of social wealth’ (294). It is a prospect, and a challenge, of which we would do well not to lose sight.