Marx & Philosophy Review of BooksReviews‘Dialectics and Contemporary Politics: Critique and Transformation from Hegel through Post-Marxism’ reviewed by Joseph Spencer 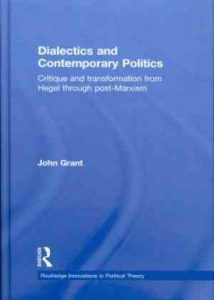 John Grant
Dialectics and Contemporary Politics: Critique and Transformation from Hegel through Post-Marxism

John Grant provides his readers with an account of the relationship between dialectics and politics by taking the reader on a journey from Hegel’s early accounts of dialectics through the political writings of many prominent Marxists of the 20th and 21st centuries. Grant argues that Marxists and other critics of capitalism have continued in Hegel’s dialectical tradition, so that now in the 21st century, a post-Marxist account of politics has arisen in light of a number of factors. These factors, particularly the rise of environmental and economic concerns, provide Grant with the background he needs to advance his case. Some of his claims, however, are far too rushed and brief to be entirely persuasive, and many of his claims are not firmly supported in this rather slim text. In the end, despite these concerns, Grant does succeed in showing a logical progression from Hegel to today, and it is his final chapters that make up for any deficiencies in the early ones.

In the Introduction, Grant makes the claim that this progression from Hegel to post-Marxism can be seen in the election of Barack Obama as president of the United States of America. This claim is a curious one, especially since many of the criticisms leveled against the Bush administration dealing with foreign policy, can also be aimed at the Obama administration in regards to assassinations of US citizens and American action in Libya. Grant, seeing a Hegelian progression of history in contemporary politics, argues that we live in a post-Marxist age, but one that still needs forms of Marxist critique and dialectic if we are to break free from many of our contemporary political problems.

Beginning his book with Hegel, Grant starts this journey through dialectic with the father of modern dialectics. His account of Hegel is one that I found to be one of his most well presented in the book. Grant certainly has a firm grasp of Hegel’s philosophy, and the impact that he has had on successive philosophers. The chapter on Hegel could easily stand on its own as an introductory essay to the importance of Hegel and dialectics in general, so much so that this chapter and the final chapter are Grant’s strongest and most clearly articulated in the book. Hegel, for Grant, stands as foundation of a dialectical political philosophy, and because of this he remains the exemplar for all those who wish to engage in the process of dialectic. Hegel’s methodology finds its practical application in Marxist philosophy, specifically in Marxist political theory, and so Grant contends, it remains a viable alternative to the political systems of the past 150 years.

Grant’s accounts of the impact of Althusser, Adorno, and Lefebvre provide the reader with a condensed overview of these thinkers and their impact on political thought. In these chapters, Grant provides good overviews of these men, but because of the compressed format, the reader feels rushed and may not be able to really appreciate the influence that these thinkers have had on political theory. These chapters are the reason I argue that the book is too short for what Grant is trying to do. Attempting to fit semi-detailed introductions on thinkers as complex as Althusser, Adorno, and Lefebvre into the middle of this short book, Grant is not able to argue successfully that there is a clear progression of dialectics from Hegel to the present; not because there is no case to be made, but because he does not have enough space to work with in arguing his case. Perhaps if the book had been lengthier Grant would have developed stronger arguments for his claims. Now, despite these criticisms, Grant does, in the end, succeed in showing the progression and development of dialectics from early Marxists to the post-Marxist age of politics in which we are now enveloped.

By the time Grant reaches the final chapter of the book, he has already provided a concise, if somewhat rushed overview of Marxist political thought, but it is in these late chapters that Grant truly shines. He argues that due to the fact that we are experiencing economic, environmental, and political turmoil, it is time to turn once more to a politics of dialectics to see if these challenges can be resolved.

While it may have helped Grant’s case to have lengthened this slim tome, since as currently constructed it could use a bit more space to justify a dialectical Marxist program for political philosophy, he does succeed in showing how a dialectical politics can be of help in an age where economic and environmental disaster are at the forefront of our political discourse. Grant’s account of these thinkers, especially the account of Hegel, serves as a reminder that despite his early claim that the election of president Obama is an exemplary case of this dialectical progression, we still have many great thinkers worthy of study to whom we can turn when we encounter political crises. In the end, Grant has done a great service to the political discourse, by reminding us all of the tradition of a dialectical politics.