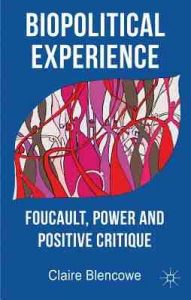 Cary Federman is Associate Professor in the Department of Justice Studies, Montclair State …

Claire Blencowe’s Biopolitical Experience is a philosophical analysis of a concept that has recently taken on the status of a big idea: biopower. The book, Blencowe writes, ‘offers an expansive, materialist, interpretation of Michel Foucault’s critical account of biopolitical modernity’ (1). The central thesis of the book is that biopolitics ‘should be understood as a historically specific formulation of experience and embodiment’ (1).

Foucault believed that the advent of biopolitics required a re-thinking of the question: how should one live? Traditional western thinking on the subject of ethics stresses the autonomy of the person within a moral universe of clearly stated norms of behavior. In both modernity and postmodernity, the moral condition of individuals is marked by an ambivalence regarding right action. Foucault’s focus on experience and embodiment is less a rejection of the Greek and religious traditions in the area of ethics than a re-thinking of their potential in light of the body’s prominence in modern thought. The purposes of this new ethics, then, are twofold: first, to provide a radical critique of transcendental ethics, which links an autonomous subject to a central truth about life, rooted in nature, religion, or history; and second, to create a space for living in a truth that is, itself, radically historicized and decentered.

Not all conceptions of biopower are so liberating. The combination of politics and biology, or the merging of technologies of power with the command over life – biopower – is problematic in modern thought because it can be associated with the darkest aspects of twentieth century politics. Biopolitics can refer to any combination of politics and life, from the normalisation of immigrants, students, and prisoners to more invasive techniques: eugenics, genetic surveillance, psychiatric incarceration and extermination camps. Given technology’s pervasive role in modern society, such a view of modern politics has a certain deterministic taint; it does not leave a lot of room for the ethical practices Foucault describes. Blencowe’s aim is to clear a space for such a mode of living.

Blencowe locates two kinds of biopower: one positive, the other negative. The Italian philosopher, Giorgio Agamben, is closely linked to the negative view. Agamben connects biopower to the weakening of sovereignty and the creation of a state of exception. His central claim is that the concentration camp is the symbol of biopolitical modernity. I will discuss Agamben’s thought below. Blencowe rejects this view. Biopower is the ‘maximisation of life’ and the ‘perpetration of death’ (1). She thus favors the positive components of biopower. By positive biopower, she means a critical strategy that reveals power’s hidden elements for the purpose of creating new embodied experiences. Blencowe focusses on experience and embodiment because she wants to emphasise the ‘positivity, appeal and productiveness of biopolitics’ (1) over and against any transhistorical understanding that begins with an analysis of the concentration camp as the symbol of biopower today, as Agamben does, and, from there, projects an eternal and unchanging meaning onto experience and embodiment.

Experience is also experimentation, and Blencowe means to exploit this dual understanding. Blencowe shows that experience is not the product of an autonomous subject’s rational desires. It is, rather, ‘transformability’ (24). For Blencowe, biopower can be understood in aesthetic terms, rendering subjectivity plural and historical, always in potential, rather than conceiving it as residing in a transcendental, corporeal subject. Focussing on the immanent possibility of a radical transformation of subjectivity allows Blencowe, at the end of her book, to explore the possibility of a true critique of transcendental subjectivity by interrogating nationalism and racism.

Hannah Arendt seems to have been the first to show awareness of biopower, without actually using the word. In The Human Condition, she spoke of the ‘vita activa’, a concept she attributed to Aristotle (Arendt 1958, 7). Aristotle’s conception referred to a specifically political existence. But with the collapse of the polis, that idea underwent unfortunate alterations. What the Greeks thought of as only political, and therefore tied to a concrete understanding of the human condition, the Romans, and later Medieval Christian writers, regarded as social and religious, shrouding life in metaphysical concepts.

In a series of lectures Foucault gave at the Collège de France in the 1970s, he introduced both biopower and biopolitics into the philosophical lexicon, and both words appear in The History of Sexuality: An Introduction, the first volume of three books Foucault wrote on the problem of ethics and subjectivity. According to Foucault, until the seventeenth century, the power exercised by the sovereign was the power over death. By the eighteenth century, the use and administration of power began to change. Governments exercised power in more subtle ways: over life as well as death, and over peoples, not just persons. Biopower is the regulation and normalisation of individuals and populations by government and non-governmental agents. It is an extension of capitalism’s concern over bodies and what they can produce.

Foucault saw power in a panoramic sense, spread out across multiple horizons. He tried, in particular, to forge a distinction between power, that is, something that is derived from sovereign authority, and a less formal and more multi-faceted understanding of power that exists through the molecular elements of the body and the body politic. Biopower is the normalisation of power, which alters the juridical effects that normally produce subjectivity. Foucault was particularly interested in the forces other than law that contribute to and capture these new subjectivities.

Agamben sees biopower as Foucault does: biopower is a technology of power over life. Both agree that a rights-based liberation is no liberation at all. Biopower exists to capture those who have thrown off their chains. But Agamben differs from Foucault in significant ways. Blencowe sees Agamben’s understanding of biopower in negative terms, focussed on a ‘thanato-politics’, that is, as a mixture of an ethics of capture rather than liberation and a politics of death. For Agamben, the central meaning of biopower is intimately connected to the state of exception. The state of exception is a descriptive term for the power exercised by a sovereign during a declared emergency. The sovereign decides the exception, sets the law aside, and decides who lives and who dies. For Agamben, unlike Foucault, the state of exception reveals biopower’s meaning, which is never more evident than in the concentration camp. Life in the state of exception, according to Agamben, is reduced to bare life. Not the vita activa but bare life, not a just existence but just existing defines the state of being human in the postmodern world.

By marked contrast, Foucault accents the experiential as the opening to a new ethics and a new politics. Foucault, Blencowe writes, rejected all prior understandings of experience, the romantic as well as the phenomenological. In traditional philosophic thought, experience is something that an autonomous subject lives through. It is associated with humanistic Marxism, as well as existentialism and phenomenology. Foucault breaks with this understanding. Because Foucault requires a historicisation of the central meaning of experience and of subjectivity, experience is an ‘experiment in living’ (21). Indeed, there is no ‘experience’; there are ‘experiences’. Autonomous subjects do not experience these experiences; rather, subjectivity is ‘constituted through experience’ (20).

For Blencowe, Foucault’s understanding of biopower grows out of ‘the disillusionment with Marxism as a totalizing critique of modernity’ (9). Marxism, Blencowe writes, does not challenge ‘the destructive, oppressive, normalising dominance of biological labour’ (10). Biopower is a new economy of bodies. Blencowe calls this the ‘pluralization of the concerns of Marxist critique’ (13). Foucault pushes the limits of Marxism by exploring the ‘daily struggles to transform power’ (9). In the transformation of power from a formal attribute of law or sovereignty to a product of embodied, biopolitical conceptions, modern subjectivity takes on a performative function. As such, Blencowe draws out the necessary conclusion: biopower cannot be strictly understood in negative terms, as a caged existence. Rather, subjectivity for Foucault exists within a plurality of forces, some of which negate, but some of which provide the grounds for producing alternatives ways of living.

Biopower is a complicated philosophical idea that has important implications for Marxist thought, nationalism, racism, feminism and biology, all of which Blencowe handles with great sensitivity and insight. She probes the thought of Agamben, Arendt, Walter Benjamin and others with care. To be sure, she does not note the determinism inherent in performative ethics. Nor does she address the problem of sovereignty and its connection to biopower. An explication of Roberto Esposito’s work on biopower, which provides an alternative to Foucault and Agamben, might have been fruitful. But these omissions in no way distract attention from the book’s central focus. At the end of the book, Blencowe takes Foucault’s thought to the limit, examining its potential for a political ethics of anti-racism and anti-nationalism by examining the problems of biology, eugenics, and feminism in Monique Wittig’s work. It is an insightful strategy. Blencowe opens up many questions about ethics and politics in a biopolitical configuration that should challenge conventional thinking on such matters. By combining philosophical analysis and political insight, Blencowe has produced a work of formidable scholarship.