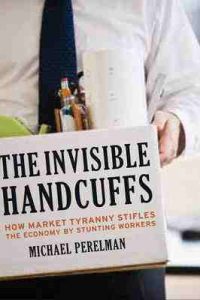 Michael Perelman
The Invisible Handcuffs of Capitalism: How Market Tyranny Stifles the Economy by Stunting Workers

The very title of The Invisible Handcuffs of Capitalism gives the reader a general impression of the subject: a discussion of the restraining and oppressive effects of capitalism on the workforce, presented in the form of somewhat belabored metaphors (if one may risk a pun). Michael Perelman, Professor of Economics at California State University at Chico, is author of many books on the nature and history of the capitalist system and the economic thought it has produced, most written from an explicitly Marxist perspective. This book seems to be aimed at a more general audience, and is written in a more populist style – it is profuse with practical examples, Marx is only quoted occasionally in a passing manner, and while the book is certainly critical of capitalist practice it is somewhat vague on the precise extent of its opposition. That said, it serves a useful theoretical purpose: to gather the different strands of thought about the way in which classical and neoclassical economists as theorists of the capitalist economy have ignored the central role of workers and the production process itself for the reproduction of the said economy.

Perelman addresses the whole range of problems with work and the work process within capitalism: the way it stifles the creativity of the worker, the waste of social productive powers by the many jobs and technical applications created solely to safeguard the managerial power of capital, the superior knowledge workers have of the work process and the struggle over the extraction of this knowledge, the inefficiencies of production all these combine to generate within capitalism, and finally the various kinds of theoretical apologetics generated within economic theory to justify this sorry state of affairs. Many practical examples and quotations support Perelman’s case, and because this is an essential part of the capitalist working experience, yet not familiar to most working people as a subject of explicit theorizing, we may hope it serves as an eye-opener to this extent. Compared to Harry Braverman’s (1999) classic on workers within capitalism, Labor and Monopoly Capital, this work is more accessible in its writing style, and provides useful connections with economic theory itself and its failure to address the centrality of production, in particular in the work of Adam Smith.

But here we also encounter some of the serious problems with this book. Its structure is meandering and unfocused, and much of the time Perelman jumps from one subject to another, one example to another and from quotation to quotation, without it being clear what his point is or where he is going. This creates a lot of unnecessary confusion. The same applies to the structural relation of the chapters to each other – sometimes the chapters are about the production process and the role of the workers, sometimes in considerable detail about history of economic thought, and sometimes about something else altogether. For example, it is not clear what a chapter on the flaws in GDP as a measure of wealth has to do with a book on the role of workers in capitalist production, and the detailed analysis of Adam Smith’s thought is interesting but probably not suited for a book aimed at a general audience. Downright confusing too are some of the strange errors in the work: occasionally sentences are repeated verbatim on the same page; it is strange to say that The Good Soldier Svejk was published in 1912 and yet deals with a soldier during World War I (243); and it is equally odd to say that the Ricardian approach disappeared due to Adam Smith’s “step backwards”, when Perelman mentions in the same sentence that Smith published decades earlier (63). More serious are the awkward metaphors, such as ‘Procrusteanism’, which do not really help the work, and the overly simplistic way in which the author depicts the neoclassical mainstream’s work on workers and the production process. There is barely any mention of the considerable neoclassical work on ‘labor economics’, and it is outdated to the point of a strawman to suggest that neoclassical economics has no interest in bounded rationality.

Overall, though, Michael Perelman has written a readable, if somewhat idiosyncratic, contemporary work on the effect capitalist production has on the workforce, how it restrains and limits them and their well-being directly and indirectly, and how economic theorists have refrained from seriously dealing with this everyday phenomenon. Although the structure could have done with some improvement, Perelman’s considerable erudition in the field of history of economic thought finds a useful application in filling this gap in popular economic literature. And while not quite a Marxist book as such, it certainly establishes a basic framework that would allow any worker to use their own working experiences to question the ideological claims of capitalism’s defenders in economic theory – an important tool for any organizer.