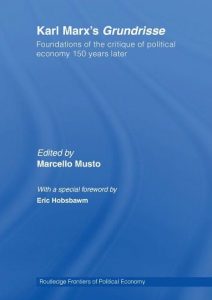 In Part I, chapter one, Marcello Musto provides a balanced account of Marx’s 1857 ‘Introduction’. Musto remarks that in no other work does Marx discuss his ideas about method in such an open way, making these pages ‘extraordinarily important’ (26). But Musto emphasizes the tentative nature of the ‘Introduction’, intended more for personal clarification than as a treatise on methodology.

The second chapter, by Bischoff and Lieber, reviews Marx’s understanding of the relationship between money and capital in the Grundrisse. The authors claim that in the Grundrisse Marx develops the concepts that would allow him to ‘arrive at a notion of bourgeois society as a totality’ (33). And that the fact that the Grundrisse is a ‘rough draft’ is what ‘makes it easier to grasp the interconnectedness of the whole’ (33).

In chapter three, Terrell Carver writes about the concept of alienation in the Grundrisse. Carver proposes a broad understanding of alienation, which includes, among other things, also what Marx describes as ‘division of labor’ and as fetishism. This allows Carver to sidestep the traditional identification of alienation with a philosophically and anthropologically laden vocabulary. Carver’s position is that ‘the vocabulary of alienation suited Marx’s overall argument concerning the relation between labor and capital … as it developed in manuscript and published form, from early 1840s onwards’ (60). While there are terminological differences between the Economic and Philosophical Manuscripts and Capital, such differences are due to context, to the intended public, etc., not to substance. He states that the sections of the Grundrisse that have a general reference to the problem of alienation — whether or not they use the words we come to identify with alienation — are ‘more complex and more referential to the theory of political economy, to the history of production processes and to contemporary social conditions’ (61). But, we must note, Carver is able to reach this conclusion by making alienation and related concepts important but not central to Marx’s thought.

Enrique Dussel writes in chapter four about Marx’s discovery of ‘surplus value’. Marx had already an intuition of this concept in the Manuscripts of 1844, and the notion appears in the Notes on Ricardo (1851 but published together with the Grundrisse), but it is only in the Grundrisse, in later writings and finally in Capital, that Marx develops ‘surplus value’ in all its nuances (68). He notes Marx’s comments on the `civilizing influence’ of capital but adds that this influence is not exercised in the service of humanity but for the increase in value of capital itself (72). Dussel also finds support for the ‘theory of dependence’ in Marx’s comments on how a difference in surplus value before the increase of productive forces affects the production of new surplus value (73, quoting Grundrisse, trans. Nicolaus, 340).

Ellen Meiksins Wood contributes an essay on the ‘Forms that Precede Capitalist Production’ section of the Grundrisse. She agrees with Marx’s project to study the various ways in which the division of labor disrupts the primitive unity between workers and the conditions of their labor and subsistence, but questions the validity of Marx’s typology of pre-capitalist social formations: the Oriental or Asiatic, the Ancient or Classical (Greek and Roman), and a Feudal form which derives from a Germanic path out of the primitive community. Wood summarizes the objections made to Marx’s Oriental form (80-1) which, in her view, is far more accurate than the other two. Indeed we know of societies which resemble Marx’s description of the Oriental form, and possibly they were the rule rather than the exception in ancient civilization (81). But, there is no evidence for Marx’s claim of a direct transition from a ‘primitive’ to an ‘ancient form’ (the Greek city-state with its class conflict). She also finds problems with the Germanic type, important for Marx’s theory because of its relationship with Feudalism and hence with the origins of Capitalism. In Capital, she notes, Marx offers a different kind of explanation for the origins of Capitalism, one in which not the interstices of the old feudal world but its internal dynamics play the central role (85).

John Bellamy Foster proposes an ecological reading of the Grundrisse. Based on recent research, he claims that ‘an ecological-materialistic critique was embedded in all of Marx’s work’ (95). He summarizes Marx’s views on the relationship between man and nature, nature as man’s inorganic body, and other well known positions of Marx. But the main crux of the argument lies in the question whether Marx believes, as some ecologists seem to think, that there are natural limits to growth. He engages with Marx’s criticism of Malthus in the last section of his essay, stating that Marx believed that overpopulation was relative to different modes of social production. Malthus treats the barriers that checked the growth of plants and animals as absolute, a position that Marx rejects. So it would seem that while Marx rejected a metaphysical ecologism, he supported the romantic and philosophical aspiration of ‘a genuine community with the earth’ (105).

In Chapter seven Iring Fetscher revisits Marx’s vision of a communist society. He shows that beyond the shortening of the work day, and the replacement of repetitive activity by machinery, in the Grundrisse Marx evokes an ideal of ‘universally developed individuals’ and hence, a radical transformation of man’s activity.

In the eighth and last chapter of this part, Moishe Postone proposes to use the Grundrisse as an hermeneutic and critical tool to engage with Capital and with the future of critical social thought. Postone deals with issues that have been already presented in many of the previous essays, and his paper can therefore be seen as a summation as well as an original take on the issues raised by Bischoff and Lieber, Dussel, Foster and Fetscher.

Postone introduces his position with three claims: (i) critical social theory has not kept up with the socio-economic developments of the last three decades; (ii) post-modernism has not been able to fill in the void left by the demise of Marxism; (iii) a return to traditional Marxist theory is neither possible nor desirable, among other reasons, because of Marxism’s inability to offer a convincing theory of the nature of what Postone calls ‘communist regimes of accumulation’. Traditional Marxism claims that class societies are characterized by the conflict between transhistorical labor and particularistic and fragmenting social relations that prevent the full realization of labor’s potential. Postone believes that Marx had a very different understanding of the nature of labor and its role in capitalism. In the Grundrisse, Marx makes it clear that overcoming capitalism involves the abolition of ‘value as a social form of wealth’ (125). Marx’s theory should be understood as a critique of labor in capitalism rather than a critique of capitalism from the standpoint of labor (128). For Postone that means that human activity in capitalism has a form that is peculiar to this society, and which is totally different from what may be seen from afar as fulfilling a similar function in earlier societies. The mediating activity of labor in capitalism is not intrinsic to labor (131). Postone claims that these insights, taken from different sections in the Grundrisse, including sections in which Marx addresses the question of automation and the potential for machines to replace human labor, not only enable a richer reading of Capital, but they can also help rebuild a critical theory of society. And he concludes: ‘Marx’s analysis thus implies a notion of overcoming capitalism that neither uncritically affirms industrial production … nor romantically rejects technological progress per se … his theory points to the possibility that what was historically constituted in alienated form could be appropriated and, thereby, fundamentally transformed.’ (134)

Part II looks at Marx the author and his circumstances when working on the Grundrisse. Musto depicts the dire economic conditions of Marx and his family. Krätke contributed two short essays, one on Marx as a economic analyst during the 1850s, and a second one which draws heavily on still unpublished notes on the economic crisis taken by Marx during the period he was working on the Grundrisse. This is material soon to be published in section iv, vol. 14 of the MEGA2 edition and which can throw new light on the composition of the first chapters of the Grundrisse.

Part III contains a broad study of the reception of the Grundrisse in a number of European and non-European languages, and in different regions and countries. Of particular interest are the chapters on the publication and early reception in German and in Russian; this last because the transcription of the manuscripts was made in Russia, and the initial diffusion of the Grundrisse was first reluctantly encouraged and then de-emphasized by Soviet authorities. Regarding the translations to other languages and the interest in the Grundrisse, a quick look at the stories in the different chapters of this section reveals that the Grundrisse first received systematic attention in the post-1968 period, even though it was already available in German in 1939-41 and then in a more accessible edition from 1953. It is in the aftermath of the student revolt that the few book length essays based on the Grundrisse (by Rosdolsky, Negri, Postone, Dussel, and a few others) were published.

It may be more than just a coincidence for this book to be published when a new economic crisis, one of unprecedented virulence and still unknown consequences, was insinuating itself in the US and in Europe. This crisis, like the one that motivated Marx’s work on the Grundrisse, came after a period of relative political de-mobilization and profound crisis in the Left. What should we learn from the Grundrisse in this context? This is not a question that this volume sets out to answer, but hopefully these essays will help those who would again attempt to draw on the lessons of the Grundrisse for the construction of a critical understanding of our times.