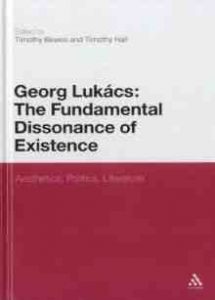 Despite the decline of class politics and the decades-long non-assertion in practice of the proletariat as subject-object of History , George Lukács: The Fundamental Dissonance of Existence is a collection of essays animated by a conviction that Lukács has contemporary relevance. The thread running through the collection is the awareness that such a treatment of Lukács requires coming to terms with a capitalism in which the praxis which animated his theory is lacking. This review focuses on the essays which highlight both the success and the failure to tackle this dilemma in a contemporary reading of Lukács.

The first section considers form, aesthetics, and the intersection of Weber and Marx in Lukács’ work. The essays in this section tend to highlight the continuity of aspects of Lukács’ early works, especially Soul and Form, with his later works. Yoon Sun Lee’s essay “Temporalized Invariance” tackles one of the most important and yet elusive concepts for Lukács: form. Lee argues that there is a subtle change from form as what is invariant in Soul and Form to form as temporalized invariance or as repetition “in the quality of the relations between the moments of a single whole.” (18) Form is thus what we experience over and over again in the repetition of confrontation. The emphasis on quality and relation is meant to indicate that the totality is not merely a quantitative collection of discrete parts or moments, but of significant moments that are internally related to each other. In turn, time is shaped by form and thus is not one, uniform, abstract temporality for all time but dependent on form, that is, by the historically specific kind of repetition. Lee’s argument is that Lukács’ notion of form in both literature and society indicates a “concretely apprehensible concept of history open to action” (21) and thus to transformation.

“How to Escape from Literature?” by Timothy Bewes takes on Lukács’ treatment of the novel and the escape from capitalism. For Bewes, Lukacs’ novel is the arch artistic product of a world of “absolute sinfulness.” (40) It is about the principle of interiority which creates and maintains the chasm between self and world, one which then requires perspective and for Lukács, “perspective, distance is constitutive of the novel.” (40) In a new world, perspective qua subjective viewpoint will cease to exist and we will have overcome the chasm. The question of how to escape from literature is also the question of how to escape from capitalism, which for Bewes “would be answered methodologically with an approach to the reading of novels.” (43-4) or, following Lukács, the theoretical ‘reading’ of society where ‘absolute sinfulness’ is meant as a technical category, not a moral one. This seems an oddly idealist way of posing the problem however, as it remains a problem merely of consciousness.

David Cunningham’s essay re-reads Lukács’ concept of capitalist society through the distinction between the novel as a bourgeois as opposed to a capitalist epic. Cunningham uses this distinction to find in Lukács a theory of real abstraction that is richer than reading Lukács as a theorist of class. Lukács’ theory entails a possible reading of both the novel and society not as structured by the ‘perspective of totality’ of any specific class so much as by the ‘impossible totality’ of capital as a real abstraction. The problem is how to deal with this impossible totality. The novel does so by means of a compromise: by “narrowing down” (54) it handles the totality by taking up only a part, but a part which nonetheless expresses the totality in some manner. If Cunningham has no answer to what this entails for capitalist society, he nonetheless raises the interesting possibility that the Lukács of Soul and Form and History and Class Consciousness really is the better materialist in the end than the later Lukács who insisted on class struggle. “Typing Class” closes this section with a careful discussion of the key concepts of “type”, “objective possibility”, and “imputed consciousness”, which Lukács appropriates from Weber.

The second section, “Life, History, Social Theory” is more mixed, as the broad themes in the title suggest, and yet the common problem of what could possibly constitute a liberatory politics in an era that has seen the decline of classical working class radicalism animates each of these essays, and all are to some degree inspired by an engagement with, and at least partial critique of, Axel Honneth’s Reification (2008) lectures. The problem and possibility of a post-proletarian communist politics is taken up most directly in ‘Lukács sans Proletariat’ by Neil Larsen. Larsen draws on the critique of labor and the proletariat as the subject-object of society by both Moishe Postone and the German Wertkritik milieu as a means to re-appropriate the element of his work that originally animated the Frankfurt School in the 1930s. This re-appropriation develops an analysis of the proletariat as subject and labor as the standpoint of critique and thus against the grain of significant parts of Lukács’ work. However, what makes any re-appropriation possible here as in the earlier essays is the way in which the whole of Lukács’ work has a certain openness. The aporias of Lukács’ work are fertile ground and Larsen believes that the critique of reification leads necessarily to “the idea of the crisis of capital as itself an immanent standpoint of critique” (98), offering a way of conceiving of the formation of a revolutionary subjectivity on the ground not of the affirmation of labor or the working class, but of the hatred of capital driven by the necessity of crisis internal to it which poses the objective possibility of capital’s supersession.

Andrew Feenberg’s “Rethinking Reification” appropriates Lukács by way of Marcuse, working with a notion of reification as “the rational form of capitalist society and an associated technical disposition” (111), while mediation entails “the logic of a radical politics of dereification.” (111) Contemporary struggles around technology point towards revolution exhibiting “the mediation of formal rationality in which Lukács’ dialectic consists” and Marcuse’s “notion of value oriented technological design.” (115) Feenberg argues that this reading of Lukács allows us to focus on the role of technical networks in assembling collective subjects. The possibility of a collective subjectivity around technology follows from Feenberg’s argument that “Modern technology is more than a tool. It is an environment and structures a way of life.” (116) Modernity is thus a modernity of technological rationality under the control of the capitalist class or a possible socialist modernity of technological rationality under democratic control. Feenberg evinces a view that struggles around technology can undermine capitalist control in the name of a value-centered, democratic rationality. This conclusion rests on an assumption of the semi-autonomy of “the life-world” (112) from the rationalized systems of capitalism, and his view is explicitly dependent on Marcuse’s contention that “the culture of capitalism was antagonistic to life itself.” It is this dualism of a noumenal life-world, existing outside of the phenomenal world, from which resistance is drawn, but this condemns us to a critique of capital which, contra Lukács, is not immanent. It also entails the permanence of reification, leaving us at best with an infinite struggle of democracy versus reification, which is to say, capitalism projected infinitely into the future.

The final section, “Aesthetic Reframings”, contains an essay by Lukács, but the section is the most focused on specific artistic works or groups. The Lukács essay provides material for the essays to work from, but I’m not convinced it adds much to what we know. The other essays are solid discussions of literature, but at the same time they seem so caught up in the possible validity of the art they discuss, or of Lukács to the art they discuss, that they lack the critical self-awareness of the earlier chapters.

Andrew Hemingway’s chapter discussing the Lukács essay elucidates the moment that informs Lukács’ critique of “art for art’s sake” as the outcome of life rendered as ‘unbearably abstract’ and ‘unsensuous’. Lukács steps away from this through the concept of tendency literature, which was a kind of critical literature that nonetheless had not yet really become a full-fledged proletarian realism.

Michael Löwy’s essay does redeem the later Lukács’ view of Kafka, though no doubt the finest part of the essay is Löwy’s contention that even when he was wrong, Lukács had an acuity of thought that sheds light on whatever he directs his attention towards. In this sense, Löwy’s piece has a continuity with one of the overall themes of the book: the richness of Lukács’ work that overflows his limitations and reprimands any cheap rejections of his contributions.

For a book dedicated to a critical resuscitation of Lukács, some of the essays uncritically deploy key concepts. Hall’s essay uses terms like justice, nihilism and labor without developing what they might actually entail, instead importing them wholesale from academic debates over ethics. In Chapter 8, Stewart Martin utilizes the concept “life” in a metaphysical manner, but without ever justifying this. (138-9) It seems no accident then that the use of the concept of labor in both of these essays is essentialist. In Hall’s essay, labor is posited as social activity tout court, and concrete labor is what abstract labor suppresses. (125-6) The orthodox play of liberatory concrete labor versus dominating abstract labor is then played out in a very orthodox manner that was deservedly criticized by the Frankfurt School.

This tendency towards unexplicated jargon and undertheorized concepts overwhelms the last two chapters. In “The Historical Novel after Lukács”, John Marx argues that the historical novel points to alternative forms of social organization outside the hetero-normative middle class life-world, which allows us to read Lukács as opening the way for a micro-politics of reform. The language degenerates into a pastiche of Deleuze. The last chapter projects a humanist reading of Lukács’ to theorize political art. While Lukács may have defended the idea of proletarian art and tendency art, it is not clear that he simply had in mind art that was self-certain of its being immediately political. In fact, this would seem to cancel out the very relation of the artist in “sensuous, naive immediacy to the underlying objective forms of life” Lukács’ so prizes in “Art for Art’s Sake and Proletarian Writing”. (159)

The best essays in the book use close readings of Lukács and a diverse set of approaches animated by the dilemma I posed in the opening paragraph to rethink Lukács’ theoretical work. They are not always complementary approaches, but they all have a degree of self-reflection that is refreshing. The essays that do not work as well fail to be as attentive to their own categories and concepts, in the way that real homage to Lukács should entail, instead often relying on what is weakest and most deserving of critique in his work. Nonetheless, this is a valuable collection of scholarship that improves our ability to appreciate Lukács’ enduring contribution.