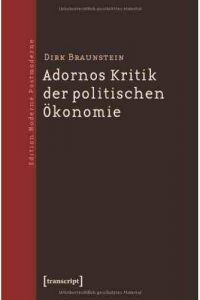 It is a common prejudice that Adorno never engaged himself in a critique of political economy. In this regard he would share a common orientation with most ‘Western Marxists’, who might have used Marx’s or Marxian concepts here and there, but in general did not genuinely contribute to a critique of political economy. Even the classic studies on Adorno or the Frankfurt School make this claim: they dismiss references to Marx as no more than a relic of old times, in any case as a negligible aspect of Adorno’s writings. Yet Braunstein intends to show that the opposite is true – and showing (the German term ‘zeigen’ also means ‘to indicate’, ‘to demonstrate’, ‘to display’) is truly what he does, as he himself emphasizes (10). He quotes extensively from Adorno and his fellow travellers like Horkheimer and, when possible, lets the quotations speak for themselves. By drawing at great length from as yet unpublished (or only recently published) or little-known material like Adorno’s lecture notes and relating these to the published and widely read books, the author shows that `the critique of economy is central in Adorno, albeit this centre is persistently omitted’ (11). It is true, Adorno was reluctant to deal with economics – as was Marx at times – yet it was perfectly clear to him that a critical theory of society could not afford to avoid the complex issue of political economy. It is important to note, however, that Braunstein reminds us not to take Marx’s theory as the benchmark for Adorno’s efforts (13), for this could only lead to the conclusion that Adorno’s critique of political economy failed, since he `very often falls short of his [Marx’s] economic expertise.’ (11)

The book is structured in three parts which comprise a primarily chronological view of Adorno’s philosophy. This is a reasonable approach insofar as it allows the reader to see clearly the continuities and discontinuities in Adorno’s thought while also highlighting the influence of both the issues of his time and/or his previous theoretical work on his thought. The first part covers the early years up to the mid-thirties when Adorno was forced into exile. These years were framed by an encounter with Lukács’ History and Class Consciousness. This book, especially the part in which Lukács elaborated on the concept of reification, heavily influenced Adorno; it is safe to say that Adorno’s path to Marx proceeded via Lukács (whose work he knew and appreciated from reading The Theory of the Novel). He discovered the idea of ‘a self-control [Selbstbeherrschung] of the modern individual’ in Lukács’ seminal work, which would become an ’eminently important insight’ for the development of his own theory (26). However, Adorno also inherited a somewhat inaccurate use of Marx’s terminology from Lukács, for example the confusion of labour and labour power, which he finally dispensed with in his latest works. Other important influences in this period regarding the problem political economy were of course Walter Benjamin (whom Adorno criticised, alongside Brecht, for not having understood Marx properly) and the lesser known Alfred Sohn-Rethel (whose influence on Adorno Braunstein downplays, reducing his influence on Adorno to providing a few catchwords and ideas while they were working on a similar problem in the 1930s ). Towards the end of the 1930s, Adorno, arrived at the conclusion that society can only be understood by employing economic categories, as can be seen for example in his essay, `On the fetish-character of music and the regression in listening’. Insofar as this essay focused on the commodity form, its general conception of the critique of society was still influenced by Lukácsian categories (42). Later Adorno would downplay the main concepts he had used in his earliest phase, as for example in his Negative Dialectics, where he criticises a theory based on reification or for that matter any single isolated concept as undialectical (29). It is, Braunstein argues, with the estrangement (personal and theoretical) from Lukács – while still valuing his early work – and the emancipation from Benjamin, that Adorno’s genuinely productive phase of his life starts.

The second part covers Adorno’s years in exile. When he joined the Institute for Social Research in New York, he was immediately caught up in a debate over whether the socio-economic formations of Fascism and National-Socialism (and to a certain extent also the Soviet Union) could be appropriately conceived as state capitalism, as was the thesis of one of the Institute‘s economists, Friedrich Pollock. Adorno did not make any genuine contribution to the debate, yet he was highly critical of Pollock’s essay, calling it undialectical amongst other things, but did not dare to criticise it, considering that he was not an economist. (151) Following this debate, Adorno’s understanding of domination shifted from the state as an agent to ‘the impersonal ruling capital relation’ (160), to which every individual, as well as states and institutions, are subjected. Braunstein also stresses how the relatively unknown, Reflections on Class Theory, that Adorno wrote in 1942 (published only in 1971), served as an economic foundation for the Dialectics of Enlightenment, even if the aspects of a critique of economy and the references to Marx are largely obliterated in the famous fragments.

In the third part, Braunstein traces Adorno’s development in his late years after his return to Frankfurt. He convincingly shows how his renewed interest in the critique of political economy was fuelled by the emerging student movement as an external factor, as well as by his own theoretical work on the Negative Dialectics, which he developed in a close and steady dialogue with his students. (269) In the late 1950s he taught a course on Weber and Marx entitled ‘Economy and Society’, in which he considered the question of whether economy or society is more ‘original’. This is, from the perspective of Adorno’s own reflections as well, a rather fruitless debate, since a dialectical approach as he imagined it, is not focused on first philosophy but on the ultima philosophia, which means that it is impossible simply to deduce one sphere or concept from the other (primary) one. Braunstein then explores how the metaeconomy, understood as ‘metabolism with itself and with nature for the purpose of its own reproduction’, (396) is conceptualized theoretically, which makes this final chapter both the most difficult and the most interesting. It is important that Braunstein emphasizes how Adorno, despite all the focus on the notion of exchange did not forget about class antagonism and the appropriation of surplus value. In fact, Adorno always insisted that the centrepiece of Marx’ theory is the theory of surplus value (336), because it is in the act of exchanging labour power for a wage that the exchange reveals itself as unequal and unjust. Thus, the supposedly equal exchange of measurable equivalents reproduces the actual inequality of individuals and negates their respective qualities. The true goal would thus be to overcome the exchange of equivalents without falling back into immediacy, since that would only mean that it is the stronger who rules, i.e. barbarism.

What becomes apparent in the course of the book is that Adorno’s main focus regarding political economy shifts from concepts which refer directly to the capitalist mode of production, such as commodity (fetishism) or reification, to the more general problem of exchange. This was not a random move, it was a necessity resulting from Adorno’s extension of Marx‘s critique beyond the capitalist mode of production (in a historical as well as in a logical sense). The clear and most famous example of this is his collaborative work with Max Horkeimer, the Dialectics of Enlightenment. Adorno perceives the period dominated by capital as only a special case of economy, while his main focus is the metaeconomy which is dominated by the exchange of equivalents. All the problematic categories are already included in the concept of exchange, categories such as equivalent, identity, rationality and, for that matter, also equality. It is, for example, precisely via the critique of the exchange of equivalents that Adorno and Horkheimer criticize bourgeois rationality (extending the definition of civil society far enough to consider the ‘ancient city state’ part of it (198)). This problem remains central to Adorno’s thought for the rest of his life, and what becomes clear is that there is an `indissoluble connection between the critique of socioeconomy and epistemology in Adorno.’ (334)

Notwithstanding the great achievements of the book, it should also be mentioned that, mainly due to its academic form, it is at times difficult to read and relies heavily on footnotes and references, which although certainly very informative, tend to conceal the essential lines of thought represented in the book. However, and even if much of what Braunstein elaborates on was already known to the careful reader of Adorno who was sympathetic to political economy and its critique, his study is so rich in material and so systematically structured that it is indispensable for anyone interested in its subject. The book not only provides an account of Adorno’s critique of political economy, but also offers an insight into Adorno’s life and thought.