Marx & Philosophy Review of BooksReviews‘The State and Local Government: Towards a New Basis for ‘Local Democracy’ and the Defeat of Big Business Control’ reviewed by Patrick Ainley 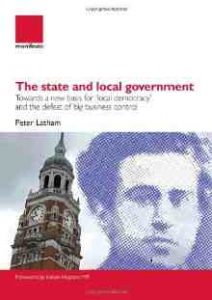 Peter Latham
The State and Local Government: Towards a New Basis for ‘Local Democracy’ and the Defeat of Big Business Control

At 500 pages this book is a tour de force. It comprehensively reviews the recent history of local government in England to provide a valuable resource for those still studying and teaching what used to be called `Social Administration’ in the country’s colleges and universities. It is also a political intervention aimed at restoring democracy to local government. As such, it is a corrective to the simplistic response of those – in school teacher unions, for example – whose reflex reaction to the current impending privatisation and voucherisation of England’s schools is to return Michael Gove’s ‘free schools’ and ‘independent academies’ to local borough and county councils. This because Latham’s history shows how far removed Local Authorities now are from what they were under the national system locally administered that was established under the 1944 Education Act as an integral part of the post-war welfare state settlement or compromise between local and national government in England and Wales.

For non-English readers, as well as reaching out to alternative forms of local government in Brazil, China, Cuba and Venezuela, which are seen as alternatives to neoliberal ‘austerianism’, Latham’s book shows how far the Anglo-Saxon model diverges from the rest of the EU. Here our democratic deficit has long been marked with far fewer elected local representatives per head of the population than any other country save Ireland and – Latham could have added – from the increasingly devolved national regions of Scotland and Wales. He also indicates in conclusion how much further this new market-state could go under the current Coalition privatisation that has succeeded New Labour’s marketisation, while pointing to similar developments elsewhere – in South Africa, for instance.

As well as all this, the book makes a theoretical contribution to Marxist theory as it begins by pointing out that there is no developed theory of the local state per se, as compared with many theories of the state. Therefore, having established in his first chapter his Marxist method based upon dialectics to probe beneath appearances for the historically relative character of social laws, Latham goes on to review theories of the state in subsequent chapters. He begins with classical liberalism as opposed to social-democratic theories that assume the neutrality and malleability to pressure from below of the local as of the national state, reminding us – inter alia – of Atlee’s role in supporting ‘Poplarism’ in the 1920s if not 1930s. By contrast, as traced in detail in successive chapters, the Thatcherite new right saw the need to remake the state in the image of the enterprising wealth creators of the private sector (as they saw them) – as opposed to the drain on tax-payers represented by bureaucratic public servants (ditto).

Succeeded by New Labour’s marketisation of public services, this increasingly turned government – local and national – into ‘governance’ so that, as happened with the previously nationalised industries, not directly providing public services absolves government of responsibility and reduces representative democracy to occasional plebiscites on which gangs of accountants and consultants should take a turn in awarding tenders at the lowest price for the greatest profit to private contractors. Even this would be rendered superfluous by the personalised services being piloted in the North London borough of Barnet with basic packages (already costed out for the NHS) topped up by payment for ‘extras’ – the ‘new frontier in public sector reform’ that was championed by Peter Mandelson. This is only one form of ‘co-funding’ that shifts costs onto citizens become consumers increasingly paying for services to which they were previously entitled. With ‘total place’ or ‘place-based budgeting’ being rolled out under the 2010 Comprehensive Spending Review, still greater efficiencies are possible, as Hammersmith, Fulham and Wandsworth boroughs in London, for instance, share back-office support for merged services – as some universities (Nottingham and Birmingham, Queen Mary and Warwick) are also doing. As Latham summarises, ‘US-style directly-elected mayors with cabinets are the optimal internal management arrangement for [such] privatised local government services.’ (2, 15)

Therefore, amongst the British Marxist and radical theories discussed in chapter four, including Ralph Miliband’s view of the state as containing class conflict, Cynthia Cockburn’s structuralist idea of the local state, ‘dual state’ theories and geographical studies of uneven development, among others, Latham’s perspective seems closest to Dexter Whitfield’s exhaustive tracing of processes of marketisation that have created a new mixed economy in which a state-subsidised private sector dominates a semi-privatised state sector. Latham also supports Whitfield’s alternative modernisation strategy as part of his own ‘socialist decentralisation’ presented in chapter 15. Latham espouses Gramsci, however – as on the book’s cover which features the Italian leader beside the Victorian clock-tower of Croydon Town Hall, the South London home of Latham’s publishers as well as the author’s long support for the Croydon Trades Council and base for his Secretaryship of the Labour Campaign for Open Local Government, supported by Kelvin Hopkins MP for Luton North who prefaces the book.

For Latham, Gramsci’s theory of the hegemonic block both describes what Thatcher-Major and New Labour achieved in preparing the ground for dismantling the welfare state with its full privatisation now promised by the Coalition; and also describes the counter-hegemonic force that Latham argues must be (re)created, for

only [through] the rebirth of a genuinely working class political movement – through the active involvement of the democratic organisations of organised labour, trades unions and trades union councils, in wider mass campaigning and resistance in local communities and the structures of local government – will it be possible to win the battle to restate national and local democracy. (5)

‘To win the battle for democracy’, which Marx saw as the prerequisite for socialist revolution, Latham supports the 2009 People’s Charter to build an Anti-Monopoly Alliance to nationalise the banks as part of a ten point plan.

This implies ‘No to the EU – Yes to democracy’ and requires repeal of the 2000 Local Government Act to reintroduce and enhance the committee system, restoring the right of all councillors to make policy in smaller councils with more councillors paid an average wage-related annual allowance. This would abolish US-style directly and indirectly elected mayors which move in the opposite direction to concentrate more power (and payment!) in the hands of fewer executives and demands instead direct provision by councils of locally administered services to end all forms of marketisation, privatisation and profiteering in central and local government. Abolition of the council tax, stamp duty land tax and national non-domestic rates, to be replaced by a system of annual land value tax plus progressive taxation of income and wealth. Ending the City of London Corporation with its non-residential business vote (extended in 2002) to reconstitute it as the 33rd London borough and – following the Icelandic bank debacle – placing all short-term deposits in the publicly owned banks. The Single Transferable Vote, which Latham sees as the fairest and most consistent option and with which he would replace Supplementary Voting for first and second choices in mayoral elections, has already been lost by Conservative out-manoeuvring of the Liberal Democrats in their Coalition but is still used in Scotland.

provides huge opportunities for bringing together local community groups defending public and social services against the Con-Dem cuts and privatisation on the one hand, and, on the other trades unions, to ensure that the campaigns required to combat these cuts are genuinely broad-based. (377)

The precise form for the rebirth of a genuinely working class political movement cannot at this stage be specified. It will only emerge through the active involvement of the democratic institutions of organised labour, trades unions and trades union councils, in wider mass campaigning, and resistance in local communities both within and without the structures of local government. (ibid)

The unifying role of Trades Union Councils are again emphasised (373) and examples given of Union-supported campaigns to defend local services, together with the Campaign against Climate Change trades union group proposal for a National Climate Service directly creating a million green jobs and indirectly supporting many more.

But, although asserting class conflict as the motive force for social change in his Introduction, Latham analyses class in traditional terms with many intermediate strata between the working and ruling classes. He has no time for those, like Owen Jones or Guy Standing, who see class as having reformed and with the riots of summer 2011 – particularly marked in Croydon – crystallising a new class formation that puts in question Grasmscian hegemony based upon an industrial working class and sees resistance ‘kicking off everywhere’, as Paul Mason puts it, stimulated and ‘organised’ by new media. These new generations have little chance to organise at their work, which is part-time and irregular at best, while high street leafleting or public meetings in Town Halls may have been activities that served their parents and grandparents well but which they feel that they do not have time for, such is the urgency of their and the world’s situation.

However, Latham is critical of demands that do not meet those arising organically from the conditions under which the mass of people live and which therefore seem unattainable to them. He is surely correct to emphasise therefore that a new politics will still need the old alliances so that it falls to labour movement organisations – not least because of their considerable resources and their continued ability to dislocate production – to adopt and develop policies that stretch well beyond simply protecting the immediate interests of their members and which aim to change their more general political and cultural orientation. Peter Latham’s book, beyond its scholarly value and detailed erudition, is an important contribution to such a reorientation.