Marx & Philosophy Review of BooksReviews‘From Kabbalah to Class Struggle: Expressionism, Marxism and Yiddish Literature in the Life and Work of Meir Wiener’ reviewed by Catherine Moir 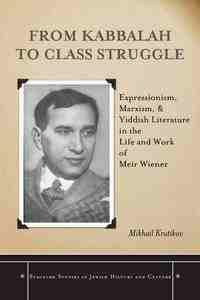 Mikhail Krutikov
From Kabbalah to Class Struggle: Expressionism, Marxism and Yiddish Literature in the Life and Work of Meir Wiener

‘In a utopian alternative history,’ writes Mikhail Krutikov in the Introduction to his monograph, ‘where the Jews of Eastern Europe were spared the Holocaust and the Stalinist terror, Meir Wiener might have become one of the celebrated Jewish intellectuals of modernity’ (1). In what is now our actual history, Wiener’s untimely death in 1941 as a forty-seven year-old untrained volunteer in the Soviet Writers’ Battalion, defending what had become his ideological and intellectual home against the invasion of the German army, saw to it that this version of events never happened. If the authentic future can – along Benjaminian or Blochian lines – be thought of as the retrieval of the pasts that never were, then Krutikov’s masterful study of this almost-lost history will ensure that the life and work of Meir Wiener will be remembered for a long time to come.

Krutikov’s study, fifteen years in the making and ostensibly the richer and more sensitive for it, traces Meir Wiener’s life both chronologically and thematically; the result is a detailed biography of the man, accompanied by a lively critical engagement with his work in context. Wiener is presented as a figure at once ordinary in his time and yet, through the lens of history, rather exceptional. Born into a middle-class, assimilated Polish-Jewish family in 1893, the young Meir studied the broad array of political and cultural concepts available to an educated youth in turn-of-the-century Cracow. The depth and scope of his early Jewish education, covering Hebrew language, Biblical and Talmudic scripture and medieval Hebrew literature, meant, as Krutikov concludes, that Wiener’s engagement with Jewish culture, both as a writer and a critic, ‘was deeper and broader by far than that of any other Central European intellectual of socialist or communist persuasion who came from an assimilated background’ (336). Yet, like many of his contemporaries, such as Walter Benjamin, Georg Lukács and Ernst Bloch, Wiener was also exposed to a wide variety of cultural and scholarly production, reading widely as he did in German, Polish, Hebrew and also Yiddish, the study of which he would later revolutionise.

Prior to his conversion to communism and subsequent emigration to the Soviet Union in 1926 – a move that appeared ‘paradoxical’ to his peers – Wiener’s intellectual interests were rather mainstream (335). He escaped conscription during the First World War, thanks to a special recommendation by a Professor in the Faculty of Philosophy at the University of Zurich, where his study of Spinoza, Kant and Nietzsche specifically informed his ideas about religion (32). Despite his ‘insecure and vulnerable personality’, Wiener had already been well-connected in the literary circles of pre-war Vienna, and he continued to lead an active social life in Zurich, although he never completed his university studies (17).

Three main interests preoccupied Wiener during these early years: expressionism, Judaism and Zionism. His attitudes to all three were interconnected and ambivalent. Wiener’s early poetry and criticism situate him firmly within the ‘expressionist generation’ of early twentieth-century Central European culture (35). He ‘specifically addressed the problem of the Jewish voice in German expressionism’, publishing regularly in Buber’s monthly journal Der Jude and elsewhere (38). Despite Wiener’s broadly damning critique of the ‘entire expressionist generation of German-Jewish writers’, formulated in his reviews of the work of (amongst others) Else Lasker-Schüler and Paul Adler, where he declared that ‘an authentic Jewish-German [expressionist] art was not possible,’ his own creative work from this period was decidedly expressionistic in its main theme and style, drawing on the religious symbolism of Jewish messianism and exploring stylistically the ‘dichotomy between abstraction and realism’ which so preoccupied that genre (44, 35).

The unpopularity of his early work, written in German, together with his ostensible rejection of expressionism, despite its subterranean influence, made him sceptical of the assimilationist discourses of the period. Yet, while he was broadly sympathetic to the spiritual or cultural dimensions of Zionism, he was not an advocate of Jewish German nationalism (53). As Krutikov explains, ‘Wiener saw the main point of Zionism as affirming the supremacy of spirit over matter, of culture over politics, and he rejected the slogan “Palestine by any means”’ (64). His position on literature and politics during this period was heavily influenced by his study of Kabbalah, which particularly shaped his views on messianism. At this stage, the messianic idea was the ‘core element’ of spiritual Judaism and Jewish national identity, but it would remain a central figure for Wiener well into his communist period. Indeed, his conception of the messiah as an ambivalent figure of political struggle and action can be seen to have influenced his move towards Marxism and Yiddish.

His disaffection with the cultural and political landscape of inter-war Vienna ultimately led to Wiener being ‘the only member of that German Jewish intellectual elite’ who ‘chose to abandon German and Hebrew and reclaim his Yiddish as the most adequate and authentic form of expression both artistically and ideologically’ (99-100).

Although Wiener had already come into contact with, indeed appealed in his own work to socialist and communist political and theoretical ideas, it was in the Berlin of the early 1920s, among the so-called Kiev group of Yiddish intellectuals and poets, that Wiener made his conversion. It was no Damascus moment, but rather a ‘gradual … drift … during 1921-1925’ (96). Wiener’s embrace of radical left-wing ideas was neither typical nor completely exceptional for someone of his social background. Yet Krutikov states that Wiener’s decision to move to the Soviet Union in 1926 was ‘the greatest conundrum’ for his biographer (133).

His motives may have been obscure and his adjustment uneasy, but the move was undoubtedly the most significant of his life and career. Despite the fact that ‘Wiener’s first foray into the seismic arena of Soviet Yiddish literary criticism’ – a review of two collections of poetry by the American Yiddish author H. Leyvick, published in Yiddish monthly Di royte velt – was unsuccessful, it was the unique position of Yiddish in the Soviet Union that enabled Wiener to go on to become, as Krutikov’s study confirms, essentially the world’s foremost critic and historian of Yiddish literature, as well as a successful writer himself. The Soviet Union was then the only place in the world where Yiddish enjoyed formal respect and recognition, enabling Wiener to rise to the position of Head of the Department of Yiddish Language and Literature at the Moscow State Pedagogical Institute, the highest academic post in Yiddish anywhere in the world at that time.

While Wiener’s scholarly and creative output in the Soviet Union was more prolific and original than ever before, Krutikov duly acknowledges that it was also necessarily conditioned by the prevailing ideology. In particular, Wiener’s engagement with Socialist Realism is ‘certainly intellectually the weakest and most problematic part of his legacy’, though this is perhaps unsurprising (341). Censorship, indoctrination and the threat of political repression, persecution and execution – a fate which befell Alexander Khashin, who wrote an article in the journal Kritik introducing the Kiev group of Yiddish scholars, to which Wiener belonged, to a European audience – mean that we will never know what Meir Wiener ‘really thought’ about Socialist Realism (106). If nothing else, the fact that he was prepared to volunteer to fight for the Soviet Union in 1941 demonstrates a certain commitment by Wiener to the ideals of the regime at that time.

Notwithstanding the unavoidable obscurity of Wiener’s personal political convictions, his work in the Soviet Union aimed to document and analyse Yiddish literature in accordance with the principles of Marxist-Leninist criticism, an historically highly original approach. While Wiener evidently drew inspiration from Marxist-Leninist interpretative techniques, Krutikov reminds us that, as far as political reality was concerned, ‘Wiener’s general disposition was sarcastic, skeptical and pessimistic’, and finds it ‘hard to imagine him … as a naïve believer in the triumph of a new communist utopia’ (341). Thus although communism and Marxist theory were vital to the contours of Wiener’s thought and work, Krutikov’s study identifies Meir Wiener’s substantial legacy as to the history of Yiddish-language scholarship, which he perhaps more than anyone else of his time revolutionised. ‘On the eve of the German invasion of the Soviet Union’, he concludes, ‘Wiener was in fine creative form, completing a comprehensive history of Yiddish literature and hard at work on what might have become one of the most original novels ever written in Yiddish’ (338).

The portrait of Meir Wiener that Krutikov paints in this book is as detailed as the most intricate miniature, and as impressive as the most abstract tableau. His self-proclaimed aim is to recover and rehabilitate this extraordinary figure in all his characteristically twentieth-century turmoil and ambivalence, an aim he ably achieves. Krutikov’s writing is a rare combination of the engaging and the meticulous, a mixture much-needed to convey the depth and breadth of his research. His obvious fondness for Wiener is balanced by a consistent critical distance: while he does not shy away from discussing the more difficult aspects of Wiener’s ideological positions, with sympathy for the historical context, Krutikov is never apologetic. His view that we can attain a deeper understanding of the world before the Holocaust and Israel ‘if we listen carefully not only to those voices that are in tune with contemporary agendas, but also to those who speak differently’, is at the heart of the sensitivity with which he approaches his material. The great triumph of this work is that it reanimates the voice of Meir Wiener in its proper context. Thus Krutikov’s book not only makes an outstanding contribution to the history of Jewish culture, particularly its Yiddish variant; it is also eminently relevant to Marxist and Soviet historical scholarship.