Marx & Philosophy Review of BooksReviews‘The Least of All Possible Evils: Humanitarian Violence from Arendt to Gaza’ reviewed by Anirban Gupta-Nigam 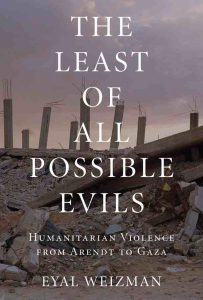 Eyal Weizman
The Least of All Possible Evils: Humanitarian Violence from Arendt to Gaza

Anirban Gupta-Nigam is a research scholar in Jawaharlal Nehru University in New Delhi.& …

Eyal Weizman’s new book, The Least of All Possible Evils: Humanitarian Violence from Arendt to Gaza, is an engrossing read. The subtitle is a bit misleading, giving the impression that this is a rigorous historical chronicle of how the concept of “lesser evil” travelled from Arendt to the present Israel-Palestine conflict. What Weizman offers instead are three episodes: the famine crisis in Ethiopia in the 1980s and the role of Médicins sans frontièrs in it; the legal and political battle around the wall that Israel is building to separate itself from Palestinians; and new developments in the field of “forensic architecture.”

In recent times the question of “lesser evils” has become increasingly important in legal studies, cultural theory and politics – especially following the American intervention in Iraq in 2003. The conventional left critiques of human rights as a universal notion and of humanitarian intervention as an ideological justification for imperialism are, by now, fairly well-known. “The least of all possible evils” has become a principle by which much of what is happening in the world is justified, from the removal of Saddam Hussein and the installation of “democracy” in Iraq, to democracy itself as – following from Churchill’s famous declaration – the least evil option. Weizman reminds us in this book that the least evil is still evil.

Where his book departs from the larger body of reflections gestured to above, is in its relative lack of interest in the big picture as the point of entry into big questions. Weizman’s intervention is fresh because he neither has recourse to frames like biopolitics, governmentality, exception and sovereignty; nor does he explicitly use philosophers to drive home his point. The book’s blurb is right to argue that his is a significant contribution to the understanding of sovereignty, and I would contend this is so because Weizman speaks through location. Each chapter is fiercely local. It doesn’t leave the politics of its place aside in order to make larger claims, and one could argue that it is precisely this account of the complexities of humanitarian law in action on the ground that reveal to us the fallacies of the principle of lesser evil. Implicit in Weizman’s book is the argument that the least evil is better understood by following the nuts and bolts of cases than by taking recourse to already existing frameworks for understanding Good and Evil.

What he does, therefore, is to reveal the contours of the action of humanitarian law through a deep attention to detail and a focus on the way materials impinge on law. He begins the chapter on the separation-wall (titled ‘The Best of All Possible Walls’) by describing the way models can reconfigure spatial relations. Weizman writes about Advocate Muhammad Dahla, who was contesting the construction of the wall in abstract terms at the Hague when he was approached by villagers of Beit Sourik to argue its specifics on their behalf. This meant a close analysis of the ways in which the wall would interfere with the lives of villagers, and it led Dahla and his team to construct a model on the basis of which the case would be argued. Weizman writes vividly of what happened when the model was to taken to court:

Dahla recalled that the porters who carried the model in ‘went around in circles not knowing where to place it’. Somebody had an idea: a table was hurried in from the building’s cafeteria and placed in front of the judges’ bench. Dahla recalled that because the judges’ bench was too high and the table too low, the judges could not see the model from where they sat, and that they had to step down to look at it properly. The judges also called the lawyers from both parties to join them (70-1)

The model was in dialogue with the architecture of the court. Its presence radically changed the way the courtroom was organised and created an alternative configuration of people and things within that space. As Weizman writes, “The court descended into momentary disorder. The physical presence of the model disturbed the legal protocol, and introduced its own rules of language” (71)

Two questions underpin Weizman’s analysis throughout the book: calculation and materiality. Calculation – in terms of proportionality and the counting of acceptable numbers of deaths – comes back again and again. It is unsettling in these discussions, to see how much of international law, human rights discourse, and aggressive governance are driven by a faith in the sheer calculability of human life and damage to nonhuman things and environments. This point is starkest in Weizman’s chapter on forensics, where he discusses how the magic number of thirty civilians is the agreed-upon threshold beyond which no collateral damage can be justified. He directs us to intense conversations on how to keep the numbers down and demonstrates those grey areas where human rights discourse has come to represent the human rights of only the twenty-ninth person and above.

The question of calculability is not separate from materiality. In fact, Weizman argues that in fields like forensics, certain developments have brought them closer and closer. The fourth chapter, ‘Forensic Architecture: Only the Criminal Can Solve the Crime’ is a superb tour-de-force that is worth the price of the whole book. It reads like a breathtaking thriller as Weizman moves deftly between empirical, historical, and philosophical registers, uncovering the changing dynamics of warfare and humanitarian discourse. The chapter begins with a discussion of the release of the Goldstone Report on the Gaza conflict on 15 September 2009, and the suspension of one Marc Garlasco by Human Rights Watch on the same day. Garlsaco is one of the world’s leading experts on forensic architecture. In his long, fruitful career he has worked closely with the American government in planning precise military strategy to achieve only “acceptable” civilian deaths in Iraq; and then gone on to work for Human Rights Watch and (currently) the United Nations. As part of HRW, Garlasco wrote several reports that were highly critical of the Israeli government. Then, sometime around 2009, it was disclosed that he is an avid collector of Nazi war memorabilia. Israel leaped on the opportunity to decry Garlasco and the human rights community at large by arguing that his “fetish” (the word is important for Weizman) for Nazi knick-knacks is the most blatant representation of just how anti-Semitic Human Rights groups can be.

Weizman uses the Garlasco episode to raise a larger question about the field of “forensic architecture” itself. He demonstrates, with great subtlety and narrative drive, how over the years the emphasis in humanitarian discourse has shifted from questions of witnessing and testimony to those of evidence. Invariably, things – buildings, objects, weapons and human remains like bones – are assumed to be mute, non-subjective, indicators of the truth of violence; unlike human beings, who lie, calculate, forget, and plan. This turn in forensics was something Weizman wrote about in a short book he co-authored with Thomas Keenan, Mengele’s Skull: The Advent of a Forensic Aesthetics (Sternberg Press 2012.) In that book, discussing the complicated efforts to determine whether human remains discovered in Brazil did indeed belong to Joseph Mengele, the authors demonstrate how “things” emerge in humanitarian law. In the absence of Mengele as a living body, the scientific and legal process of verifying the remains amounted to what the authors call “a trial of things” (25.) Crucially, Keenan and Weizman demonstrate that, in a situation where facts are always constructed, where science may or may not be able to produce a final verdict from the evidence of bones, law plays a stabilising function. The judgement of law is always in “excess of calculation” (23) it always searches for precision in the face of fuzziness. The investigations around Mengele’s remains inaugurated a new age of alliance between forensic science and humanitarian law. We might venture further, that the rise of this stabilising function of science and law – each of which looks to expel ambiguity – is connected to what Timothy Mitchell has called “the rule of experts,” where domains of knowledge pass increasingly into specialised zones of expertise.

Such a situation is exemplified by the Garlasco case where, as Weizman states, “only the criminal can solve the crime.” Quite literally too, because Garlasco’s first assignment for HRW was a critical assessment of a bombing mission that he himself had planned when he was employed by the Pentagon. An anecdote like this explicates at once, the dangers of certainty, expertise, and calculation when they are expunged of all possibilities of ambiguity. Weizman’s critical eye turns here not only to nation-states that work with principles of collateral damage but also to human rights organisations which – by arguing on these grounds – justify such lines of thought. One possible alternative to this politics of precision, Weizman said during a discussion with Paul Gilroy in London earlier this year, is to move beyond an economy of calculability. The suggestion is less abstract than it sounds. To begin with, it doesn’t entail anything more than a recognition of the incalculable, the ambiguous, and the imprecise at the heart of all operations of science and law. As he writes in the book:

[I]n contemporary forensics, and through the thick field of interpretation and cross-investigation, the problems associated with human testimony – those of the subject – seem to be somewhat reproduced as the problems of the object (115)

A recognition of this fragility of objects, Weizman seems to suggest, can restore a political edge to humanitarianism beyond the pale of numbers.