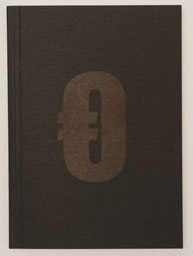 Georgios Papadopoulos
Notes Towards a Critique of Money

There have almost always been attempts to interpret money on the model of language. What changes in these recurrent endeavours is not so much the structure of the analogy, but the underlying theory of language. For his part, Georgios Papadopoulos arms himself with an understanding of language derived from the theories of Lacan and Baudrillard. With this arsenal at his disposal, Papadopoulos tries to analyse ‘the process of the articulation of desire through money and of the constitution of subjectivity in the market economy’ (7). In so doing, he places himself in a noble ancestry and sets himself an audacious task: ‘The Marxist critique of political economy displayed the mystifications of the commodity form, the Baudrillardian critique of the political economy of the sign attacked the sign form, while the current analysis sets for itself the task to combine and further these two critiques of signification and of production, focusing especially on money, which is considered to be the organizing form of the capitalist symbolic order’ (61).

At first sight, Papadopoulos’s conceptual tools and theoretical preliminaries seem to belong to the postmodernist orthodoxy: a sort of radical social constructivism, in which discourse and ideology are a necessary element for the constitution of reality. ‘Social reality’, certifies Papadopoulos, ‘is not something given, independent of human intentionality, but is necessarily constructed by and mediated through discourse’ (20). But even here, among these textbook insights, the reader is in for some surprises. For one thing, Papadopoulos has a rather bizarre treatment of Lacan’s opposition between the Real and the Symbolic: ‘The distinct types of existence that define the natural and the social and the consequent impossibility of domesticating the natural via the social and the Real in the Symbolic animates and maintains social antagonism’ (31). This is doubly weird. First, the Lacanian opposition between the Real and the Symbolic has absolutely nothing to do with the opposition between the social and the natural. The Lacanian Real exists and manifests itself only in and by means of the impossibility of the Symbolic to represent it; while ‘the natural’ must be, even before the social, the first object of symbolisation and formalisation, and quite a stable and knowable object at that. Second, the idea that all social antagonisms derive from the impossibility of domesticating the natural via the social and the Real via the Symbolic has two problematic consequences: all social antagonisms are conflicts of representation, that is, they are internal to discourse; and, because of the founding transcendental operation of discourse, they are, as such, ahistorical, necessary and unavoidable. Papadopoulos might thus explain the recurrent crises and conflicts in society, but the moments of consensus and stability become inexplicable.

Along the same lines, Papadopoulos’s understanding of Marx’s understanding of ideology is, again, strange: Papadopoulos reproaches Marx for his rationalist view, in which ideology is simply a distorted view of reality, and ‘the main obstacle in establishing a genuine relation to reality’ (22). Papadopoulos thus places Marx in the category of idealism only to criticise him from the standpoint of a higher idealism: of course ideology cannot be a distorted view of reality, since there is no immediate reality which is not constituted by a distorting discourse. From this radical perspective, Marx’s point that ‘the main obstacle’ is not ideology but the real conditions which make this ideology necessary becomes totally irrelevant.

How does this shaky postmodernist scaffold relate to money and economy? Very simply: money, prices and the market are nothing but economic versions of the transcendental mechanism of language and signification. ‘The logic of the price and the logic of signification adhere to the same structural form’ (64). Money attaches a signifier – the price – to the ‘real object’ (if Papadopoulos will forgive me this outdated term) and thus constitutes it, gives it a signification, in the same way in which language, by naming objects, constitutes them in the horizon of meaning. At the same time, this symbolic constitution of reality brings with it also the moment of imaginary identification and attachment for the subject: apparently, it is neoliberalism which is in charge of this ideological interpellation of the subject and affective attachment to the symbolic frame of the market.

So what is wrong with that? A priori, there’s nothing wrong with that, says Papadopoulos. (The problem, as we will see, is that with Papadopoulos we can never leave the a priori.) For Papadopoulos, the problem with the economic discourse ‘is not that it is ideological, but that it tends to become universalized’ (20). After all, we all need ideology and discourse so as to constitute reality and allow our participation in it. From this perspective, ‘the capitalistic economism is just one, and probably not the worst, of the possible mythologies we need in order to organize and explain social reality’ (15). The problem is when this economistic mythology becomes hegemonic and universal.

But this is where Papadopoulos gets into trouble. In order to explain this historical evolution, by which the economic ideology becomes hegemonic, one would expect him to leave the transcendental domain of the internal dynamic of discourse, and look for a solid anchorage in some material, historical conditions. But he does not. True, Papadopoulos flirts with this possibility: ‘Economic discourse seems to have finally emancipated itself from politics and culture… Globalization, imperialism, commodification, alienation, rationalization and bureaucratization are some manifestations of the intensification of economic integration’ (14). But these six words are all that Papadopoulos offers in this regard. Afterwards, he flees again into the discursive a priori and offers an internal explanation of the hegemony of the economic ideology. It lies, he claims, in the fact that the value which money expresses in prices is void and empty: ‘The vacuity of economic value, a consequence of the self-referentiality of value in general, makes the signifying operation of money dominant’ (49). But this is even more problematic. For one thing, Papadopoulos does not offer any argument as to why economic value is empty. Certainly, this is not how things stand for Marx: there is a definite social relation, which is concealed and at the same time revealed in the logic of value. The only glimpse of an argument to be found in Papadopoulos is an argument by analogy: since, for Lacan, the master signifier is the signifier without content, the price as the dominating signifier in the economic logic must also be deprived of content. But this is taking matters in reverse order, by stating that the economic signifier is not universal because it is empty, but is empty because it is hegemonic. At best, this argument is simply circular. Moreover, the spectre of history comes back to haunt and disturb the aprioristic argument of Papadopoulos: if the reason for the hegemony of the market discourse lies in the vacuity of economic value, then the market discourse should have been hegemonic from the very beginning; but if economic value has become empty, and thus hegemonic only after some historical accident, then this historical accident, and not the internal logic of discourse, should be the main focus of analysis.

But these are secondary matters for Papadopoulos. His concern is rather to raise the stakes for critical theory. We should, he says, stop wasting our time with minor issues like the critique of capitalism and neoliberalism. ‘The “real” problem is to challenge the system of the production of meaning in an economy where sign and price collapse into each other … it is the structural principle that is determinant; the rules of the bifurcation and separation of form and content, the dominance of the signifier over the signified. We can unmask and resolve the mystifications of the socio-symbolic system of production only if this artificial separation is destroyed’ (65). The problem is not class struggle and exploitation; the problem is this unbearable antagonism between signifier and signified, this unending conflict between form and content.

One might wonder how are we to challenge and destroy the system of production of meaning, the discursive mechanism of signifier and signified, form and content, when this discursive logic is deemed necessary and unavoidable from the very beginning. Papadopoulos prefers not to face this conundrum – if not for other reasons, at least because leaving it unanswered allows him to embrace the romantic and Sisyphean task of a revolution which is necessary and impossible, both at the same time. This revolution is full, total, unhindered jouissance, the jouissance beyond the symbolic castration. ‘The only revolutionary and thus the only political demand is jouissance … Full enjoyment presupposes the end of its symbolic representation, but the destruction of the semiotic code, especially of the system that produces the semiotic content is an impossible task. Revolution is impossible exactly because it has to jump over its own symbolic shadow, because it has to go beyond the symbolic order and to aim for different articulations of desire that go beyond the constitutive ideology of the social reality and that transcend even language; revolt is an embrace of the Real of jouissance’ (108).

After this fiery, romantic display, Yannis Stavrakakis’s Afterword comes like the cold shower of a graduation exam. In it, we are reminded that besides Papadopoulos’s childish, impatient and dangerous – because potentially totalitarian – Lacanianism, there is always a good old liberal Lacanianism, based on the reformist commitment ‘to recognizing and exploring the possibilities of the new in contingent encounters’, and, in general, on an ethical mode of enjoyment aimed at openness and opposed to the ideological mode of enjoyment aimed at closure (113). That much is true: as soon as we start from the absolute of discourse, we can only hope in either an impossible jouissance beyond language, or a patient and rather hopeless bricolage inside the constraints of discourse. But just to be, at least for once, as radical as Papadopoulos, perhaps instead of opting for one of the two alternatives, one should reject their very starting-point.