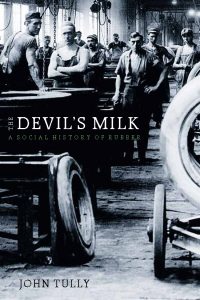 John Tully
The Devil’s Milk: A Social History of Rubber

Zach Sell is a PhD student in History at the University of Illinois at Urbana-Champaign. His …

At the end of the nineteenth century, as wars for empire raged from the Philippines to South Africa, the French tyre company Michelin introduced Bidendum as its corporate symbol. The fat, white Michelin man fast became an internationally recognized symbol for the company. A century later, Bruno Peinado’s sculpture `The Big One World’ transformed the Michelin man into his opposite. The once white now brown Bidendum extends a clenched fist just beyond his Afro. His chest reads “The Big One World.” The sculpture recalls Paul Klee’s `Angelus Novus’; the image Walter Benjamin told us resembled the Angel of History, staring into the past and observing history as a single, unending catastrophe. Like `Angelus Novus’, Peinado’s Michelin Man stares back at the catastrophe of history, open-eyed, expressing awakening.

The Devil’s Milk begins with the transformation of rubber from a substance used in Mesoamerica into a commodity produced for and consumed within the capitalist world market. With the Industrial Revolution, Tully argues, “rubber’s potential began to be realized” (35). During the Industrial Revolution, the production of rubber and rubberized commodities converged with the production of textiles in Manchester. Dependent upon slave-produced cotton from the Southern United States, the textile industry in Manchester was the center of the Industrial Revolution. Covering textiles produced in Manchester in rubber, British industrialists produced not only rubberized raincoats but also Manchester sheeting that became central to industry. In addition to industrial production, the proliferation of rubber throughout Britain changed sexual practice. As Tully notes, the tactile sensation of rubber produced a sexual subculture surrounding Mackintosh coats and the vulcanized rubber condom further enabled sex for pleasure removed from reproduction.

Just as the explosion of rubber production transformed metropolitan imperial culture and industry, it devastated the so-called colonial peripheries of capital formation. Demand for rubber during the Industrial Revolution and throughout the nineteenth century was supplied through the extraction of wild rubber from South America, Africa, and Asia. For colonized populations exposed to regimes of rubber extraction, the impact was devastating. Tully demonstrates this in harrowing detail. Along the disputed borders between Peru and Columbia, the indigenous Huitoto were subjected to brutal violence during the wild rubber boom at the end of the nineteenth century. In the Congo Free State, King Leopold II relied upon a brutal regime of extraction that utilized forced labor and violence in the pursuit of profit.

Following the wild rubber boom, the collapse of prices in the 1890s caused the industrial supply of rubber to shift from wild extraction to plantation production in Malaya, Sumatra, Belgian Congo, and German East Africa. By 1913, plantations in Asia had outstripped wild rubber extraction in Brazil. The plantation industry, as Tully notes, “based upon cheap regimented labor and systematic cultivation under the supervision of experts,” outstripped wild rubber extraction and supplied the growing demand for rubber in Akron, Ohio, a center for tyre production, as well as globally (109).

The explosion of this growing demand was created by the mass production of automobiles following John Dunlop’s invention of the pneumatic tyre in the 1880s. This resituated rubber as integral to a burgeoning monopoly capitalism. Monopoly capitalism was further characterized by a solidification of the link between the plantation and the factory. Further, The Devil’s Milk reveals that this connection continued to extend beyond mere exchange. The systematically managed plantation and the scientifically managed factory became entwined. As Tully shows, the degradation of laborers in rubber factories in the United States through the brutal implementation of scientific management was at the same time dependent upon the implementation of regimes of colonial plantation production. Such a relationship is clearly presented through Firestone which operated both as a factory in Akron and as a plantation in Firestone, Liberia. Goodyear, Michelin & Dunlop established plantations globally as well.

The Devil’s Milk concludes with World War II and the struggle by Axis and Allied powers for rubber—“a crucial ingredient of the war machine” (343). Located next to Auschwitz, IG Farben, the largest European company at the time, used bonded (“slave”) labor from concentration camps to build a factory for the manufacture of synthetic rubber. The history is at once distinct from and at the same time resonant with preceding forms of coerced production. The reliance upon concentration camp labor reveals the use of bonded labor not at plantations but in the manufacture of a factory for rubber production. Such moments seem to suggest that the relationship between coerced labor and capitalist production appears, not as a stage in the transformation from pre-capitalist to capitalist production, but as a potentiality embedded within capitalism itself.

But, in explaining the exact structural relationship between various forms of bonded labor and capitalist production, The Devil’s Milk is at its most opaque. Discussing the relationship between rubber extraction and industrial manufacturing, Tully writes that “The manufacturing industry was essentially supplied by a primitive pre-capitalist ‘mode of extraction’ that resembled feudalism and contained elements of slavery” (62). Yet, describing plantation production and drawing upon Ravindra K. Jain, Tully suggests that the lines between slavery and wage labor were blurred in plantation settings dependent upon bonded “coolie” labor. Certainly, it is plausible that rubber extraction maintained a rigid division between capitalist and pre-capitalist production while rubber plantations blurred the line between slavery and wage labor, but the exact reason for this remains unclear just as the exact relationship between bonded labor and capitalism does more generally. Despite this, the historical trajectory of The Devil’s Milk seems to reinforce Jairius Banaji’s contention in History as Theory that there is an “incoherence” which attends “the concept of free labor under capitalism” (2010, 134).

The Devil’s Milk is also at times encumbered by terminological dilemmas. Writing of the Congo, Tully states the Belgian colonial police recruited members from the “most savage tribes of the upper Congo” (107). The resistance of plantation laborers is described in a section entitled “primitive protests” (260). Perhaps evoking Eric Hobsbawm’s influential Primitive Rebels, such phrasings at the same time have the unintended consequence of reinforcing the rhetorical practices that The Devil’s Milk elsewhere powerfully and rightfully suggests are necessary to overturn.

Still, The Devil’s Milk is a luminous history of class antagonism, conflict, and struggle. Tully masterfully brings together ostensibly disparate histories and demonstrates profound interrelation forged through and against a global regime of rubber production. From Tran Tu Binh, the Vietnamese revolutionary who labored on a Michelin plantation in Vietnam, through the IWW militancy in Akron, to the concentration camps of the Nazi regime, Tully powerfully displays a materialist approach to history that never loses sight of telling the story of those who were subjected to exploitation through production.

With The Devil’s Milk, John Tully has produced a significant work that demands wide readership, consideration, and debate. Documenting capitalist hell, Tully serves as a captivating Virgil as he guides readers through rubber’s many layers. Dedicated to those who resisted and documented rubber’s atrocities, The Devil’s Milk serves as a forceful reminder that embedded within antagonism and conflict are multiple possibilities not only for the prolongation of this hell but also exit from it.