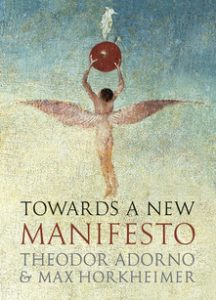 Theodor W Adorno and Max Horkheimer
Towards a New Manifesto

This pocket-sized book details a fascinating conversation between philosophers Theodor W. Adorno and Max Horkheimer at the University of Frankfurt in the spring of 1956. In a series of open-ended meetings, both men discuss how philosophical inquiry might still critically intervene in a world subsumed by rational administration and ideological indoctrination at the onset of the Cold War. Each meeting was recorded in a protocol by Adorno’s wife, Gretel, his ever-present intellectual confidante. This project continues a dialogue that originated in 1939, and explores the possibility of writing a modern-day version of the Communist Manifesto – or, in Adorno’s words, a ‘strictly Leninist manifesto’ (94). With the aim of politically intervening in contemporary society, this exchange sketches a potential blueprint, however modest, for the future prospects of Marxism as both an intellectual discourse and a revolutionary practice.

This discussion between Adorno and Horkheimer was influenced not only by their close intellectual partnership, but also by a significant moment in their academic careers. Having returned from American exile in 1949, and now actively affiliated with the University of Frankfurt, both men had already established themselves as prominent philosophers in West Germany. Horkheimer was approaching retirement (1959), and Adorno was poised to become a full professor (1957) and the director of the Institute for Social Research (1959).

In their exchange, Adorno and Horkheimer traded many provocative insights about topics such as the fetishization of labor, the dialectic of theory and practice (in the absence of a political party), and the relationship between domination and freedom in late capitalist society. Despite their predilection for rigorous debate, both men often oscillated between moments of deep despair and cautious optimism for the future of humanity – and, in this regard, hyperbolic statements were not uncommon. It might surprise some readers to see how unrelenting Horkheimer was in his pessimism, since, for him, society was heading toward an apocalyptic event in which Nazism would be considered a ‘relatively modest affair’ (57).

Two threads of their conversation stand out for their passionate engagement. In the first, Horkheimer remarks how America and Europe are still the ‘best civilizations’ in world history in so far as ‘prosperity and justice are concerned’ (35). He and Adorno recognized that, notwithstanding some powerfully persistent social inequalities, there existed enough material wealth and progressive political freedoms to care for everyday people. In order to ‘ensure the preservation of these gains’, they advocate a socially engaged philosophy that would – as in Marx’s famous dictum – remain ‘ruthlessly critical’ of the status quo (36). It is worth remembering that even in their most trenchant critique of America, they were still fully aware of the fact that sunny California – the epicenter of the culture industry – had provided them with a refuge from Nazi Germany.

In the other thread, Adorno and Horkheimer argue for the importance of ‘solv[ing] the problem of theory and practice’ (55). They asserted that only a critical, self-reflective philosophy could accomplish a true critique of modern society, without falling into the trap of mere affirmation. There were indeed sharp differences in methodology between them, with Horkheimer often questioning the viability of any programmatic assault on the forces of reification. Even if Marxism could not be actualized in view of Chinese and Soviet transgressions, they believed that it could, at the very least, survive in the form of theory as resistance. For, as Horkheimer declares: ‘All hope lies in [critical] thought’ (39-40). In this discussion, Adorno and Horkheimer struggle with how to revamp their intellectual project in a post-WWII world, in which Marxism was vanquished in the West and perverted in the East. For them, the burning question remained of how any revolutionary movement could still be objectively possible in this new state of emergency.

The dialogue between Adorno and Horkheimer unfolds as a kind of ‘philosophical jam-session’ (ix) that exceeds any expectations of normalized academic discourse. In fact, reading the philosophizing between these two men is actually quite enjoyable: one is not characteristically confronted by Adorno’s opaque or Horkheimer’s dry philosophical prose. Rather, one encounters a spontaneous conversation that aficionados could envision their having as young intellectuals over coffee and torte at the Café Laumer in 1920s Frankfurt. Despite their seriousness of purpose, there are many odd exchanges, like their strange obsession with ‘motorbike riding’ as misguided juvenilia (12, 51, 86) – a conclusion that C. Wright Mills would probably have found amusing.

Prospective readers of this book should be aware that the actual text is only about 10,500 words long. That is to say, the discussion is really more a collection of notes toward an investigation than a sustained and fully developed critique. The text is translated from the original version in Horkheimer’s Collected Works, where the editor Gunzelin Schmid Noerr gave it the title ‘Discussion about Theory and Practice’. It is skilfully translated by long-time Adorno scholar, Rodney Livingstone, providing an important level of continuity with other primary publications in English.

Although this translation duplicates some of the footnotes from the Horkheimer edition, the book would have benefited significantly from a more substantial critical apparatus – one that includes, like the German version, a detailed literary provenance of the text and wide-ranging explanatory footnotes. Because their exchange contains numerous references to geopolitical events of the 1950s in America, West Germany and the USSR, scholars working in ancillary fields might not readily understand some of their contextualisations. This concern, however, does not detract from the intrinsic value of this book. Experienced researchers, who are proficient in German, will, however, likely benefit more from the original publication.

Books are always interpreted in light of the particular historical moment in which they appear: their actuality (to borrow Benjamin’s celebrated term) is just as important as their argumentative thrust. The year 2011 was characterized, on the one hand, by striking socio-economic inequalities and dangerous reactionary politics and, on the other hand, by new forms of emancipatory practice like e-democratic mobilization and hacktivism. From this viewpoint, Horkheimer’s optimistic pessimism – coupled with Adorno’s belief in the possibility that ‘things can [indeed] come right in the end’ (61) – insists that the debate over theory and practice is still a decisive one for the new millennium. Perhaps this little book can inspire its readers to continually disrupt the machinery that welds together the entire world into a ‘single context of delusion and disaster’ (85).