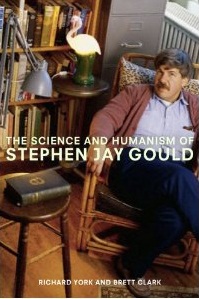 There are introductions, and then there are critical introductions. There are books that introduce the reader to an important thinker, laying out the major themes of that thinker’s work and thought. And then there are books that introduce a thinker, but also aggressively interrogate that thinker’s work, asking hard questions and refusing to accept weak answers. Richard York and Brett Clark’s The Science and Humanism of Stephen Jay Gould offers a sophisticated and intelligent survey of the work of renowned Harvard biologist and leftist Stephen Jay Gould. It’s a good introduction, but it’s not very critical.

York and Clark start with Gould’s contention that ‘the neo-Darwinian orthodoxy needed to be revised and expanded in light of the discoveries and reconceptualizations that had occurred over the latter half of the twentieth century.’ In his magnum opus, The Structure of Evolutionary Theory (2002), Gould organized these proposed revisions into three categories, each of which identified a specific site for change. Changes were needed, thought Gould, at the levels of agency, efficacy, and scope (19). At the level of agency, Gould challenged the view that evolutionary change took place primarily at the level of individual organisms or, even worse, genes. Instead, Gould argued that natural selection took place at multiple levels. At the level of efficacy, Gould contended that structural features of organisms importantly constrained natural selection. The Irish Elk grew enormous antlers, not because their enormity helped them win fights or attract mates, but simply as a consequence of the elk’s overall increase in size; ‘among deer, antlers grow at a faster rate than body size, so that simply increasing the body size of a deer without altering the relative growth rates of different parts will lead to an animal with very large antlers’ (57). At the level of scope, Gould contested the dominant assumption of gradualism within biology. Instead, he articulated (with fellow biologist Niles Eldredge) a theory of punctuated equilibrium, in which long periods of stability alternate with periods of rapid change.

York and Clark organize their book around agency, efficacy, and scope. In doing so, they present Gould’s criticisms of mainstream biology in a competent and professional manner. But York and Clark offer more than just a synopsis of The Structure of Evolutionary Theory (though given the massive size of the latter book—1464 pages—a simple synopsis would have its own value). ‘The central contention of this book,’ they write, ‘is that Gould had powerful insights about nature and humanity and an engagement with his work can enrich both science and humanism’ (7). Gould’s critique of mainstream evolutionary theory, in other words, has significant implications both inside and outside of biology. It is completely understandable that York and Clark would make this the central contention of their book; Gould would surely have endorsed this claim, and the arguments York and Clark make regarding both biology and humanism are almost entirely arguments Gould himself made or would have made.

It is one thing to present Gould’s own views on science and humanism. It is quite another, however, to show that those views are valid. Here York and Clark adopt a rather uncritical approach. One can ask many difficult questions about Gould’s scientific claims and their implications for humanism. By and large, these questions do not get asked.

Take the significance of Gould’s critique of mainstream evolutionary theory. As York and Clark acknowledge, many of Gould’s points regarding agency, efficacy, and scope in evolutionary theory are far from universally accepted among biologists. York and Clark believe that Gould had it right, and that his scientific ideas will ultimately be vindicated. But they seem to hedge their bets. They do not wish the humanistic implications of Gould’s biology to be undermined if the scientific community identifies real problems with the latter. And so at several points they suggest that Gould’s critique of evolutionary theory has great value even if his specific claims turn out to be false. For example, in discussing Gould’s argument regarding agency, they write that ‘The hierarchical theory of selection has been highly controversial and is widely criticized. Our interest is not in defending it per se, but rather in pointing to the value of the conceptualizations that underpin it’ (24). It is unclear how, if Gould’s hierarchical theory proved false, the conceptualizations underpinning it could have value. Later, York and Clark claim that ‘Gould and Eldredge were not arguing that gradualist or punctuationalist views are either “right” or “wrong” per se, but rather, different views may have various degrees of utility in helping us to understand the patterns of nature’ (34). I do not see how Gould and Eldredge could accept this claim; surely if their work on punctuated equilibrium has any value, it can only be because the ‘patterns of nature’ indicate something different from what the gradualist theories predict. The latter implies slow change over time; the former implies little or no change most of the time and rapid change over (relatively) brief intervals. Whatever their differences, Gould and his critics would surely agree that scientific views must ultimately be abandoned when the data refuses to support them; York and Clark seem reluctant to accept this point.

York and Clark are reluctant to give up on any part of Gould’s project in biology because they share Gould’s devotion to humanistic principles. They understandably fear that because the project in biology supports the principles, the latter would be endangered if the former ran into trouble. And yet many of the connections Gould drew between science and humanism are also controversial. Rejecting parts of Gould’s scientific work might not prove as devastating to Gould’s humanism as Gould himself seemed to think. York and Clark scarcely consider the possibility; rather, they restate the ties Gould believed could be drawn between science and humanism, without pausing to consider their validity.

Consider, for example, Gould’s views on historical contingency. In such works as Wonderful Life: The Burgess Shale and the Nature of History (1990), Gould argued forcefully against the idea that there is a predetermined path along which evolution unfolds—towards greater complexity, for example, or greater intelligence. York and Clark endorse this claim, and argue that ‘if contingency dominates history, the future is open, and the world can be another way, as radicals of all types have long believed’ (68). York and Clark may have a point; perhaps a belief that historical development follows predetermined laws does prevent one from envisioning a better society and fighting for it. But is it really obvious that ‘radicals of all types have long believed’ this? I seem to recall a pair of radicals who long ago contended that ‘What the bourgeoisie, therefore, produces, above all, is its own grave-diggers. Its fall and the victory of the proletariat are equally inevitable.’ Not much contingency dominating history there.

Unfortunately, York and Clark pretend that they have never heard of ‘scientific socialism.’ Instead, they incredibly claim that ‘Gould stressed, similar to Karl Marx and other radical thinkers, that we make our own history and that the future is open’ (my emphasis, 91). Claiming that Marx was a straightforward opponent of historical determinism is a little like claiming that Plato was a democrat. York and Clark would do much better simply to acknowledge that radicals have disagreed vigorously on the implications of historical determinism; instead, they pretend that these disagreements never happened.

Finally, there is at least one important part of Gould’s thought that York and Clark pass over in silence. It is instructive to consider why they might do so. York and Clark devote an entire chapter to Gould’s ‘subtle and nuanced view that the humanities, including art, and the sciences have legitimate and separate domains, while arguing that there are important connections between these fields of study and that the boundaries between the two should not be rigidly enforced’ (174). But in his book Rocks of Ages: Science and Religion in the Fullness of Life (1999), Gould further argued that religion and the sciences have ‘legitimate and separate domains,’ which he called non-overlapping magisteria (NOMA). Many of Gould’s most devoted admirers find this argument hard to stomach; they prefer the more straightforwardly antireligious perspective Gould expressed in such passages as the following: ‘We pass through this world but once. Few tragedies can be more extensive than the stunting of life, few injustices deeper than the denial of opportunity to strive or even to hope, by a limit imposed from without, but falsely identified as lying within’ (17). I suspect York and Clark share this disappointment with Gould’s most substantive treatment of the topic of religion. But rather than acknowledge that even Gould had bad days, York and Clark choose to ignore this misstep; Rocks of Ages merits nary a mention in the book.

In the end, The Science and Humanism of Stephen Jay Gould does what a good introduction should do. It provides an accessible gateway to the major ideas of the subject. It will no doubt motivate many readers new to Gould to investigate his work in more depth. But when those readers do so, they may find themselves asking harder questions of Gould than York and Clark were willing to ask.