Marx & Philosophy Review of BooksReviews‘Anarchism and Syndicalism in the Colonial and Postcolonial World, 1870-1940: The Praxis of National Liberation, Internationalism, and Social Revolution’ reviewed by Andrew Lawrence 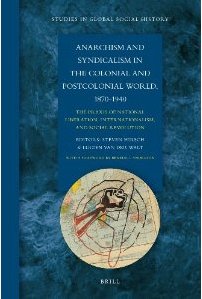 Steven Hirsch and Lucien Van Der Walt
Anarchism and Syndicalism in the Colonial and Postcolonial World, 1870-1940: The Praxis of National Liberation, Internationalism, and Social Revolution

Andrew Lawrence is an Honorary Fellow at the University of Edinburgh, and currently Research Fellow …

A spectre is haunting the Euro, the European Central Bank, and the broader European Union project: the spectre of anarchy. The fear grows that if the euro collapses there will be no end to the centrifugal forces unleashed. This same fear grips the World Trade Organization in the wake of the collapse of the Doha round of trade talks. Yet when it comes to theorizing anarchy as a political project, it would seem that this same spectre is haunting Occupy Wall Street activists. The `99 percent’ are defined by their exclusion from the one percent (or fewer) who own and control transnational corporations, and their solidarity is forged in battles against the state. But their antipathy to building organizations has hitherto hindered their capacity to confront and bargain with the 1 percent, as well as further build their own nascent identity.

Activists are learning again the lessons that organizations and associations can be more or less democratic and accountable, more or less committed to egalitarian principles and outcomes, and more or less effective in realizing these ends. The edited volume under review contains a wealth of experience drawn from the colonial and postcolonial worlds for activists to reflect upon and scholars to debate.

Just as party-centered socialist movements and organizations have displayed immense range in their size, coherence, and relevance, so too have their anarchist counterparts. While demonized for advocating and practicing ‘violence of the deed’, more representative and durable were the voluntary associations of solidaristic mutual assistance, unions, and local organizations that blunted the thrusts of state absolutism in an array of pre-democratic contexts. As the editors argue and the various chapters on Egypt, South Africa, East Asia, Eastern Europe, Latin America and the Caribbean attest, anarchist movements and organizations developed prominence outside of the Western European cases that have captured disproportionate attention among historians.

In his Introduction, Benedict Anderson (xv) argues that three characteristics set anarchist movements apart from other contemporaneous left movements in their heyday of the late nineteenth to early twentieth centuries: respect for and attention to peasants and agricultural workers; practical commitment to internationalism, rooted in imperial and diasporic networks; and a ‘utopian élan’ animating their worldview. I would quibble a bit with this characterization: regarding sector, in addition to rural workers, we should add many of the less skilled workers, in both services and in industrial sectors; instead of ‘internationalism’, I would emphasize ‘transnational’, regional, ‘existential’ or hybridic cosmopolitanism; and observe that in practice, ‘utopianism’ most successfully entailed an openness to practical experimentation. Each of these elements is further elaborated upon below.

Regarding experimentation, particularly in the context of state absolutism and regime despotism, as in Southern and Eastern Europe and South America, weaker liberal and social democratic traditions made anarcho-syndicalist voluntarism more of an immediate necessity than a far-off utopian ideal. The social location of its theorists also tempered anarchist utopianism with practical and immediate strategies and concerns. While the anarchist tradition is most often associated with theorists such as Mikhail Bakunin, Peter Kropotkin, and Emma Goldman, this volume brings to light the comparatively forgotten ‘organic intellectual’ figures such as Sebastian Faure, Jean Grave, Errico Malatesta and Giulio Sorelli, among countless others. Although their writings are unlikely to attract future mass readerships, in their day their writing and speeches were often decisively influential.

The career of Errico Malatesta provides a noteworthy example of how the ideal and practical can be combined. He appears in both the chapter on the anarchist movement in Egypt by Anthony Gorman, as well as the chapter on Paulista syndicalism in Brazil by Edilene Toledo and Luigi Bondi, with influence upon syndicalists from the United States and Mexico to Peru. Malatesta’s emphasis upon persuading as many as possible of the need to achieve ‘the full development of material, moral and intellectual freedom, not for the isolated individual, not for members of some class or a certain party, but for all human beings’ (Toledo and Biondi: 377) clearly indicates an egalitarian utopianism. At the same time, his record of practical activism on three continents – Europe, Africa, and South America – was arguably superior to those of virtually all of his Second and Third International contemporaries. As Gorman relates, Malatesta’s Italian anarchist network in Egypt made major inroads into the Greek, Arabic speaking, and Francophone worker communities, with their publications translated into each of these languages.

The regional and hybridic (rather than reductively national) character of anarchism is also emphasized by Dongyoun Hwang, in his chapter on Korean and East Asian anarchism. With a political project intimately bound up with the ‘national question’ in Korea, there was a constant flow of influence and movement among anarchists on either side of the Sea of Japan as well as with their Chinese counterparts. The more radical union confederation in South Korea traces its roots to these anarcho-syndicalist groupings. Similarly, anarchists in the Caribbean (including, prominently, those based in Puerto Rico and Cuba) moved freely to and from the Southeastern United States, Mexico, Panama, and various other islands (and another network moved freely across the Southwestern U.S.-Mexican border) in order to organize agricultural workers, as the chapter by Kirk Shaffer relates. This transnational region was shaped not only by geography but also by the massive wave of Spanish immigration, bringing Spanish anarchist influence to all of the above countries, especially Cuba, and by U.S. economic and military expansion. At a time characterized by mass hysteria over both legal and illegal immigration from Latin America to the United States, it is often forgotten that a de facto regime of free labor migration existed throughout the Americas in the nineteenth and early twentieth centuries, one actively promoted by major U.S. corporate concerns. Indeed, nationalism (including in the guise of the American Federation of Labor’s ‘internationalism’) and chauvinism chronically bedeviled anarchist articulations of transnational solidarity.

This is not to argue, however, that this fin-de-siècle phase of anarchism left no enduring legacies. Its success in helping found enduring institutions, from the General Confederation of Labour (CGT) in France as well as Spain, to the major unions and federations of Argentina, Brazil, elsewhere in Latin America, Ireland, and Japan, together with a more recent presence in such far-flung locales as Bolivia, Chiapas, Cuba, Egypt, Indonesia, Karnataka, Korea, Nigeria, Peru, Sierra Leone, Syria, and the Ukraine, with a combined membership in the tens of millions, shows that a current of anarchism has been deeply influential worldwide.

Nor were their labor movement roles and impact confined to the agricultural sector. As Geoffroy de Laforcade relates in his chapter on Argentina, anarcho-syndicalist influence there extended beyond meatpacking and plantation workers to railworkers, mariners, and especially longshoremen, where their influence survived into the Peronist period. Syndicalists also played a major role in organizing Southern African (including Southwest African) dockworkers, rail and transport unions, commercial workers, as well as miners. They organized workers not only in the sugar and cotton plantations, but also in the textile factories and copper and silver mines of Peru. The list could be extended indefinitely; the point being that sectors and unions traditionally associated with socialist- and communist-allied movements often also had significant syndicalist or anarchist roots.

Moreover, the anarchist movement’s relation to the social democratic and communist traditions in these and other countries is immensely complex and variable, ranging from close cooperation and cross fertilization to outright conflict. As van der Walt argues in his chapter on South African syndicalism, far from representing diametrically opposed strategies and worldviews, South African socialists and communists were indebted to early anarchist currents. He points out that several early South African unions were local branches of the International Workers of the World, connecting them to the Wobblies of the Americas as well as syndicalists of Europe; labor movement activists’ worldviews then were more cosmopolitan then than they were to become for most of the rest of the twentieth century. And as Arlif Dirlik relates with reference to Chinese anarchism, although it suffered from excessive abstractness, its various strands enjoyed lasting legacies: the ‘strong utopian strain’ of its ‘Paris’ variant included the goals of universal education as a means to cultural and social revolution; ‘Tokyo’ anarchists were forerunners of feminism, influencing Maoist attempts to devise alternatives to Western capitalist and Soviet socialist development projects; and Guangdong anarchists decisively shaped the labour movement, especially in southern China.

In their thoughtful concluding chapter, Hirsch and van der Walt consider the question of continuities versus discontinuities between the early and late twentieth century expressions of anarchism. Whereas some writers suggest that the current version is concerned with ‘new critiques of power’ along the axes of gender, sexuality, ethnicity, ecology, technology, and consumption – in short, concerning ‘lifestyle’ rather than work – the editors of this volume argue that this contrast is overdrawn, since many if not all of these thematic issues had their counterparts in the older anarchist movement, and indeed, the more blinkered expressions of the current one are hardly representative. Similarly, a carnivalesque sensibility that mocked power and convention disrupted routine, and staged direct action, infused the older expressions of anarchism as well. Their important legacies include their transnational activism and cosmopolitan ethos, their universalism, and their commitment to holistic individual as well as collective emancipation.

Nonetheless, the consequences of the collapse of empires and of the two World Wars had major material and ideological ramifications that contributed to the discontinuity (if not complete break) between the two eras. Macrohistorical and macropolitical perspectives are also complicit in the erasure of anarchist contributions to not just the political culture but also parties and institutions of countries in both the Global North and South. It must be conceded, however, that a tendential antipathy to institutions and record-keeping among many anarchists contributed to their historical silencing (a deficit that state surveillance archives the world over could surely contribute to eliminating). In the current era of the digital revolution (assuming regular and reliable backing up of files), this is less likely to be a problem. At over a hundred euros, the hard cover edition of this volume will be out of reach for most anarchists, syndicalists, or workers in general. Hopefully, a paperback version is in the offing.